Turning a London needle or two into a bit of fun.

I took a train on Friday into London for my 3 monthly CT scan, results hopefully will come via phone next week. Anyway having a bit of spare time, and the need to take my mind off having had two needles put in me,  a few things caught my eye and I could feel a blog post rising up inside me.
There is a boating connection so all is not lost for those craving a canal fix. 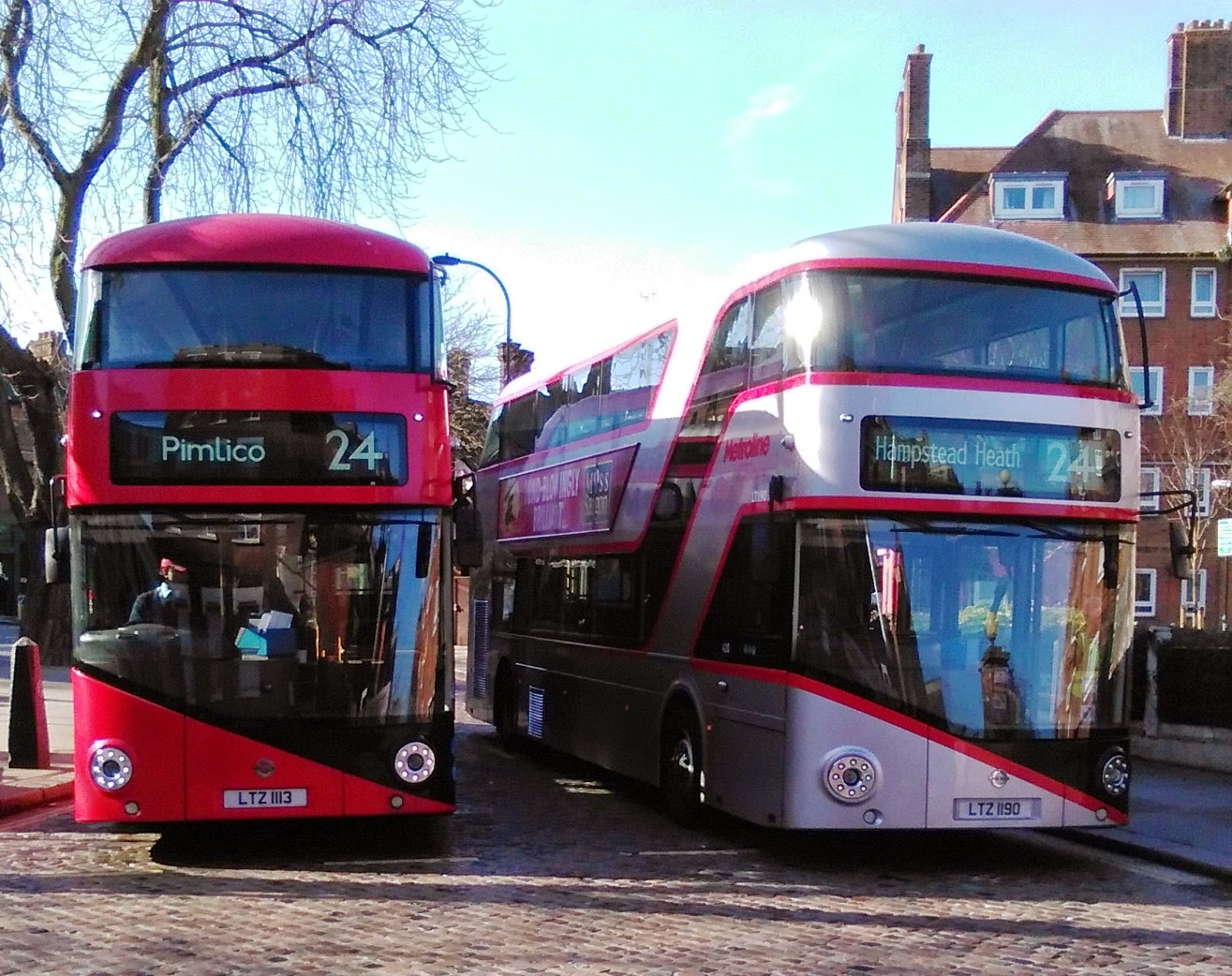 Look at these, buses? they look....well delicate and plastic like. What`s the one on the right doing on the road? it needs a coat of Red paint. The Red bus like the now almost extinct Red telephone box is famous all over the world. Not how I remember buses.
Now these are what I not only remember but also drove for a couple of years. The one on the left is a Routemaster introduced in 1959/60. It has power steering unlike the RT type on the right seen in London 1939-1979. Bus driver training in my day was like this and yes I actually had to pass this part of the exam to get a licence. The idea was not to allow the back to swing completely around but bring it under control and finish facing the building. Notice the crowd in front of the building; in the video they are enthusiasts but back in the day it would have been trainee drivers and conductors all watching, hoping for something to go wrong. One guy came through the skid and got the bus under control but was a bit short on the braking. He finished a few inches from the building and you never saw a crowd disperse so fast. I was twenty one and looked fifteen. It was a wonder any one boarded my bus. Nowadays I`m sixty six and look it. 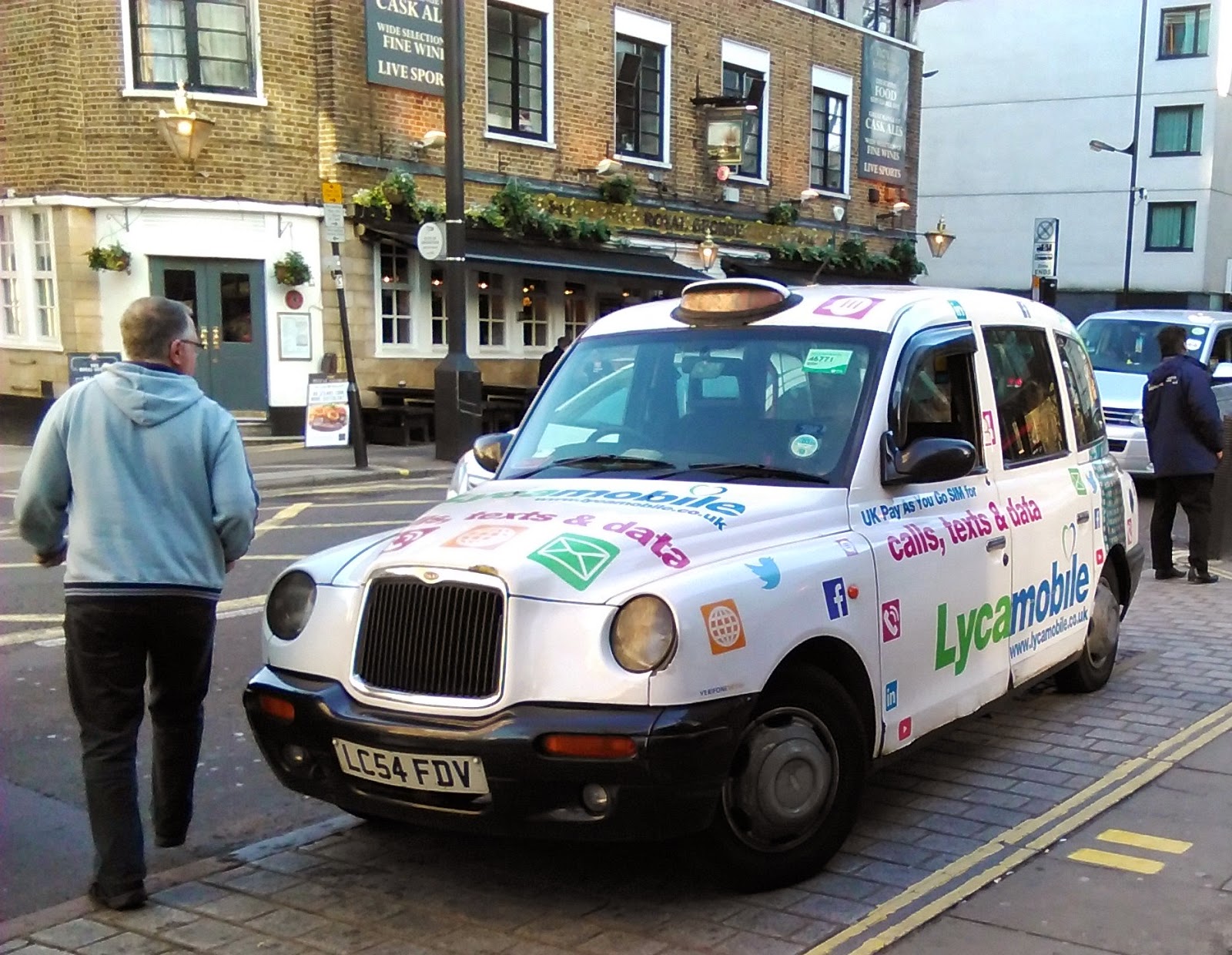 Another worldwide icon is London`s Black cab and they for sure were never covered in advertisements when I was younger. 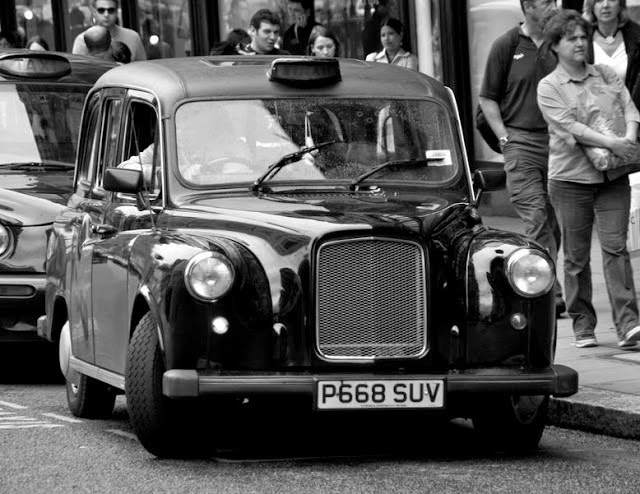 The good old Black cab driver a mind of information. I was back in the early 70`s loading plate glass onto an open back truck in Regents street. A bus went by and the truck rocked and a 5 foot square sheet toppled and tried to take my thumb off. Clamping a piece of rag over the gushing wound a passing cabbie stopped next to the truck called and took me to the nearest hospital and would not charge me. Muttering my thanks in a shocked voice I left that decent man cleaning the blood off his cab floor. I still have the scar today.

With my next picture tour around the capital I wish to report a theft. 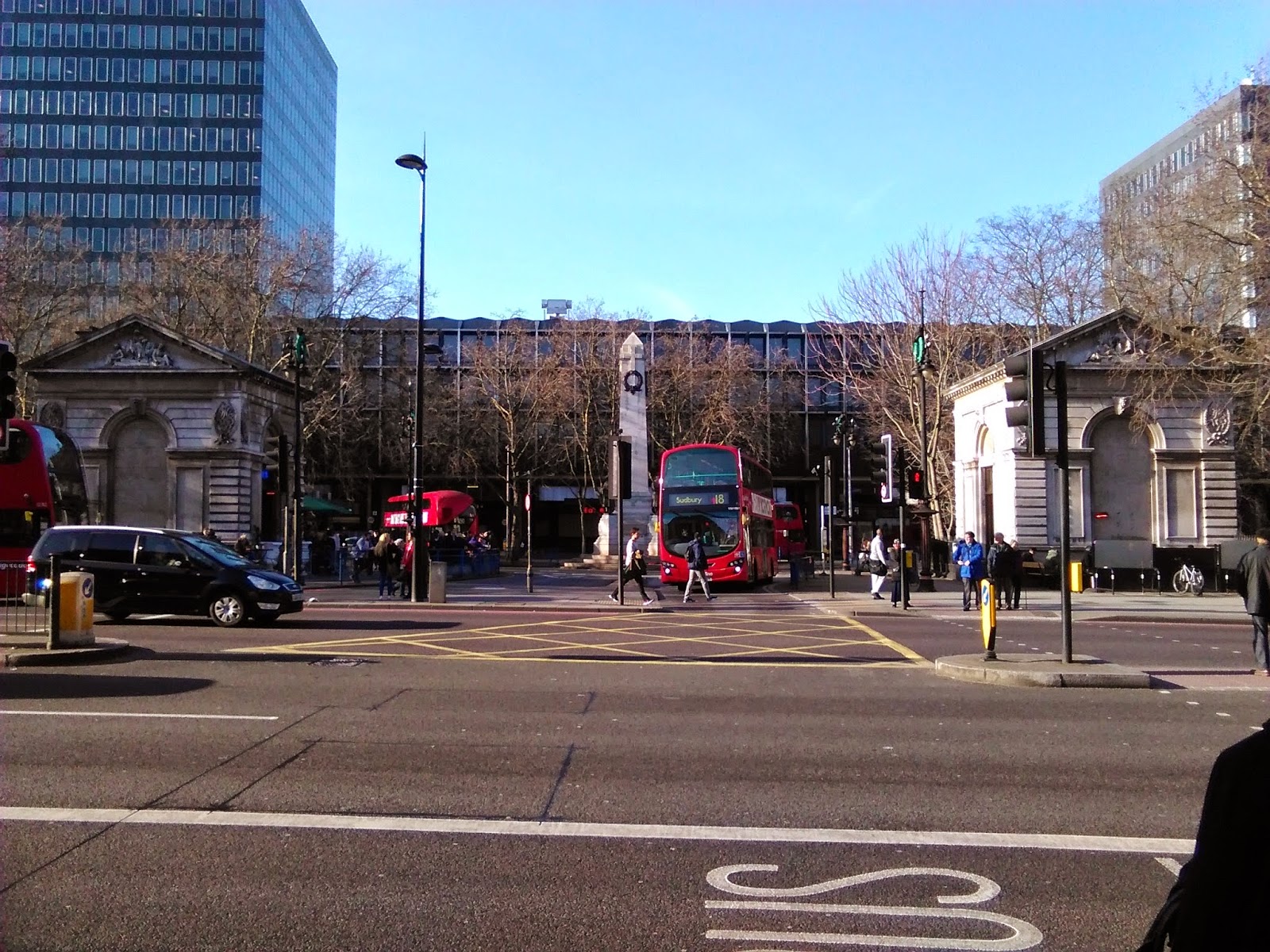 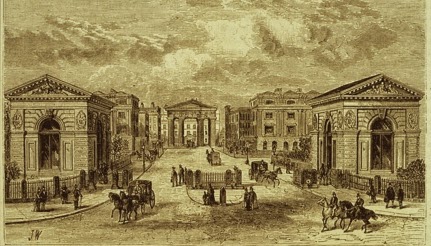 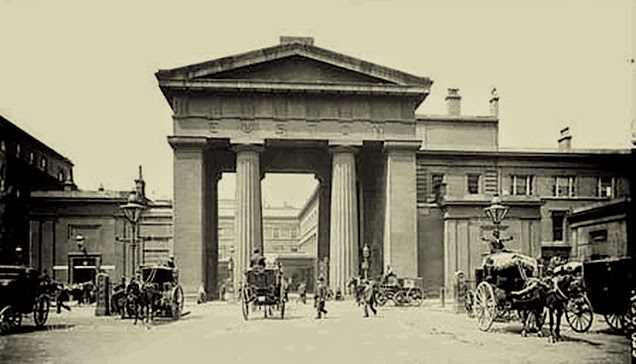 As you can see in the now and then pictures above something is missing. Look to the left. That arch was 70 feet tall, the fluted columns were 8 feet in diameter  and being a London boy I can tell you it was there in 1960. 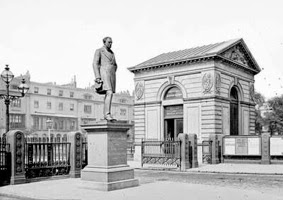 I had some time before my train would whisk me away from this madness, where nothing is the same any more, and deposit me back to the towpath where things in places haven`t changed for 200 years. That Robert Stephenson fellow was standing around in the modern day station and as I had photographic evidence that he was standing nearby back when I last saw the arch I had to ask. It seems our previous landlords British Waterways (BW) whisked most of the demolished arch away and deposited it in Prescott Channel up by the River Lea. Link 1    Link 2 A lot of the stone was found being used as a wall in the garden of one of the demolition gang. One hundred and twenty four years it stood there thirty years before St Pancras station was built. St Pancras was tuned into the Eurostar terminus within the existing building so why could they not have kept the arch. Where was the John Betjemen that saved St Pancras when this theft took place. Yes I know he tried.

The two present day lodges shown above were erected in 1870 and used as information and parcel
collection buildings. Nowadays you won`t find your parcels there but you can get a beer. Notice the names of places served by the railway carved into the Quoins.
The crest of the London and North Western Railway is carved above the Quoins. 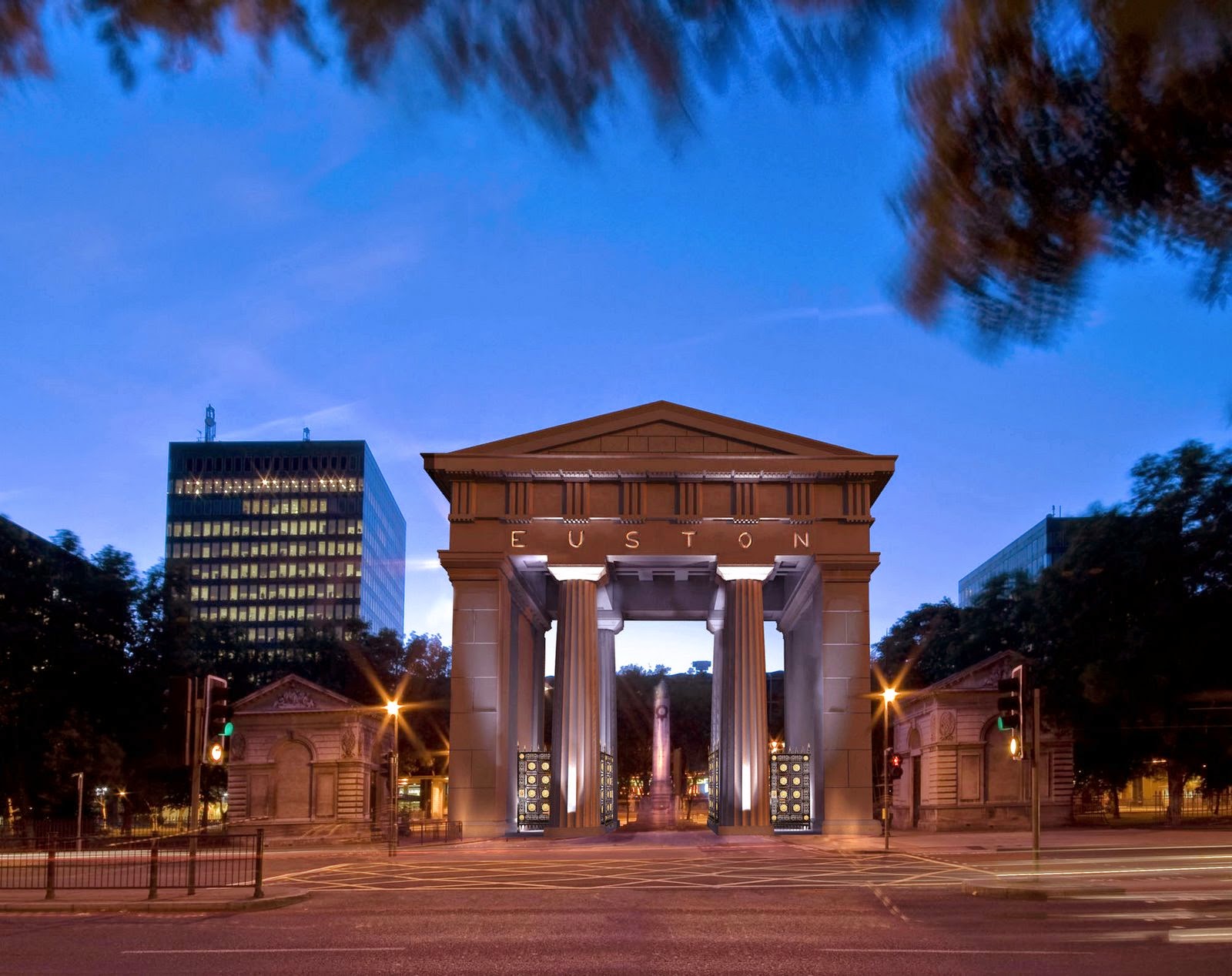 It could look like this (http://www.joerobson.co.uk/sai/home.html)  with the present day modern station to the rear. Just like along our canals to much of our history is just swept aside. Network rail intend a £1 billion modernisation of Euston and the Euston Arch trust would like to see the arch included. Just as a balance in case you think the arch should not be built. Personally I say bring it back, it just needs a clean.


Last picture in the camera on this trip is Greater London House a fine example of an Art Deco building in Camden It was nice to see it wasn`t on the missing list. 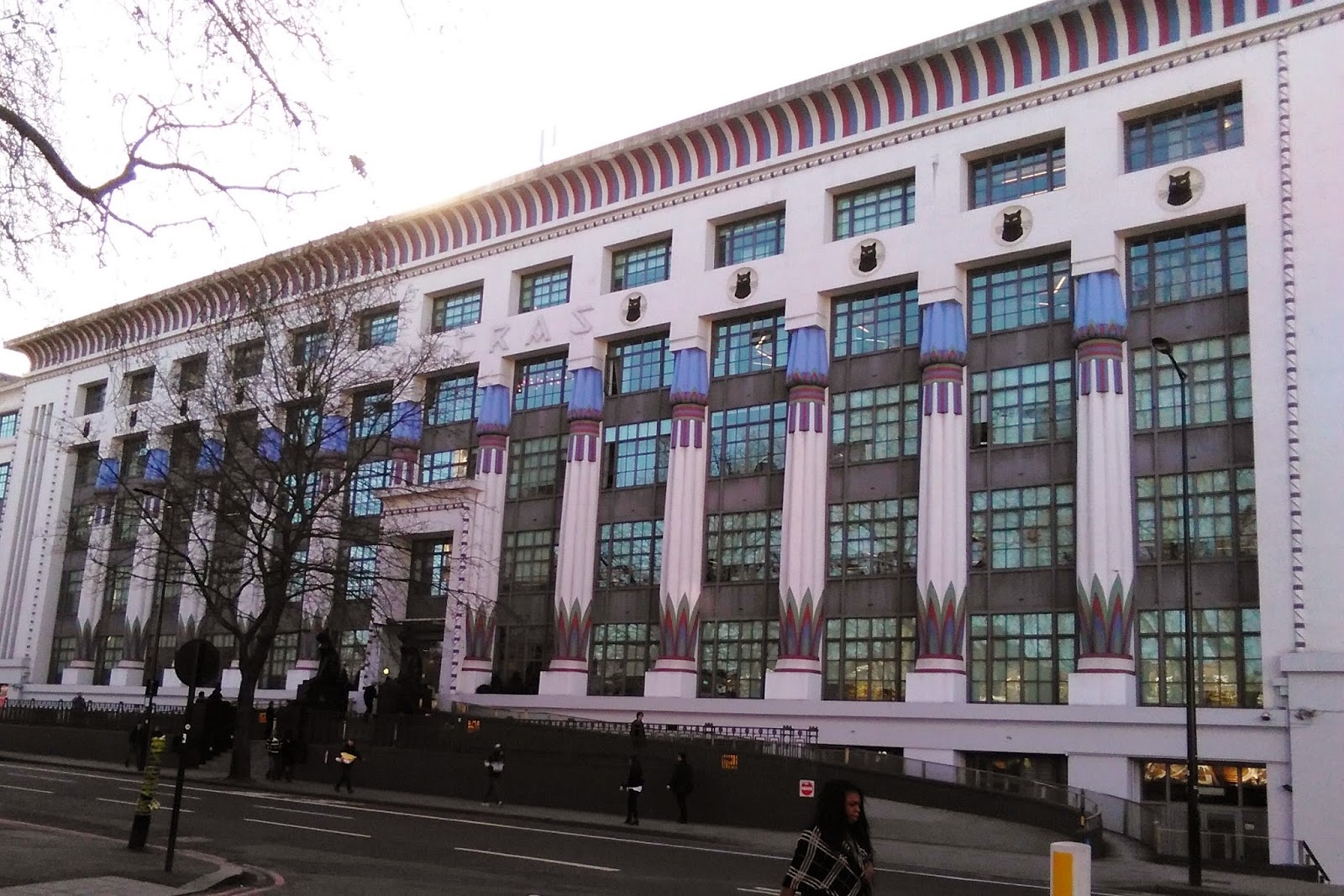 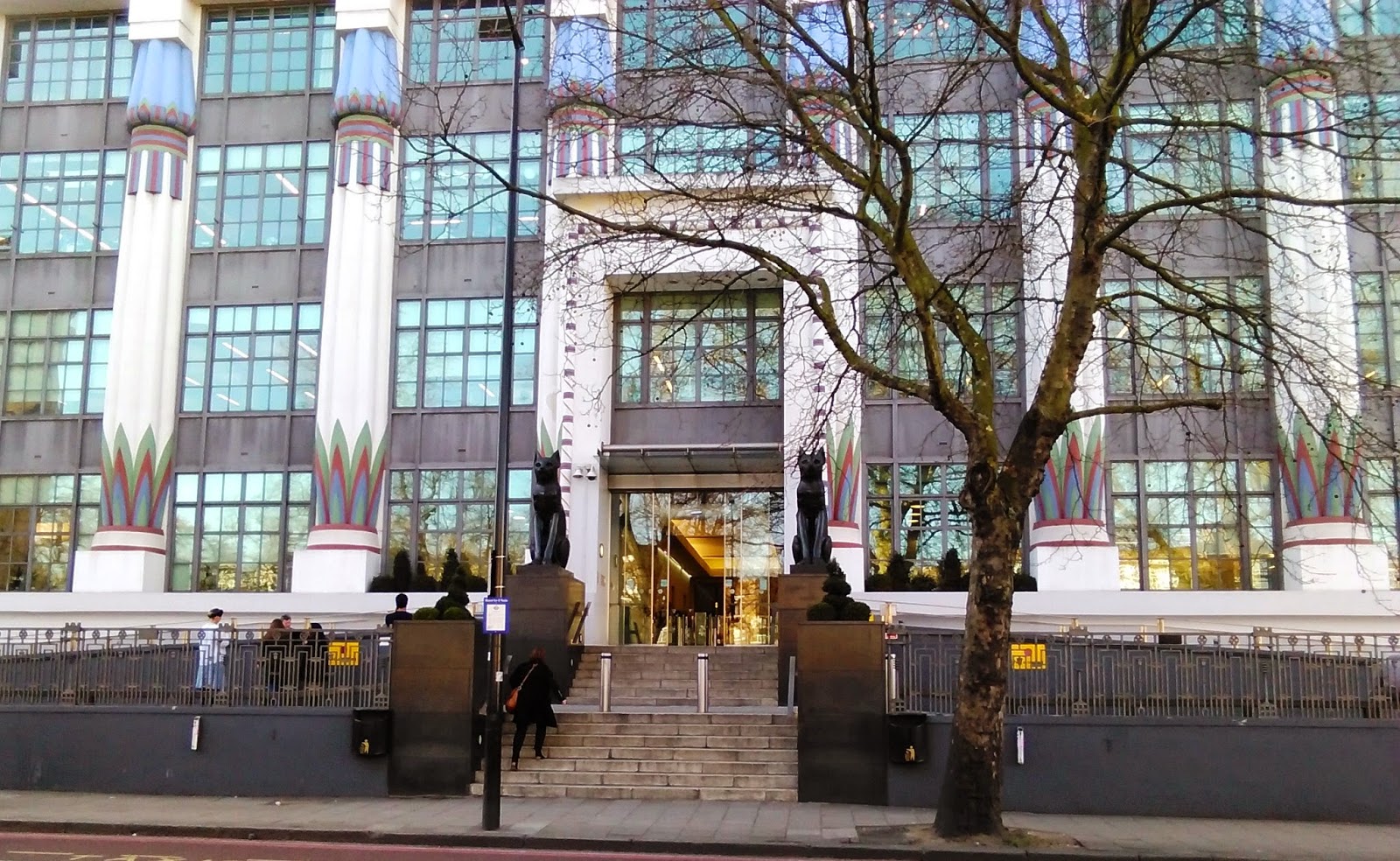 Oh my!
Do I remember the 18 bus? That was the transport of delight that took me to Primary School and more importantly brought me home again!
Carreras also played a part in my life as they had playing fields in Stanmore where my dad played a couple of times when he worked for ABC Cinemas. He went home to Wandsworth and told Mum he'd found a nice place in the country to buy a house. In those days the tube only went to Wembley Park so Stanmore pre-war was very rural. Hey ho. Good blog L and J. Be lucky. Mike

A brilliant blog Les, thank you!

Two distinctly different topics iMO.
I just realized how physically short a London coach/bus really is. Here the municipal coaches are much longer; only recently have they brought in shorter in length coaches for the non-rush hour crowd so to speak. Mind ourroads are wider and often have more turning radius on corners although even that doesn't prevent running over the curb sometimes.

As to those destroyed stone arches. here you'd never find the disused stone, it would be dumped in hoppers, on site and ground into small chucnks to be then transferred elsewhere and pulverized into a fine sand which would then be recycled into other objects of similar contnet.
Now as to the comment:
"Nowadays I`m sixty six and look it."
I don't believe it for a moment, and may I add as long as you don't act like your alledged age, all will be just fine. Besides, you have a young at heart wife
on board now who "will" keep you in line!

Hello Mike
Before the 18 I was going to school on an electric trolley bus.
Les

Hi Bryce
The RT type bus was about 30 feet. Hard to get round some tight corners with no power steering. Our roads are smaller and position was very important to get through some small junctions.
Here they also crush a lot of stone but I guess the area around the arch was small and the chance to ship the stone away was of help.
Les