On a bright chilly day we set off from Cow Roast along with George and Carol ong Wb Still Rocking with the intention of mooring at Bulbourne for a few days. 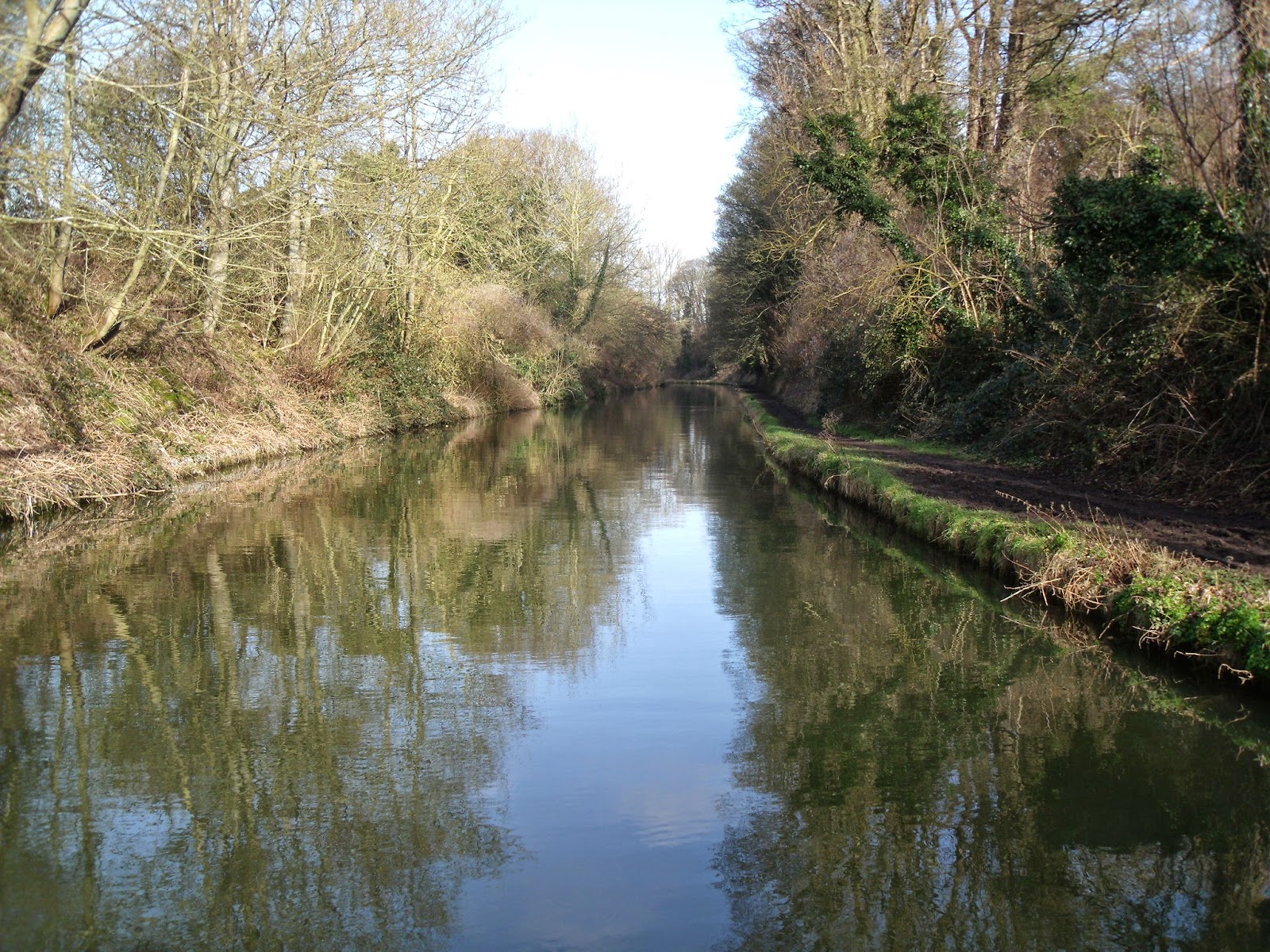 Along Tring cutting it is just a 2.5 mile trip pretty much as pictured all the way. 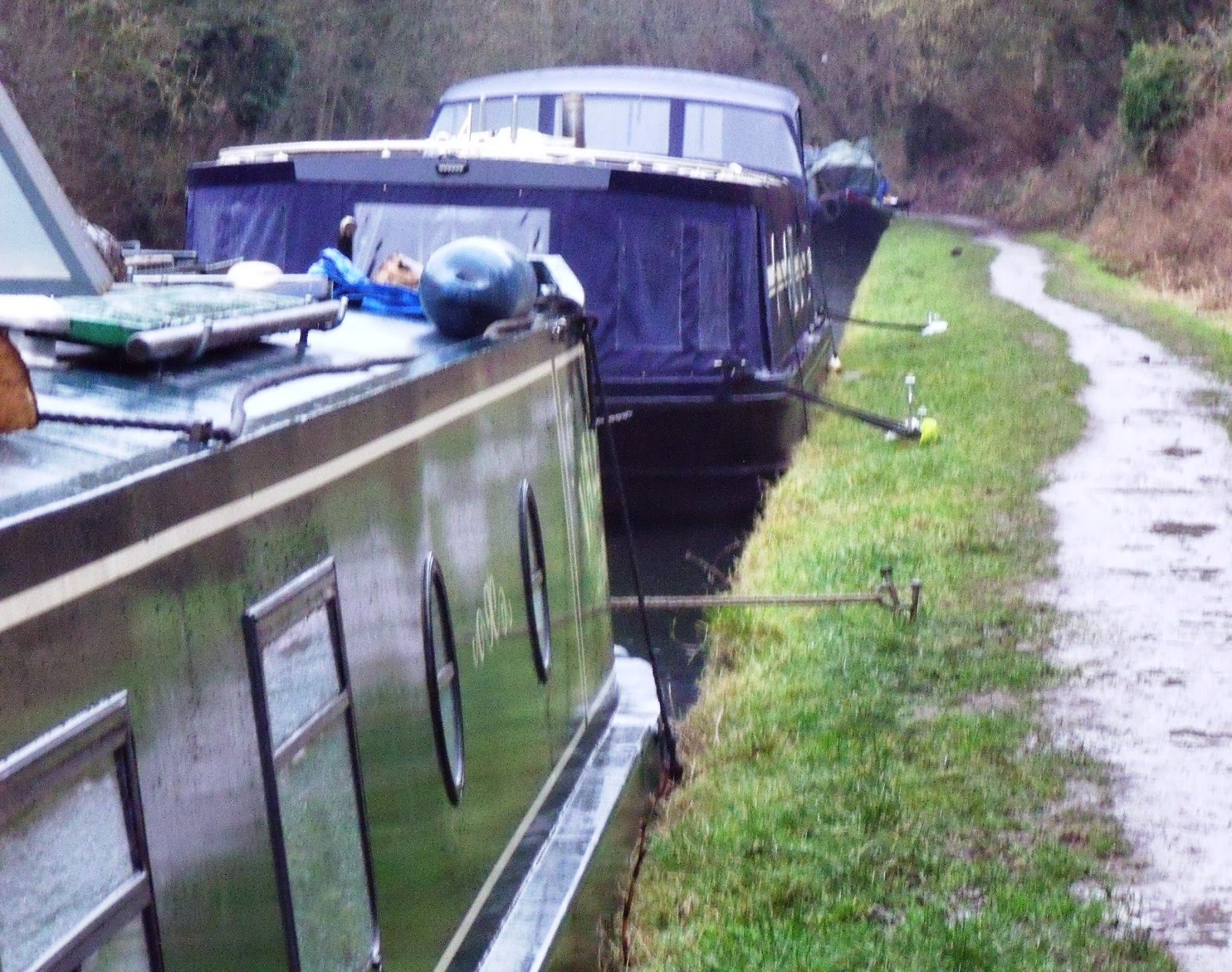 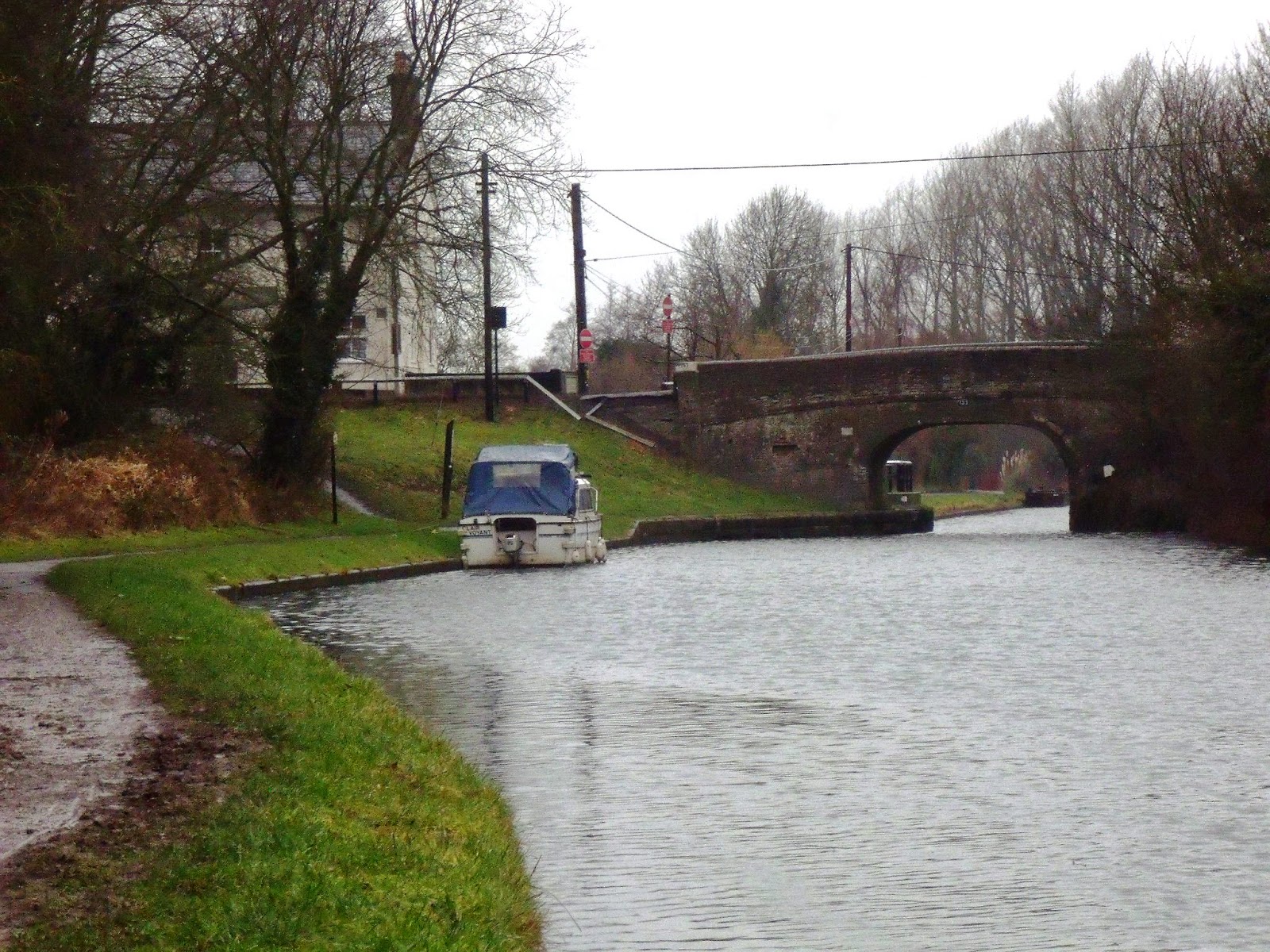 crossing the bridge towards Tring. Jaq and I also used the bus to visit family in Thame.  The Grand Junction arms pub built in 1852 can just be seen through the trees to the left of the bridge. Good food is why Jaq and I have visited many times.
After a few days it came to our attention that an emergency had closed the Marsworth lock flight just a half mile ahead. This gave us little concern as the planned stoppage at Milton Keynes does not finish until mid March so there is no rush.

This is a typical canal junction scene. The bridge I am standing on spans the Wendover arm canal that branches off to the left. On the right is the main line of the Grand Union canal that 37 miles and 56 locks to the south connects to the River Thames. At 6 hours per day it will take about 4 days. This is the lock that is defective.


The building to the left of the bridge was built as a toll house for the canal company in the early mid 1800`s. Over to the right is a wet dock built over an old single lock that was  widened when the building was erected. Most of  the locks from here all the way to
Stoke Breurne had a single  lock built 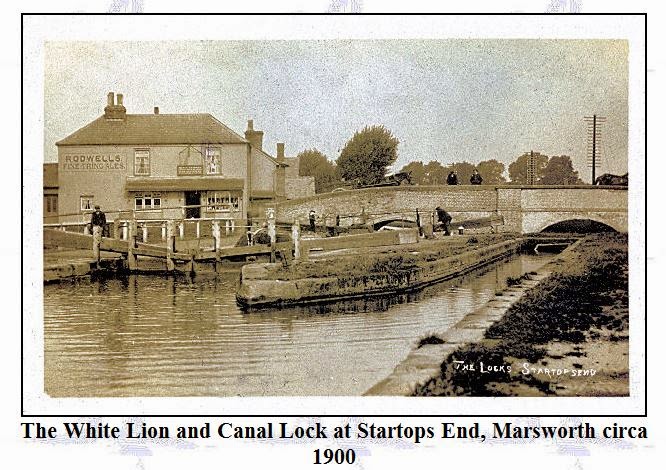 alongside the original double one to save water and speed traffic along.

All the way down to the bottom lock, pictured right, you will notice the extra space on the off side where the now in filled single locks were. The exception is the second lock down (44) that has a cottage very close to the double lock.

The explanation for this is the extra locks were built between 1835-39 and not used for long. In the picture on the right dated 1900 the single lock gates have been removed The cottage bears the date 1909 and looking at it I would guess the single lock is underneath the front garden.

Now a look at the problem with the lock. 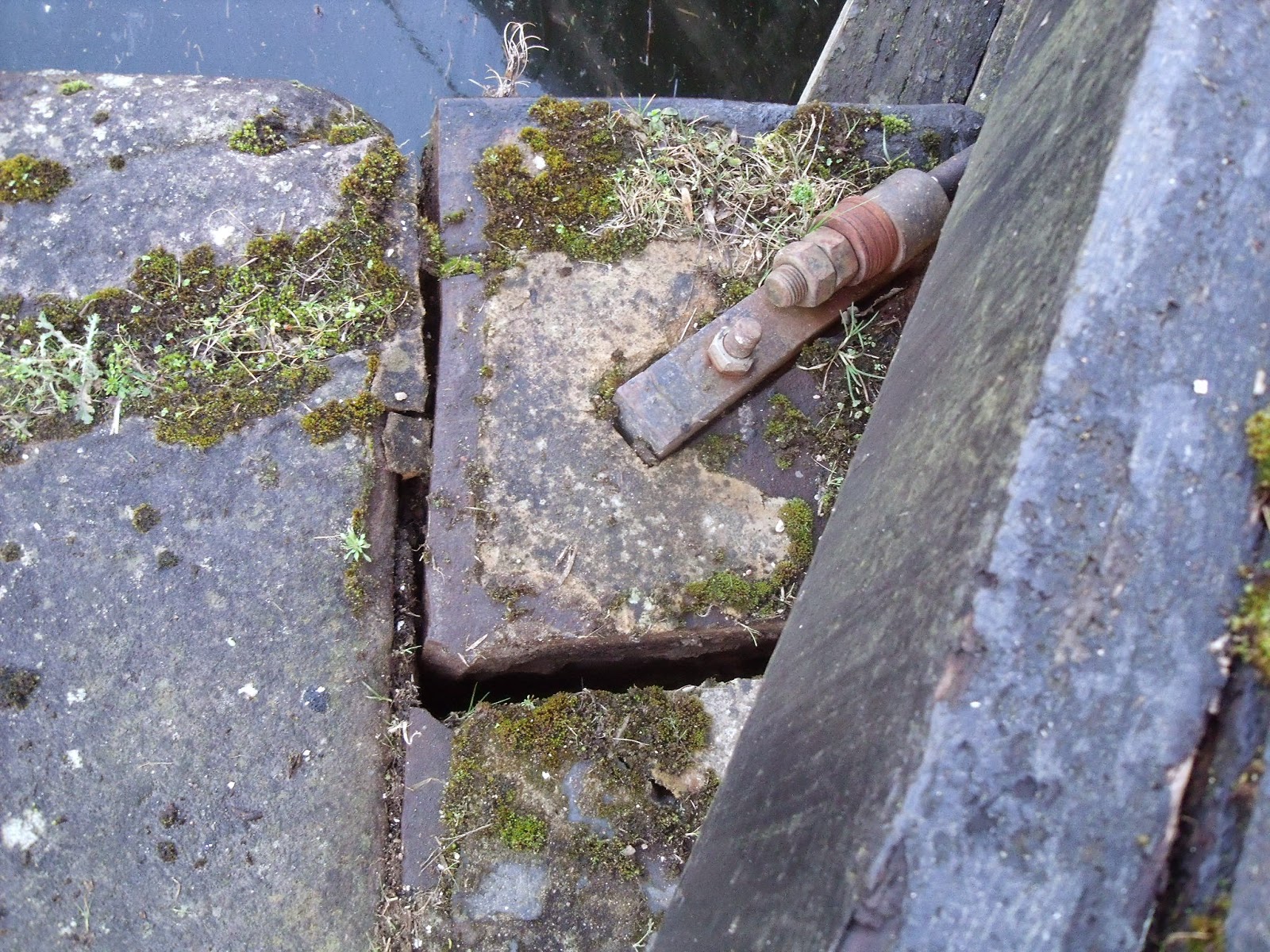 This is the problem that has caused the stoppage. The support for the gate is concreted into what is called the Quoin pier. As you can see the Quoin has failed and broken away from the main section. 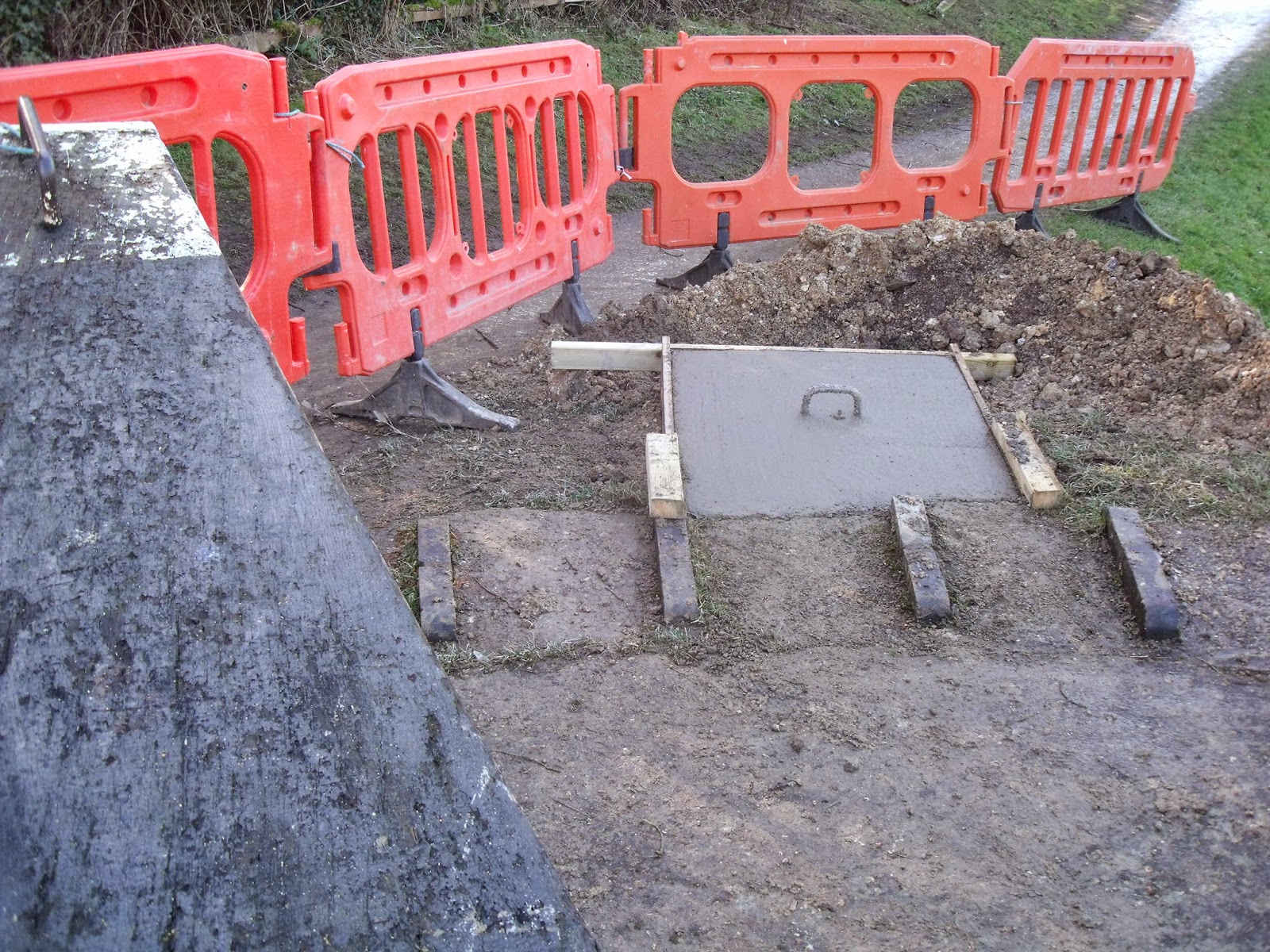 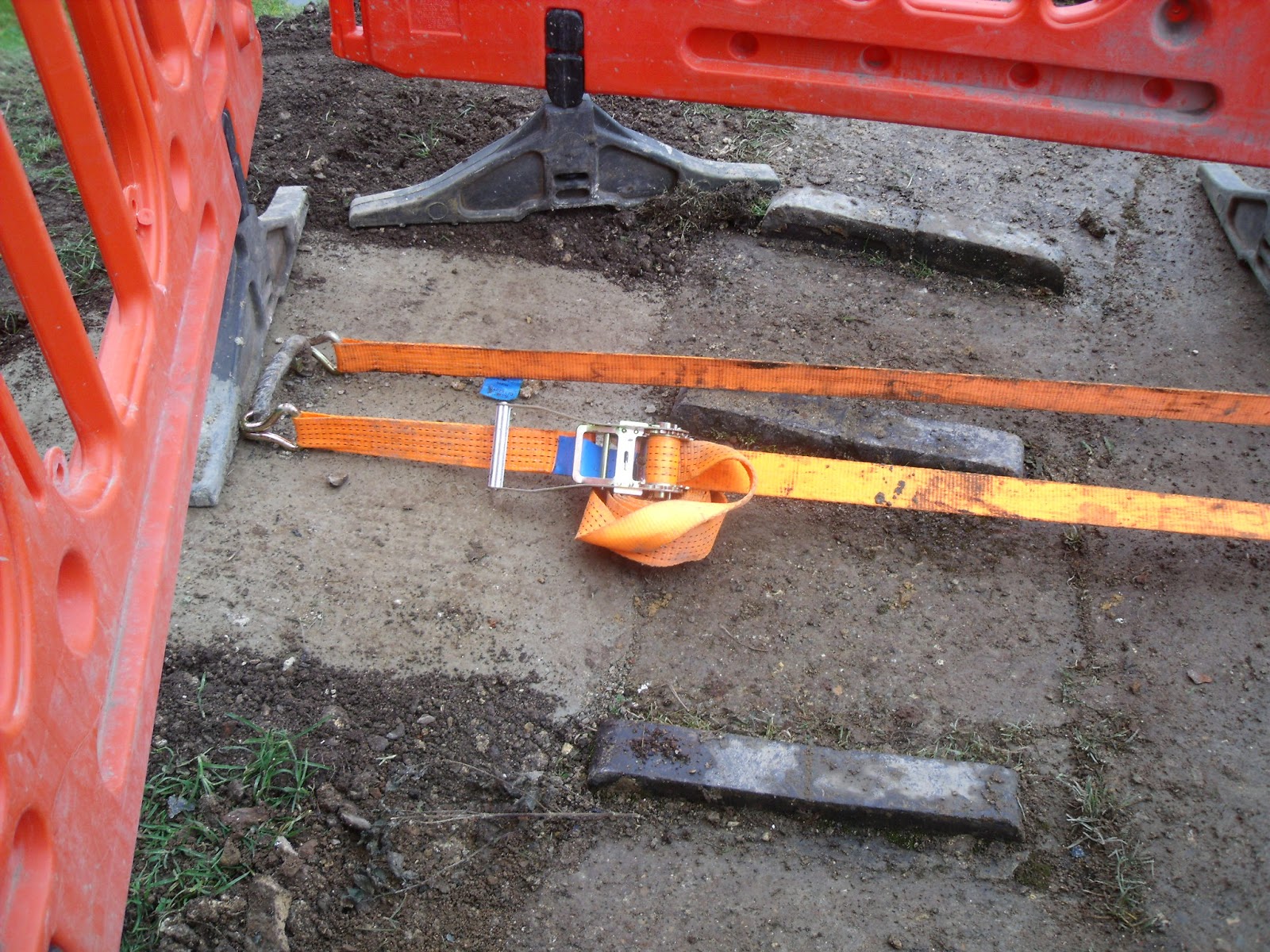 Two anchor bars were set in concrete each side of the lock beam. Straps were attached around the heel post, sometimes called the quoin post, of the lock gate and hooked to the concrete ground anchors. 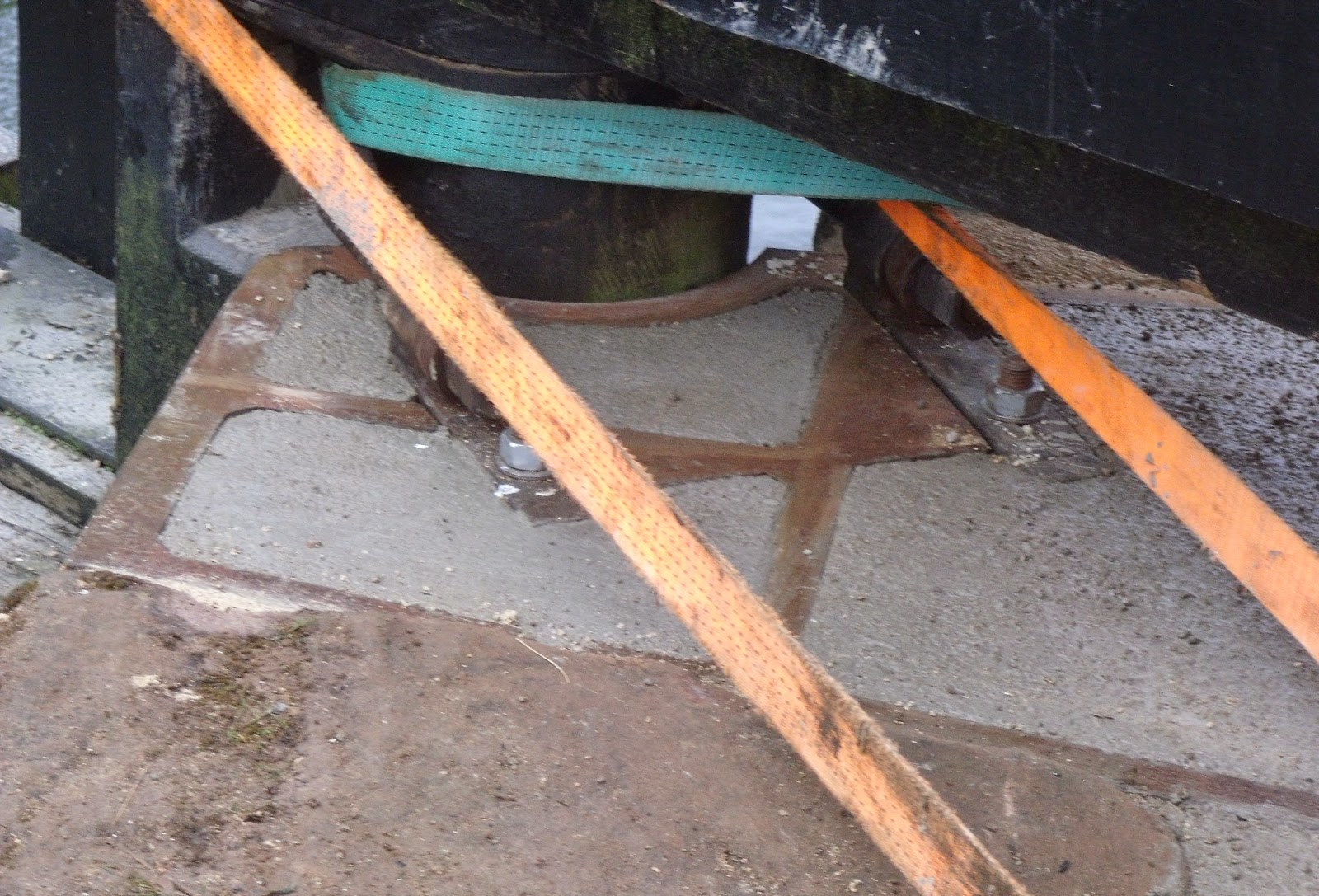 The metal gate collar wraps around the heel post that the Blue strap is supporting. The strap is held in place by two adjustable locking nuts. You can see now just how big the metal Quoin frame is, compared to the first picture, as it stretches off to the right of the picture. 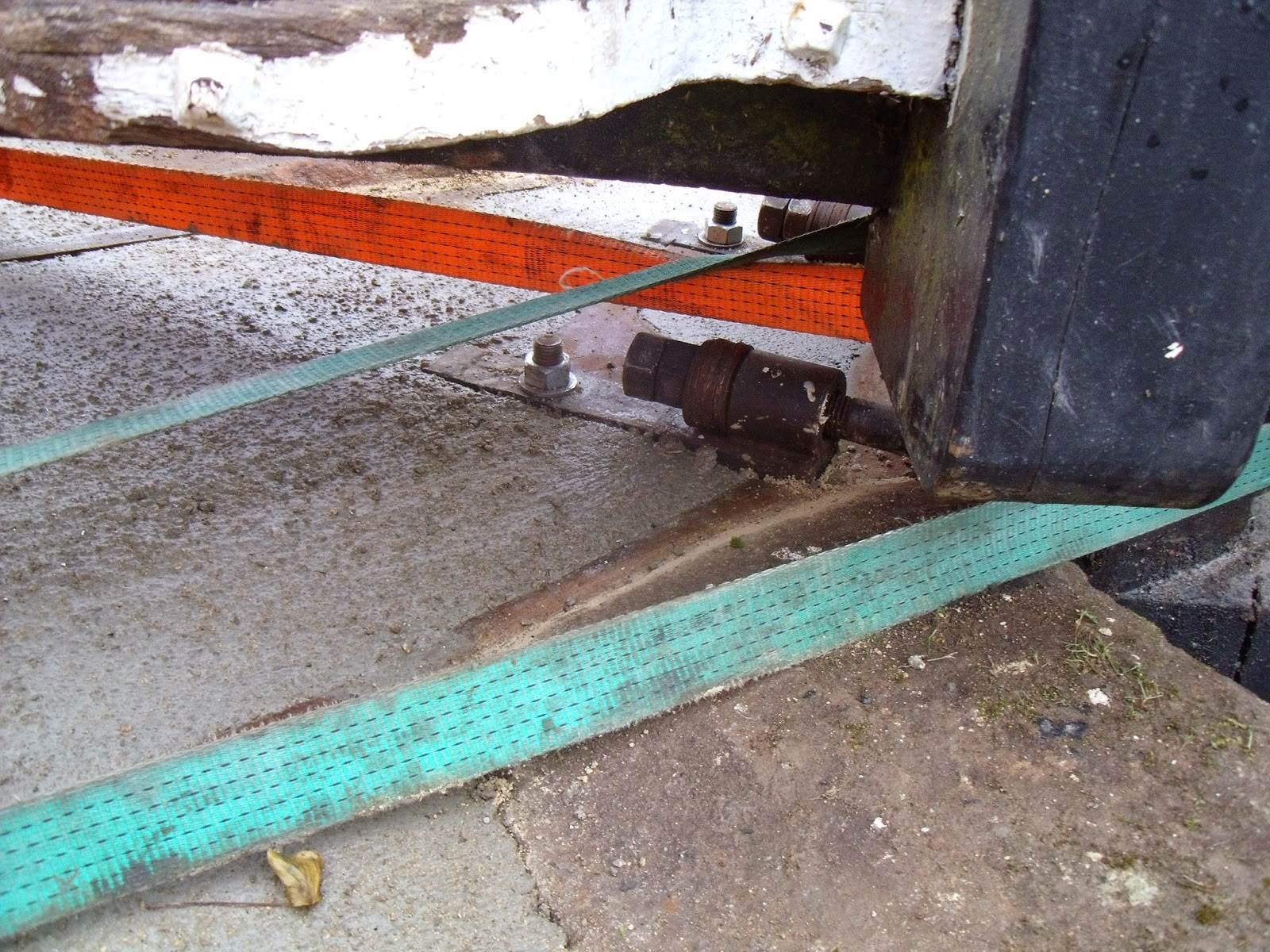 The anchor plate is set in concrete holding the gate collar firmly in place. These are adjustable to aid a watertight seal down the post.
On the right an old gate collar from the Ohio and Erie canal.

The lock is now open but wide beams need the assistance because of the strapped gate. To be quite honest the lock should have been closed to all traffic to allow the  concrete to set. There`s a lot of pressure on those gates when the lock fills and I just hope the neat job done by contractors is not weakened, time will tell. 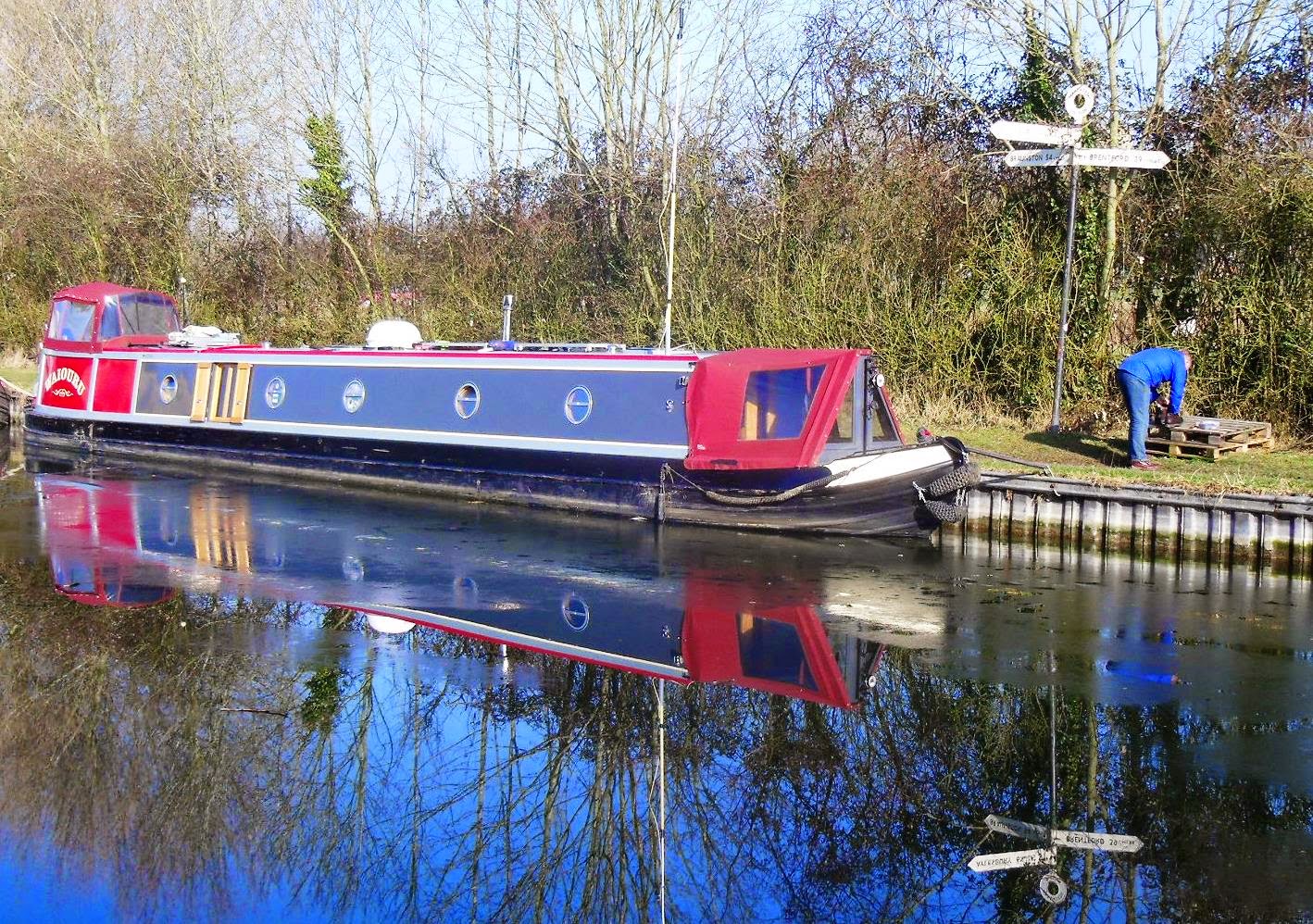 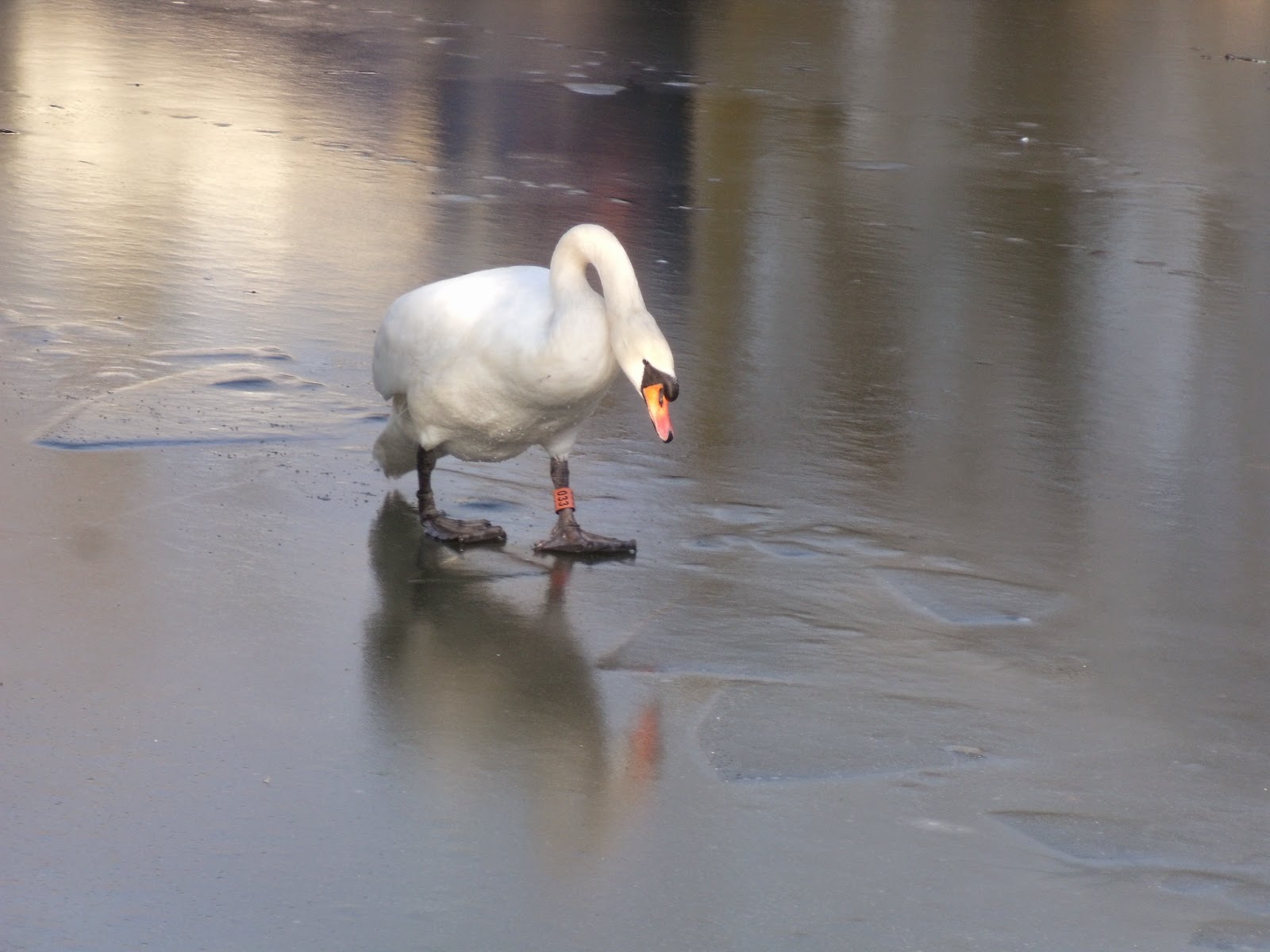 So time to walk down the Marsworth flight and find Tom and Jan on Nb Waiouru. They had intended to go down the Aylesbury arm but ice at the time delayed that and as time was short for their intended plans, Aylesbury remains on the `to do` list.

They did get through the stoppage and we had an evening together with George and Carol on Still Rocking.

We have now gone down through the Marsworth locks with the help of Carol and George and will spend a few days by the reservoirs before getting a Tesco delivery and heading out into the countryside.
Posted by Les Biggs at Monday, February 16, 2015

Looked at Tring Cutting and thought...Rideau Canal in Ottawa Ontario Canada,
Frozen solid to a depth of two feet or more; one big long skating rink. Which happens every winter and continues even now
with minus 35C and colder day time temperatures in places.

Convert NB Valerie to an iceboat on skates?

And Still Rockin' is of what width compared to NB Valerie; it appears to be enormous by comparison.

Hello Bryce
Still Rockin is 62feet X 11feet 6 inches.
12`6" is about the maximum in this area although wider is possible closer to London.
What would you propose for propulsion if we put nb Valerie on skates? Perhaps a jet engine.LOL
Les

For propulsion on the ice , a large sail, with a spinnaker at the front. Given the slow speed on the canal, that should just about do it...

And speaking of, it was minus 35 C here yesterday, all of the schools were closed as it was deemed too cold to allow the little children outside....wimps.

HI Bryce,
LOL!! In Alaska the cut off is -21F. at -22F children must have indoor recess. I remember gong out to play in the frigid weather--ice skating, sledding and making snow forts--bundled up to our eyebrows in layers of warm clothing and three pairs of mittens!
JaqXX