It's a Bird, It's a Plane--No, it's a Balloon and there is an American on Board!!

“I know that you believe you understand what you think I said, but I'm not sure you realize that what you heard is not what I meant.” ~ Robert McCloskey

Last Saturday dawned clear and bright--the sun was out although the long term forecast indicated Britain would catch the tale end of hurricane weather--high winds and lashing rain to come. We made the most of the sunshine and cruised for a bit, filled up with water, dumped the rubbish, ran a load of laundry and finally moored up in a lovely, quiet spot.

As we moored up I realised NB Bobcat was moored behind us! Finally after a year of passing each other with a wave and a smile on the cut, we had a chance to share a cup of tea, a piece of cake, and a good natter. Kath is a lovely woman. Short, shiny hair frames her fine face with sparkling eyes and a gorgeous smile. Kath's laugh is throaty and warm; she has many stories to tell of her life aboard NB Bobcat, and we enjoyed our chinwag.

Settling in, we thrilled to two swans sharing a bit of towpath with a pair of ducks. A Heron flashed across the canal, wings spread wide, and a Kingfisher darted and weaved amongst the bushes near the water. Our spot on the canal appeared to be idyllic.

As I began to consider what to fix for tea, a shout came from Les, who was outside setting up the satellite dish.

"Balloons Jaq, come look--quickly, hot air balloons!" I looked out the hatch of NB Valerie and sure enough a large, multicolored hot air balloon was rising slowly above the meadow on the towpath side of our boat. Les dashed inside for his binoculars and I grabbed for my camera. He stood out on the towpath down by the hatch doors and I took up a position standing on the bow locker, arms propped on the boat roof, snapping pics.

Ever so slowly the balloon rose with a large basket attached, holding a fair sized group of folks. Les had his binocs glued to his eye sockets, repeating rapturously, "Wow! Oh Wow lookatthat!!!!" Suddenly another balloon rose on the far horizon of the meadow and began a slow ascent. As I snapped pictures Les danced around the towpath in rhapsody, switching his view from one balloon to the other. As the first balloon was almost directly overhead it fired up to gain height and I said "I wonder if the first balloon will follow this one."

With his binoculars glued firmly to his face, Les said with utter amazement in his voice: "Jaq did you hear that? That balloon overhead is so close I can hear them talking. There must be an American on board, I'm sure I heard a voice say, 'I wonder if the first balloon will follow this one,'" affecting a flat, nasally American mid-western accent.

Stunned, I looked down at my husband as he danced around the towpath in paroxysms of delight and wonder. "Les...Les...Les??? Honey that was me you just heard. I said I wonder if the first balloon will follow this one--and I did not say it like that" as I mimicked the flat, nasally mid-western tonality he gave his American balloonist. 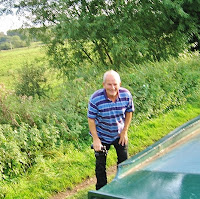 Les looked at me for a moment incredulously and we both burst into hysterical laughter, folded over, holding our sides. For an hour after both balloons disappeared across the cut I would mimic him and we would start laughing afresh.

Hi you 2, 'tis Bert the ex Gnome here, blogger locked me out so I had to kill it. Update - house sold, waiting on completion details, then I'll be boat buying. The Missus moved out and stays at the cottage annexe at the old Wigrams tollhouse.
Once I've got the boat I'll be starting a new blog.
Take Care

Hi Ross!!
It's great to hear from you. :) Wow--house sold, boat in build. We can't wait to start following your new blog and of course, catching up with you and your wife on the cut. Dinner on board NBV!!
Blessed Be,
JaqXX