I Give You--Our finished Remodeling!!

When a work lifts your spirits and inspires bold and noble thoughts in you, do not look for any other standard to judge by: the work is good, the product of a master craftsman. ~Jean de la Bruyere 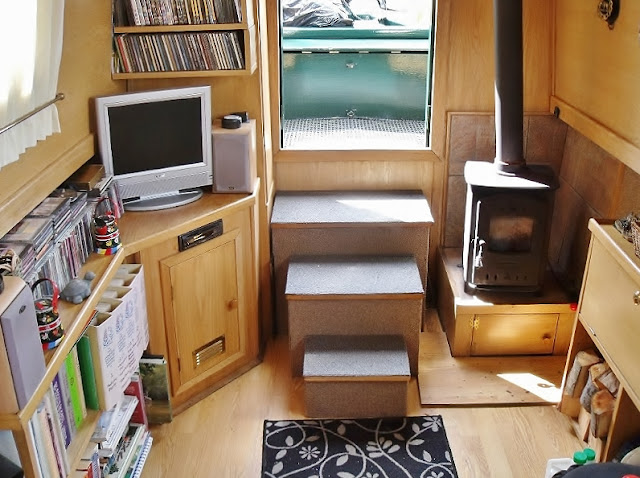 The small corner cabinet previously housing the DVD player and Skybox--and upon which the telly sat, took up a lot of room and provided hardly any storage. One had to get on hands and knees and literally stick one's head in the cupboard to find anything.
The stairs were hard on my knees coming in and going out; dirt always got caught up in the seams on either side and in the corners in front of each stair.
The old hearth was tiled in dark brown which overall made the corner look like the black hole of Calcutta. The corner was always dirty with ash we couldn't get up from the lip at the edge and we couldn't reach under the stove. 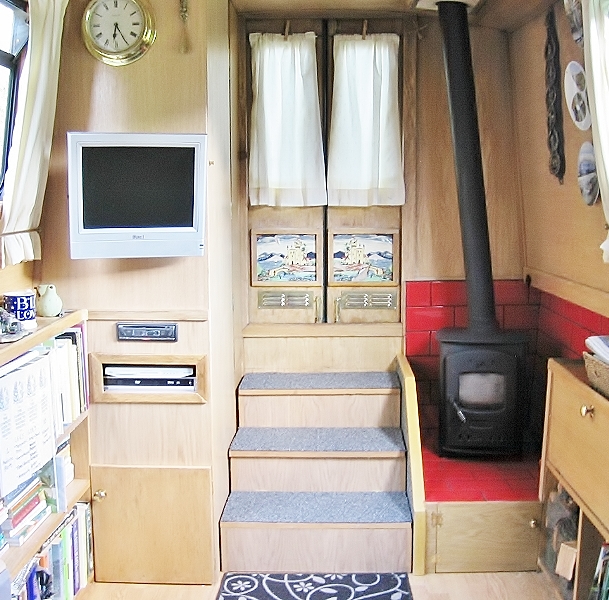 Now the hearth is cheery and bright. It glows with light reflected from the tiles; there is plenty of room to sweep under the stove, and we can catch any live coals tumbling from the open stove door without anything hot landing on the floor.
There is a uniformity of cupboard/stairs/hearth that didn't exist previously. We gained a ton of storage space, and the saloon is much easier to sweep, mop, and keep tidy.
Our finished project is a combination of me and Les--our personalities, our joint needs and desires for comfort, storage, utility, and beauty. Thank you my love, for making our floating home such a lovely and loving place to live.
Posted by Les Biggs at Saturday, September 15, 2012

Superb!! It looks so comfy and cheerful, I am sure it is so easy to walk right in and feel cozy and at home. Have lots of fun with your new saloon and congrats on some excellent work! XXXX, Silvia

Les & Jac, remodelling looks lovely and practical, enjoy all the extra space.Now sit back and relax. Thanks for tip on Pennytalk, we have been using it. Hope our paths cross soon. Jacquie & Stein.

Hi Sylvia,
It is as you say--comfy and cheerful. Lovely to hear from you. Hope all is well with you and yours,
Jaqueline

Hello you two! We are glad to hear Pennytalk is working for you. I love your Blogger photo! That is one warm hat you are wearing Jacquie! We look forward to seeing you both again soon.
Jaq and Les

Well done Les... looks great thanks to Jaq's eye for colour and your DIY skills. DIY is so satisfying when a project turns out so well.
Enjoy.

Hi Jon
I try my best with limited equipment. Would be nice to have a decent workbench for one..
Les

Hi Les,
B & Q do reasonably good folding benches in the style of the Black and Decker workmate for about £18.00.

Now then that looks absolutely fabulous. Well done you both. We can't wait to meet up with you both, we seem to be just about the only boaters who have not done so yet!

We are going to have one helava party! xx

Hi Sue
We will eventualy cross paths and we both look forward to it. As for you being the last to meet Jaq, we are saving the best till last.
LesXX

That hat was when we were in the Norwegian mountains, we went up for a drive & picnic, it was minus 10 about, hence the hat, warm rug, hot choc and brandy. Take care xx

Kudos, Les. And brilliantly devised, both of you! How satisfying remodeling can be--to see one's vision made real and to appreciate how good that vision was.

Hi Les & Jaq,
I recalled seeing these pics of your solid fuel stove update and now that we're soon to install one ourselves I've come back to see how you did yours. What type of stove do you have??
Cheers,
Elly & Mick
nb Parisien Star
ellyandmick.blogspot.com)

Hi Elly/Mick
The stove is a Valor willow, small but we find it heats the boat ok. I only had to remove the stove to re-tile but I think you are installing for the 1st time. As i had to do behind the extended tiles you must use fire board(6mm Masterboard) behind the tiles as they get real hot also use it below the stove. The chimney is bedded into the stove with fire cement and the top as it enters the roof collar use plumb-flu a heat resistant silicone both from screwfix. Also the chimney pipe going through the interior roof must pass through a fire proof board and mine has fire rope wound around the pipe between the ceiling and outside steel roof.
Tiles are stuck to fireboard with evo stick instant grab adhesive tube in gun job. Give board a good coat of PVA to seal the surface before tiling. The tiles are fixed by a blob of adhesive in each corner + centre or more if using large tiles. For the bed the stove sits on i used a bed of normal tile adhesive all over the surface so the tiles lay flat to take the stove weight and incase you drop a log and crack a tile.
I did a lot of research on canalworld forum on the net. Lots of ideas but i went with the majority.
Not easy to cover it all here but by all means e mail if we can help.
lesbiggs1948 AT hotmail.co.uk
Not sure of your cruising plans but we are back uk Napton 28th then onto the Ashby for 1st half December(blacking)then towards London so maybe might meet up.
Les