Hope everyone enjoyed Christmas, Jaq and I spent our first Christmas on board nb Valerie at Cow Roast on the summit pound. We had reached this point late on Christmas eve and took the first mooring available as we were due to be picked up for a family meal at a French restaurant. Waking up on the 25th we decided to cruise for 30 mins to get away from the muddy towpath and the endless line of boats both sides. So another first, Christmas day cruising. Out of sight and sound of others I spent a couple of hours cutting and splitting the wood we had collected over the past few days.
After a couple of days it was on to Marsworth for another family get together and meal at a pub in Cheddington. This stretch of water from Cassio northwards is very close to family so it`s nice to see them all before we go off heading to Wales.


Ok so as regular readers know the blog is never very current and although we are now out in rural Buckinghamshire ( Ross are we near to you?) I am blogging some weeks back.
The journey out from Little Venice to Cowley lock is 27 miles and one of the longest lock free stretches in the country.
The Paddington Arm and the mainline were once a large collection of docks and wharves (click on map to enlarge). If you look carefully the long filled in ones can be located and even the bridges although no longer in place can be placed by deviations in the towpath surface some obvious if looking closely. 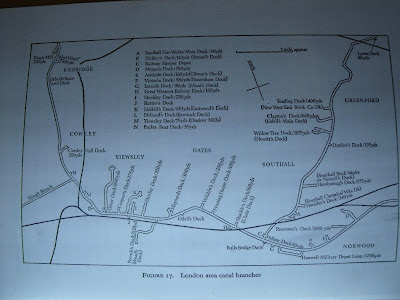 A lot of the arms were for loading at brick works, chemical plants, railway yards to name just a few but the one I like best is Shackles Dock pictured below. Although in the early days bricks were shipped 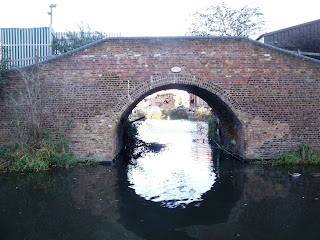 from here it then became the site of the Aeolian company that made Pianos. In the picture below from the early 1900`s I have marked a Red X(click it to enlarge) next to the bridge pictured above. The Red line is the arm into the factory site and just above the Red X is the arm that went into the GWR Great Western Railway sidings. Strange to think that had we passed that now renovated bridge the view would have been a lot more spectacular than a few old shabby buildings. 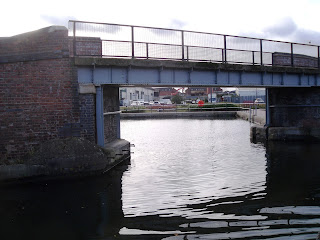 The J. Lyons dock still remains although the site has been re-developed with many faceless warehouses replacing the original landscaped J Lyons site. I remember this area so well through working and growing up in Paddington with surrounding areas like Greenford just a bike ride away along the towpath. If you click the link above you can compare the maps of the original site with the google one i have marked below. In the link maps the canal runs past the tall chimneys below the canal is red lines, the basin is red x and the Yellow marks the size of the old  J Lyons site. 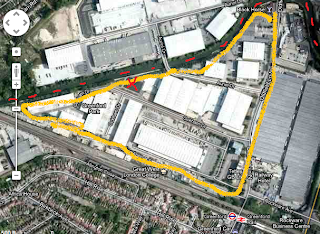 Google earth is fantastic, if you look closely you can see nb Valerie passing by.......honest......would i lie.

Have a Happy New Year everyone. Jaq and I are seeing in the New Year with some fellow bloggers so whatever way you step into 2012 do it safely.
Posted by Les Biggs at Saturday, December 31, 2011

Hi
We be in Northamptonshire,heading
to Stoke Bruerne tomorrow for the morris dancing,my usual walking haunts are between there and Braunston.
Have A GREAT New Year and may you
have only good roads on your journey!

Hi Both, Happy 2012 to you .... maybe we'll see you in Wales then - that's where the convoy will be heading after the weekend! xx

Ross
Very close so look out for us or as i said before e mail.

Carol
A lot of miles and a few stoppages. Jaq has been having fun checking the route on canal-plan. No rush we will arrive eventualy.