No more waiting at Marsworth

These are the last of Jaq`s boxes that daughter in law Joanne has just arrived with. The situation as i type is only 1 box remains un-opened with all the others having had a home found for their contents. 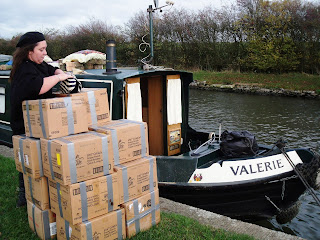 So now we can once again get under way and the decision has been made to go into London. It seems to be the right decision as we have just learnt friends are flying in from Paris and wish to stay a few days before flying back to the States. So we will all share what is the cheapest hotel/restaurant in London and i will act as the  guide for 2 American tourists plus my darling wife.


Are Swans vegetarian? I ask because for the last few days a pair of Swans have  been playing tug of war with a plastic bag. Trying to get a clear picture is difficult, as they stop the game thinking i`m 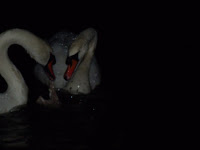 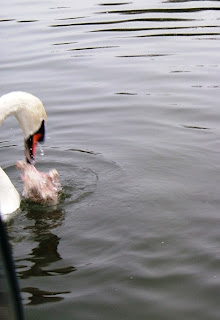 going to feed them.I have just this minute taken a night shot.  Anyway the mystery of the bags contents are now clear, chicken innards, as the bag has almost come apart. In true C.S.I. fashion this was  confirmed when one Swan brought up from the murky depths a chicken carcass and the pair of them took turns pecking and holding what was
left of the meat on an almost bare carcass.
It seems after a Google search that Swans are in fact omnivorous and will make a meal of land and water based insects and the odd small fish but are mainly veggi.


Tina asked for a pic of the cross bed but i forgot....sorry Angel. The two pieces just slide out from 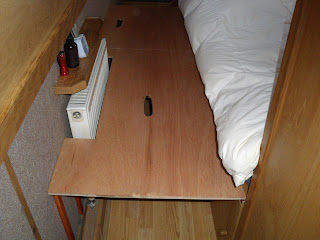 under the mattress and rest into a lip on the bed and drop into an `L` shaped piece of wood below the gunnell. It is Tina the same as the dinette table fixing on nb Valerie the design of which as you know I copied from your boat. The bed is complete with a 6`x2` inlay that sits on the bed during the day but at night becomes a 6`x6` bed.

Just been reading through the Dec. issue of Waterways World and two things caught my eye. First in early 2012 Mercia marina are offering a holiday of 4 days in an on site lodge then 4 days on a boat for around £1,035. This is an April price and i think they might have been nervous to quote a summer school Holiday price. Still it might suit the people you see on the front of hire boats, usually ladies, that look totally bored while the men are on the tiller beers in hand.

Next thing catching my eye was an article(click here) on Standard narrow boats new 50` Cygnet, just another new boat report but it has a sales gimmick offering a years free insurance and 100 litres of  fuel plus other bits and bobs some of which i would expect with a new build. 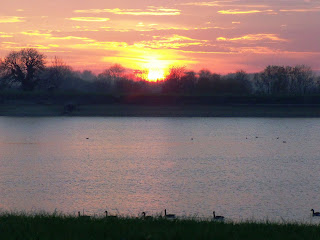 Let me know when you are in London, if you have the time I will meet up with you for a coffee and maybe a bit of naughty cake.

How dare you admit you 'forgot'me uncle Les!!!!
Bed looks great - would love to see where you put the contents of all those boxes - have you bought a butty??

Carol
Looking to be in Paddington first week in Dec. so yes we must sort out something.

Tina
Amazing where it all went. Have off loaded some ballast from beneath bed to counteract the slight list now need to get some weight off the bow.
Jaq says we now have a new USA card game.
Jaq/Cards!!!!! saying nothing.
See you both early next year.
X