Along the Ashby canal places to re-stock the galley are limited with Hinckley being the only town in close proximity to the canal. Other places are Stoke Golding with just one shop and a post office(our post will be here on our way back) or Market Bosworth. Both have a bus service back to Hinckley if the small Co-op food supermarket doesn`t quite hit the spot for you.

So here or rather there we were at Stoke Golding and yours truly puts his back out probably stretching to much when sawing wood for the shelves. So after a few days Jaq decides having looked up the bus times to go into Hinckley and get some things the village store didn`t stock. Not sure of the exact bus stop Jaq asked a lady in a car outside the post office and was standing at the said bus stop when the same car pulled up and Jaq was invited to join Liz the post mistress together with friends for a trip to Morrisons on the outskirts of Hinckley.

So the back is better and we see a notice advertising Crown hill field open day in aid of the `Get Thomas to America fund`. Crown hill is where Henry VII was crowned after Richard III was killed in the Battle of Bosworth. Historians were on hand to not only discuss the battle history but to explain the recent archaeological finds that have proved the battle did in fact take place 3k from what  has been the suggested site at Ambion Hill. The weather was not kind but a modest turnout raised £600. 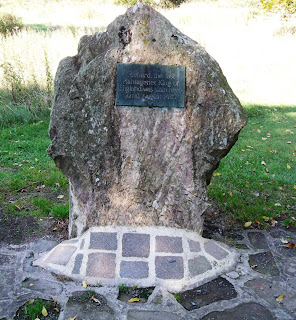 The Battlefield moorings at Shenton have been popular for visitors to the battlefield site and at the bottom of the embankment is a small field and a monument declaring it the site Richard III was slain in battle. What will happen now in light of recent findings i know not but for sure the Heritage centre will remain as it tells the story so well with a newly opened extension containing recent finds from the new battlefield site.

I suppose for now the visitors will still arrive by car or boat and the heritage centre will continue to alter the information boards. The walk from the moorings via Shenton  station was excellent and Jaq & I rewarded ourselves with a full English breakfast in the restaurant that was walked off by the time we arrived back on the boat.

I just shudder now when I think of those 3 months in the U S totally dependent on a car. The weight i gained is coming off slowly as i can now button up a pair jeans that previously remained open. 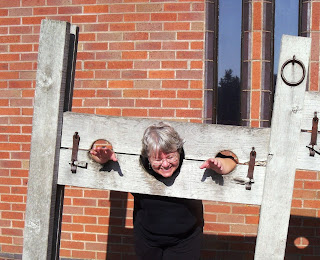 A couple of pics for Jaq`s girls back home. Above mum in the stocks at the Heritage centre and below she tries on the soldiers battle wear as we tour the exhibition. 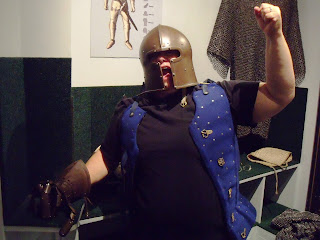 great to hear from you - was beginning to think you'd both 'gone to earth'!

I bet Mom's in HEAVEN she so loves history :). Thanks for posting the pics...I try to check back periodically to see pics of Mom. Love to you both!

Hahahaha Jaq looks hilarious in the outfit, glad you are both back in blighty. Carol (Blog Virgin)

Still the honeymoon period, that lasts at least a year doesn`t it?

Hi Jessica
Your mum is the happiest American that ever moved to UK and I intend it to stay that way.

Hi Carol(blog virg)
We did have a giggle trying on the clothing.