When Maffi told of the towpath hedge being attacked by the farmer little did i realise how bad it was. Maffi did mention BW were in talks with him (farmer not Maffi) but it seems that he`s not listening as the mess was still there on the 25th. I would imagine the towpath as covered completely and that walkers have pushed it away from the cut to pass through. 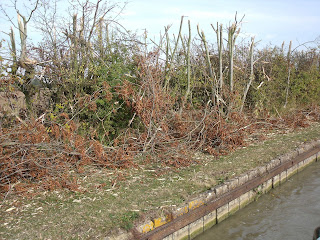 So my regular visit with Andy & Tina before heading south was the reason for choosing this route and now having enjoyed a lovely evening aboard nb Valerie it was time to turn around and head back into Braunston. The plan was to stay the night but we decided to do the flight and lunch before the tunnel then a night stop at the top of the Buckby flight. 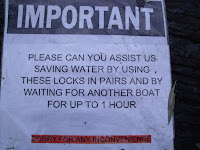 So we arrive at the bottom lock as 2 holiday boats start up. Another holiday boat comes behind us so we can comply with the notice(left) posted on the lock beam by BW. So all is well as we rise in the bottom lock until a private boat moored in the first pound turns and enters the second lock leaving one of the 2 boats in front of us left in the pound.
Simple decision for us was to let the holiday boat who came up with 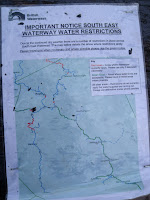 us carry on and we stayed in the pound and put the kettle on, after all we have a lifetime they had just a week.

According to the second notice on the lock beam advising water    restrictions in the South east we are using the Gd. Union that BW has decided the water to be at an acceptable level, time will tell.
So we arrived at the Buckby top lock and after taking on water and off loading rubbish we decided to just keep going. Having been on the water point for an hour an not seen any boats arrive we had no choice but to go down the flight on our own. Just a short distance from the bottom lock is Brockhall which earlier this year was the scene of much tree cutting and it was nice to find some wood  still available. I imagine this is what was unsuitable for the saw mill but the stove on board is not fussy so a few lengths were loaded on the roof and cut up the following morning on our remote mooring.

As i sit here typing fellow bloggers Derek & Carrie on nb Uccello have
just pulled up in front of us. 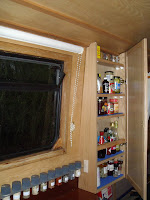 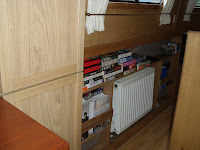 The pic on the left is the book shelves i mentioned were next on the list after the double cupboard in the galley. On the right another Billy bookcase has appeared as an above worktop cupboard and as can be seen Jaq finally decided where the spice racks were to be located. Pull out shelving in one of the low level cupboards is the next project.
In case anybody is wondering about the title of this post the name of a post is sometimes hard to decide as just putting Braunston, Rugby or wherever we might be is boring i think. So wood came to  mind. Trees on the towpath, 2 flights of wooden gates, some firewood and some new wood cupboards.
Yes i know .....to much time on my hands.
﻿
Posted by Les Biggs at Thursday, October 27, 2011

Hi Les,
Love your title - it's very apt! Glad to hear all is going well with the wood-gathering and wood- working!
Sue / Boatwif from nb Cleddau

Cupboards and shelves are looking good, well done. I'm sure your handiwork is much appreciated.

Hi to you both. It looks like we missed you by a day as we turned out of Norton Junction. We are moored above Braunston Locks until Monday. Happy cruising and one day we will see you both. Jo xx

Hi Sue
Getting closer to you. Hoping we can meet again.

Hi Ian/Karen
Yes my bachelor pad is changing daily.
I think we last met at weedon and without checking it might have been earlier this year.
Enjoy.

Hi Jo
So like life afloat not see someone for ages then miss them at a junction by sometimes hours.
Safe cruising see you soon.