EVEN A LONG WEEKEND HAS TO END SOMETIME

Well the time had come to move on after a lovely w`end. Well yes i know it`s Wednesday but a boater`s w`end can be that long, sorry you working folks. Chas and Anne had moved off i think on Tuesday and when i awoke Del & Al  had arrived on Dewent6 and had stopped by just to say hello, thanks guys. 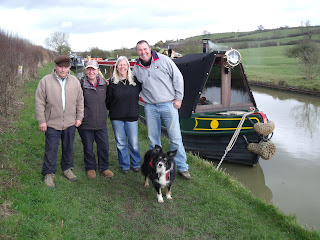 So time for goodbyes as Sue & Vic move off followed by Del & Al with me off in the opposite direction towards Rugby for some plumbing parts for my re-location of the washing machine. Jaq you will have space for your clothes i promise.


The new marina at Barby looks much the same as the last time i passed. Just a big hole, no pontoons and more 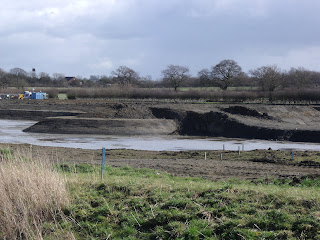 worrying for the intending moorers, no sign of any work force. The site says opening Spring 2011 somehow i think this might be a bit optimistic.


I had just approached the last of the 3 locks at Hillmorton when a boat approached. There are 2 single locks side by side here and as i was dropping in one the other boat was heading for the adjacent lock. 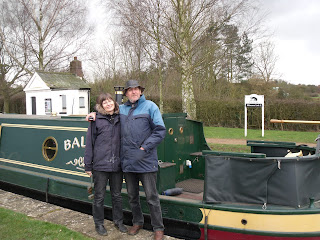 As the boat got closer i realised it was Mo & Ness on Balmaha so congratulations on my engagement to Jaq  were their first words and after a long chat with us both using a lock each, good job the season isn`t in full swing, we both carried on our journey`s.
So 4 fellow bloggers have crossed my path in as many days, hold on make that 5 as Paul & Lyn on Piston Broke stopped by briefly to help Sue & Vic with a minor wiring problem but were gone before i realised.
Posted by Les Biggs at Wednesday, March 09, 2011

So looking forward to the time that you and Jaq can be together with all of your friends. It will be so much fun.

Ohhh how I wish I were there. May cannot come soon enough. shall I bring the duvet perhaps the secateurs?
I Love you!

Hi ngillard
It won`t be long and there are a lot of folk wishing to meet Jaq.

Jaq, i`m still laughing about that.

Hi Sue
It`s all about an evening of word pronunciatian American style against Brit style.
I can`t even think how to describe how they pronounce these 2 words along with hundreds of others.

Sue,
We Yanks find a British accent quite er..appealing. Someone with a British accent can recite the contents of their trash bin and make it all sound sexy. It's the way he pronounces duvet and secateurs... ;)

Ok Les
I will try again, don't know what the problem is, but my google keeps getting cranky.

Nice plumbing and I am glad you are making Jaq more wardrobe space, and I hope she has a lovely time filling it. LOL