My route is on the Gd. Union that started life as the Gd. Jct. Canal following the granting of an act of Parliament in 1793. The Oxford canal company`s route to London via the Thames was long and the Gd. Jct. was to be a much shorter and therefore more competitive.
Braunston Tunnel opened in 1796 was originally planned at 1,600yds long but ended up at 2000+ to reduce the long cuttings at each end. At the same time the canal opened to Weedon.

My first overnight stop is Norton Jct. at the top of the Buckby flight of  7 locks, take heart fellow boaters that if the original plans had stood this flight would have been 10 locks.
Down the Buckby flight and just a short distance brings me to the scene of much tree felling. The trees are on the 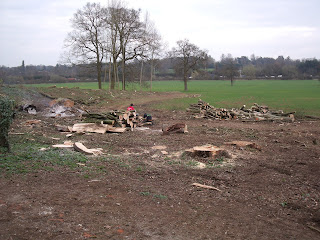 Brockhall estate and are being commercially harvested and the site will be replanted soon after. Now the two men on site were not going to let me take any large pieces but were quite happy for me to remove small cuttings and my top box was soon full of a lot of good oak logs. Making them Coffee seemed to speed negotiations to the benefit of all.
I decided to stop the night at Weedon but so far this has stretched into 2 nights because of the lovely sunshine and the need to touch up the paintwork below the Gunnel's. 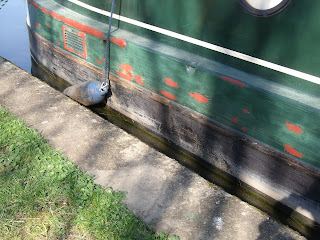 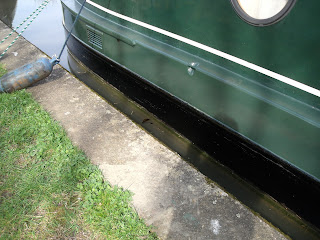 The mooring next to the church has it`s good and bad points, the bad being the close proximity of the railway and the bell practise in the church last night but the deciding factor was the very low concrete edging that made it 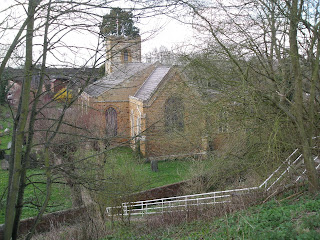 easier to do the paintwork. The temptation now is to wind the boat and do the other side but i`ll wait and see how the weather is tomorrow. Time is on my side as i`m meeting Jaq at Heathrow in May so have plenty of time to get down to the Watford area which will be easier by cab when i pick her up. Together we have made plans for our future and i will reveal these perhaps in the next blog. 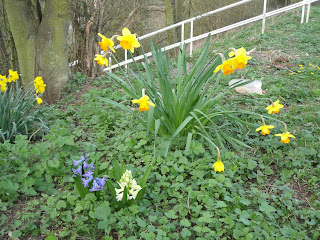 Signs of summer are all around.
Posted by Les Biggs at Thursday, March 24, 2011

Hi Les,
Remember you and Jaq have a standing invite to dine with us and The Lucky Ducks aboard Pippin!

Good job on the paintwork!

The touch up looks great! With her new ropes NB valerie should be ready for spring. I cannot wait to be there with you.You've been busy!

I walked to Pike Place Market and back to my hotel this morning at 5:30 am--missed you so Les, and wished you were here with me to watch Seattle wake up. On to Tacoma tomorrow, and home Sunday. Taking pictures with the camera and really enjoying meeting students. I love you!

Go on down to the junction at Bulls Bridge, you could walk to Heathrow from there !!

Bloomin'hell Les, you do like keeping us in suspense!!! Just tell everyone if they need to buy a hat or not please?!! I hope you have got those wardrobes started....

John & Jackie
The invitation is noted and we intend to take you up on your kind offer.

Alf
That is a good idea, could use the moorings by Tesco.

Carol
be patient, all is about to be revealed.

Bev
A secret is safe with you eh!
Keeping it in the family for now.

I am yawning at Marsworth for a while, are you going to disturb me? ;)

Sue
Not sure at the moment as i`m still doing bits on the boat and might pop home to see the kids for a couple of days.