My flight was to be 6.30 am from H`row Terminal 4 and knowing the extra time required for security checks i`d booked a cab for 3.30 am. This would give me 2 1/2hrs to check in, have breakfast and chill out watching the world walk by. Sounds like a plan but all good plans can go wrong.
The cab arrived bang on time which was more or less a certainty because my daughter in law Bev had booked it with her cab company owning friend & neighbour and no cab driver would risk turning up opposite the boss`s house late.
Entering the terminal and upon locating the check in desks all i could see were hundreds of people not queuing but milling around the deserted desks. My usual method is to  check in at the computer terminals and hand in my suitcase at one of the usually quiet desks, normally a 10mins task. All this changed with the desks not opening till 5am and although i had checked in and had my boarding cards for the 3 plane trip i still had to join the hundreds of others to hand in my case. So now it`s 5.30am and just time for a coffee & Croissant and a quick call to Jaqueline before boarding.
The first stage of my journey is by KLM to Amsterdam and then a 10hr flight to Seattle followed by a local plane to Pullman in East Washington State.
The arrival in Amsterdam was without incident. With an hour to spare before boarding an Airbus A333 similar to the one pictured below i decided to use one of the airline computer terminals to change my allocated aisle seat to one 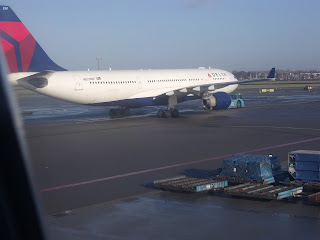 next to the window. Two minutes later i have my seat changed and am strolling around feeling well pleased at how easy it had been. On board the plane in my window seat still feeling smug, the pilot announces the plane will be pulled off the stand in 2 mins time. It then dawns on me the reason why my fantastic re-arranging of Delta`s seating plan had been easy. In the picture below, taken as the doors shut, you can see how empty this flight was. 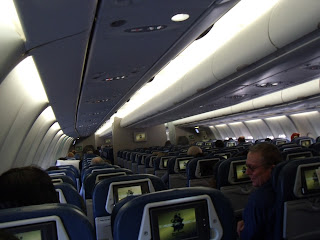 Altogether across the 3 class sections there were 130 empty seats. People ended up stretched out across rows of seats to sleep. I was quite happy with 2 seats to use for a doze. 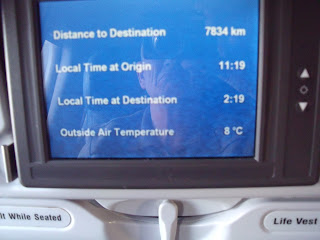 So just a matter of relaxing with a book, in flight movie, sleep or the flight information screen for the next 10hrs. My choice omitted the movie.
The route was back towards the UK across the top of Scotland over the
southern tip of Greenland, over Hudson Bay, across Canada and south into Seattle on the Pacific Northwest coast of the U.S.
Now i know they say everything is big stateside but my next 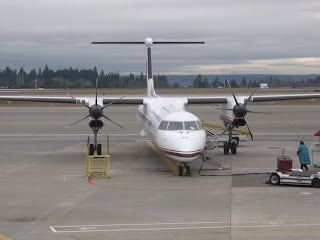 plane was a tad on the small size with no jet engines, i just hope the loo is inside! Just a 50min flight with 70 seat capacity this little bird would drop me just 4 miles from my love`s home.
Now you remember the first picture of Terminal 4, well below is the main only building of the Moscow Pullman Regional 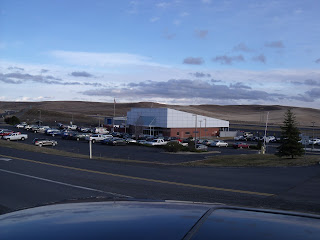 Airport. Now i`m not saying this is the norm but i was met by a female cab driver who not only greeted me with un-limited hugs and kisses but insisted i spend my stay in her home.
Jaqueline and i are having a wonderful time making plans etc. etc. etc.
Goodnight all.
Follow Jaqueline's blog here.