The Rickmansworth Arm, Salters Cut, Gasworks Arm call it what you want but it still remains a canalised section of the River Chess starting at Batchworth Lock.
As Samuel Salter made it navigable in 1805 to reach his brewery perhaps he should have the honour of it being called after him after all he was the first as the Gasworks didn`t arrive until 1845 followed by the Railway (LNWR) in 1862. Don`t confuse this railway with the present day one that arrived in 1887 courtesy of the Metropolitan Rail Company. The line that was a branch from Watford to Church St. Rickmansworth was intended to connect to Uxbridge but this fell by the wayside with the result that goods were transshipped to canal boats for the journey. 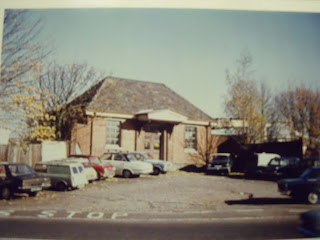 The LNWR station in Church St now demolished.
Before we carry on with the walking cruise of this very short arm just double click the map below 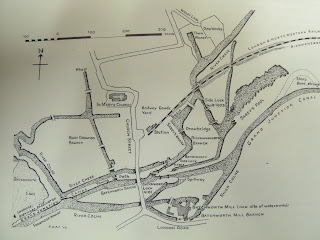 and you can see just after the railway crosses the arm and before the gasworks another arm went further into the town centre and although i can`t be sure (still searching) it`s probable the brewery was located along or near this arm, sadly it seems to have been filled in
Also note Sabey`s Wharf, they used the lock constructed in 1903 to bring out gravel extracted from the meadows that stretched across to the main line.
It starts below with the arm entered by the left hand lock under the footbridge while the main line north is to the right. The building on the left was once two pubs and stables, canal side was 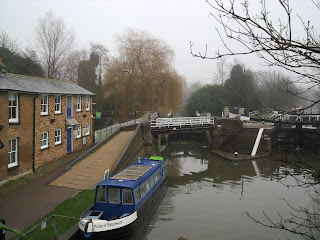 the Boat and in the same building but above on the roadside stood the Railway Tavern. 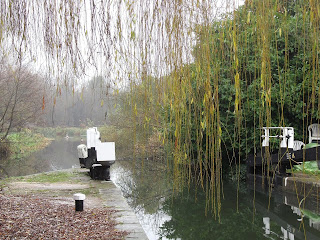 Use your imagination as taking the boat up here would i think have meant reversing out. So from the first and only lock just a short run to the first bend. 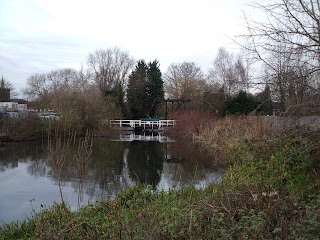 Around the bend and just the one lift bridge for access to a couple of houses. 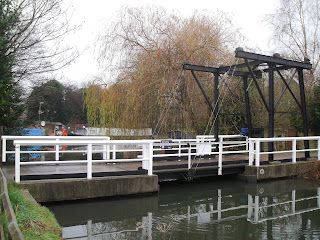 On through the lift bridge all along this left bank was Sabey`s wharf. The arm now goes right. 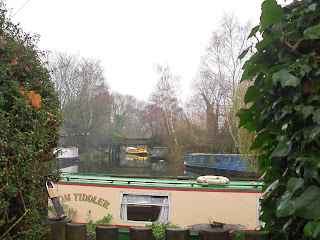 giving this view up through Chess Basin, up ahead a footbridge. 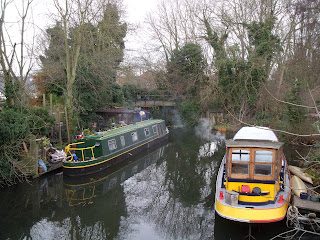 From the footbridge, the next bridge carried the railway into Rickmansworth 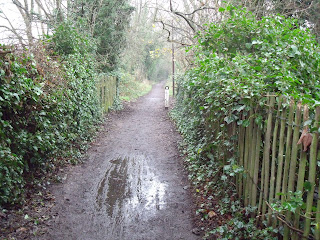 but is now a footpath(Ebury Trail) that crosses the canal mainline at Lot Mead lock. Makes a nice circular walk returning along the towpath at Lot Mead. 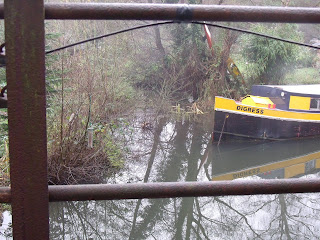 Looking back from the footbridge just by the bow of the boat was the lock that was used by Sabey`s to bring out gravel. 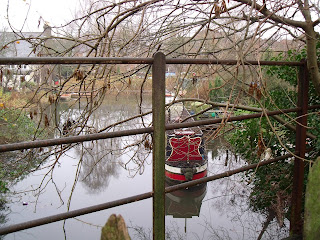 From the rail bridge the arm turns right past the now filled in Town Wharf and onto
the Gas Works. 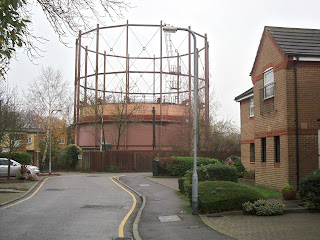 All that remains are two gas holders. The Station and sidings, the Town Wharf all built on. 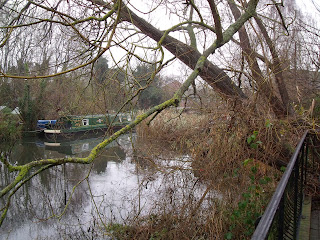 Looking back the Gas works site behind me and i would guess the Town Wharf arm went off to the right of picture. Still i enjoyed sourcing the map and information and walking around what must have been a very busy scene in working boat days.
Posted by Les Biggs at Friday, December 11, 2009