A CRUISE OF CHILDHOOD MEMORIES

Turning off the main line at Bulls Bridge the Paddington Arm is lock free for 13 miles into Paddington basin. Now i was born in this area and so the cruise became a journey back to my childhood with memories coming back as more and more water passed under the boat. So i`ll just dig out a mince pie to go with my cup of tea before i share my memories with you. 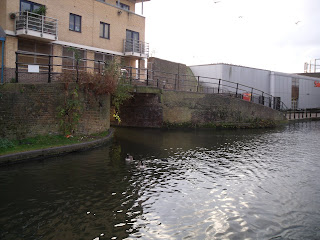 This is the arm that went into the Gasworks at Kensal Green and as kids we swam in the canal here as the water was always warm. Must have been something to do with the works. 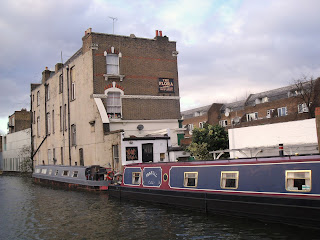 The Flora pub where Mum worked part time on top of her full time job elsewhere. Not until you grow up with a family of your own that you appreciate what your parents did to give you holidays and everything else that gave me a happy childhood. 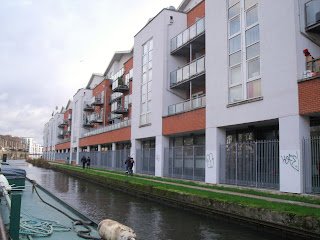 On this site was Askey`s factory that made ice cream wafers and cornets and the doors would always be open because of the heat from the machinery so we would get the broken cornets from the ladies sitting at the packaging tables. 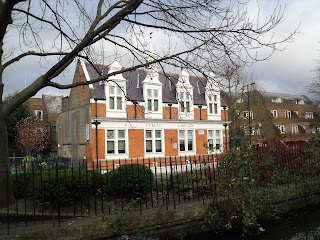 This was my local library where we as kids would go to not only get books but attend film shows. One memory was a tank of Tadpoles that everyone checked on each visit as they developed into frogs. 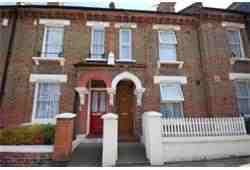 Behind the Library was Queens Park Estate comprising some 2000 plus terraced houses one of which was my home for 17yrs. There was about 100 homes in each street built around the 1870`s and you can see how big by the picture with just 2 up 2 down outside loo(they did get upgraded so a tin bath in front of the fire was bath night for quite some time) and a 20` rear garden. I remember i could just get my motorbike in the front garden and also remember when very young dad got told off for having his bike in the short narrow hall and almost divorced when mum found the engine in pieces in the back room.
Now they change hands for around £479.000 to young professionals and as the estate agents blurb says they are cottages with a village feel. I #######.........or words to that effect 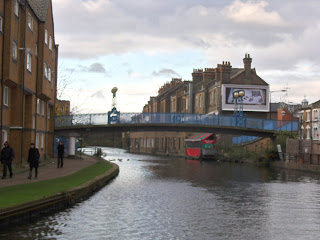 Lets drift on now i`ve stopped laughing at the estate agents and this is halfpenny steps, well not the original. The old high sided girder twin walkway bridge has gone but they can take away the bridge but not my memories. The toll was long gone when i was a kid but on the right hand side was the Harrow Road and i used to sell the evening Standard and the Evening Star for pocket money mostly to people making their way by Trolley bus to White City greyhound track. The punters would wait by the stand for the latest edition to arrive so they could study form on the bus journey. Most nights the Standard and Star vans would come round the bend racing each other to get their paper on sale first the bundles would fly out the door with the vans hardly stopping.
The flats on the left replaced the public baths and swimming pool where i learnt to swim while at junior school. It was also on this side of the canal i did my morning paper round the last call i remember was a cafe where a hot breakfast was always ready for me on the house after which a short walk along Harrow road took me to school.
EDIT: Just remembered it was the Evening News not the Star. 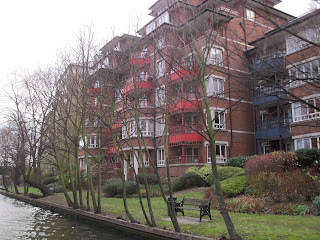 On this site before these flats were built stood the Paddington General Hospital and my memory is being taken by mum on the Trolleybus from the doctors to the hospital where i spent 2 weeks in isolation suspected to have Polio. I remember visitors wore masks and i spent hours looking out the window as working boats went past on the canal. I got the all clear(false alarm) and got out just in time to go on holiday the same day. Must have been a Saturday as in those days everybody started holidays on a Saturday. 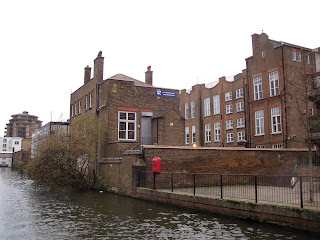 Just a bit further along and my old school still stands although nowadays it`s an Adult Education Centre. The small outbuilding in the centre of pic was the Woodwork classroom and we would queue on the steps and watch the boats waiting for Mr. Gibbons who on letting us in would shout "on your perches" meaning sit up on the wooden workbenches while he called our names to make sure none of us had dodged off the lesson. 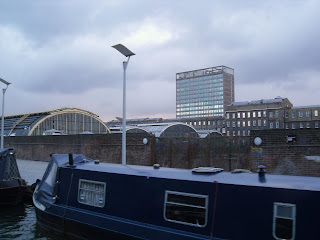 Turning into the basin at Paddington the station platform canopies can be seen and memories of trainspotting all day long with drink and sandwiches in a duffle bag. 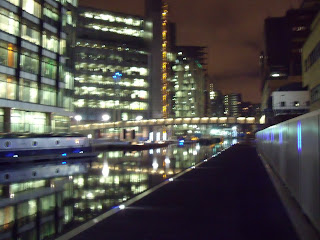 Further round into the main basin away from the trains but surrounded in this night time shot by office blocks this is the base for my trip abroad.

Different sort of blog to my usual but that last 2 miles of the Paddington Arm was a bit nostalgic so i hope you enjoyed me sharing a few memories with you.
Posted by Les Biggs at Saturday, December 19, 2009