On the 29th July we each paid £50 for a 2 week licence to cruise down the R. Avon as our BW canal licence is not valid on the privately owned Avon. It was a lovely day when we set off cruising with the flow of water making it`s way to the R. Severn at Tewkesbury and in the picture below is Bidford bridge and just through the bridge our first overnight mooring. 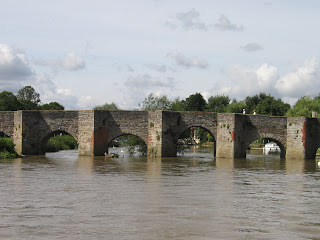 Andy/Tina on `Ytene` were in front and had moored by the time i arrived so i went through the bridge and moored alongside them waiting for John on `Tui`. Now if you enlarge the picture you can see on the left arch 2 arrows showing the navigable channell, the red no entry on the centre arch was not in place at this time as i took the picture on my way back but even so i think it is plain for all but an idiotic moron not to be aware of which arch to use.
In the picture below that i took as i went through the arrows are plain to see and no i`am not heading for the second arch just following the approach to the left arch avoiding some reeds on my left. 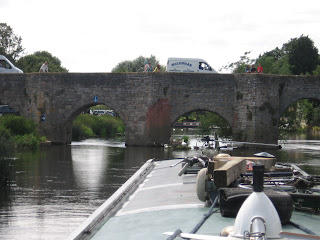 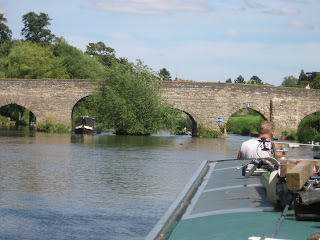 arch would be nice to cruise through, oh did i mention it was John on `Tui` and as you can see he is well and truly aground as the water under all the arches except the marked navigable one is only about 12 inches deep.
So off we set Andy and I to try and pull him back but as the pictures tell the story going through the arch and trying to get in position was not helped by the flow of water coming towards us and i ended up well and truly aground as you can see in the picture below taken on the other side of the bridge. 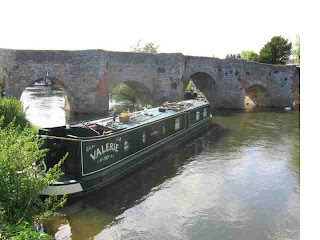 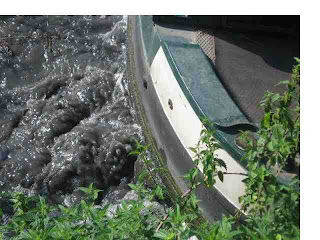 the power and in the picture above no matter what revs i used it was not gonna move. Perhaps in some of the pictures you can see a muppet or even John sitting on the back of his boat with not a care in the world and at one stage drinking a cup of tea so i shouted across and i won`t print here what words i used but the general idea was he should phone a boatyard and get some help. 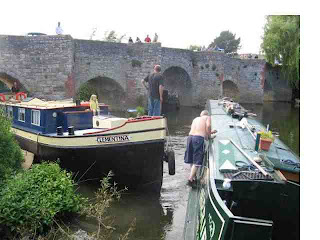 Above and below are pictures of a Dutch barge that arrived from a nearby yard to sort things out but even he had trouble even with his powerful engine and it wasn`t until 4 local lads walked along my boat and standing knee deep in the river used lengths of timber to lever the front off the river bed so that the Dutch barge could push the back end without the front going more aground. It worked and as the rear of my boat was pushed into deep water i was able to reverse.
He then pulled John out of the bridge arch.
Alls well that ends well i hear you say, i only wish it was because on mooring up my engine was not sounding to good. To cut the story short it appears that the excessive revving of my engine had damaged the piston rings and with engine removal, gaskets, labour etc i ended up with a bill of £1003.
I suppose you must be thinking John must have been beside himself with all the trouble he had caused but you `d be wrong, no thanks for attempting to help him, no asking what the engineer had said after listening to the engine in fact he never said a word but disapeared into his boat when Andy who at the time was standing next to me told him it was something serious, nice bloke eh well it was then and there i decided no longer would i be cruising with him but i needn`t have worried because the following day when Andy & Tina were leaving to attend to some business in Evesham that he decided he was going to head back to London and that was what he did no goodbye or thanks no hope all goes well with the repairs he just left. Well John if you or one of your mates read the blog GOOD RIDDANCE your an ar.....e. 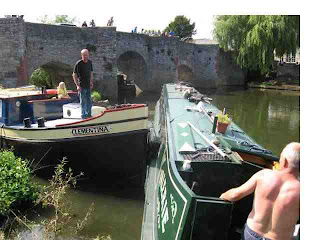 So after getting the repairs done i had been at Bidford 13 days after waiting 3 days for the engineer to find a time slot to start and with parts ordered from Holland and other complications i was ready to leave and catch up with Andy/Tina who had returned to Stratford on Avon as we had decided not to carry on with the planned trip to Gloucester as the heavy rain had caused the Rivers Avon and Severn to run fast.
In the picture below is the reason i ended up stuck at Bidford for an extra 2 days, the Avon rose 2` flooding the mooring. So all in all our trip on the Avon has been a nightmare and as i write this i`m back in the Basin at Stratford so just this once the blog is not of past cruising but bang up to date i`m here now but not for long. 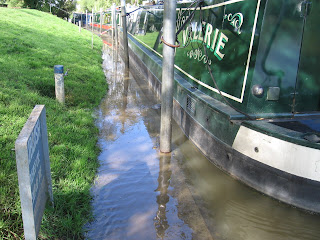 Although i`m the sort of person who would always try and help anyone with a problem of any sort i think in future i`ll just take a step back and give the matter some thought.
Posted by Les Biggs at Saturday, August 16, 2008

So sorry to read of your engine problem and even more shocked at the attitude of your cruising companion.

I can only echo the above.I am surprised he was not sent for a swim.

Les
i was equally shocked to read this. My experienc of boaters is that they are always there to help and not to take stupid risks. i hope you are not totally put off by this experience

What a complete idiot, best he's gone his own way now i think, hoping to see him one day on the cut and just hope he's in trouble as i cruise by laughing to myself

Hi Everyone
Thanks for your comments.
I do realise that the engine damage was caused by high revs on the engine when the dutch barge was pushing and i was trying to coax the boat forward as the stern was against the bank but none the less if it hadn`t been for John being an idiot I would never have been in that position.
This was just the final straw after so many stupid things he has done.
My biggest gripe was his attitude.

I am sorry to hear of your experience with trying to rescue the boat. I am surprised at John.. He must be on very limited income?

It is very unfortunate that the damage was done, yet I am also surprised at what damage! Normally these engines do pack a punch..

For sure he will miss you... His mistake, and he will rue the day.

I hope you will not let this cloud your judgement on others who need a helping hand, because for sure, we all need that hand sometimes you know.

From your blog, seems you needed parting of the ways anyway..

No problem "The Hitman" is on his case and awaiting a quiet part of the canal so he can face his worst nightmare.... goodnight

john the tit on tui

Hi Sue
A possible shortage of funds should not go hand in hand with a shortage of manners. No this has not put me off helping others but in future i will think through my actions carefully.
Regards to Vic.
Be safe & see you both soon.

Hey there hitman there`s no contract out so cool it please.

Les sorry to hear of your troubles. Sue is right, please don't let him put you off giving a helping hand, on the whole, it is usually very much appreciated.

Glad you are sorted now.

Hello Carol
Nice to see you pop up on the blog.
Thought you were going to pay me a visit one of these days. Anyway the offer is still there so look after yourself and maybe one day our paths will cross.

Lets hope so Les, my Mum is very ill so I have not been getting home to Crewe as many weekends as I usually do, in fact I have put the house up for sale, but not much interest at the moment.One of these days I will be walking along the canal and if you see a mad woman jumping up and down pointing you will know its me!!!

Carol
Sorry to hear about mum, hope she is well soon and I will keep an eye out for you.