Leaving the Stratford on Avon canal at Kingswood jct. we turn right and right again onto the Gd. Union. The junction is shaped like an H so we have come up the lower left leg of the H and across and down the lower right leg that goes all the way into London but that`s not our destination as the year is still young leaving plenty of time till my annual pilgrimage south for christmas. Just a couple of miles south is Turners Green where the canal is built on an embankment and makes a nice overnight stop with views of the countryside on both banks of the canal and very good reception for Sky TV.
Leaving in the morning although the sun was not shining it was warm and dry that is until we 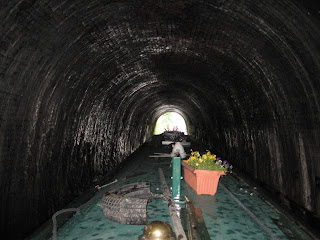 reached Shrewley Tunnel just 433yds long but as you can see on the roof of the boat plenty of water dripping down through the tunnel roof. Just a few drips so un like some of the tunnels no need for a brolly.... yes a brolly is needed in some as the water gushes down as if someone is standing above with a hosepipe and in the dark you feel it rather than see it.
The roof doesn`t have time to dry before we reach the Hatton flight of 21 locks taking us down 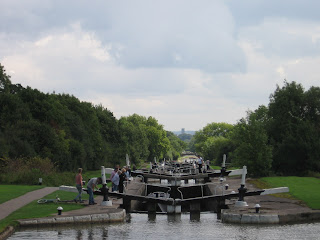 146ft into Warwick. As we descend we can see the spires of Warwick in the distance.
The flight as is usual at this time of year was busy with boats coming up so the descent is made easier as we swap locks with boats leaving the lock ahead which saves us filling the lock and opening the gates. Now if you look at the picture you can see that there are 4 ground paddles to let water in/out and 4 gates, now boats with plenty of crew would use all of these so if they went up or down the whole flight on there own and had to set every lock they would operate 84 paddles and open and shut 168 gates. When we go through we would only use one gate at each end of the lock cutting the gate openings down by half and don`t forget those paddles have to be wound open and then wound shut.
Spent some time at Warwick and as i mentioned on an earlier blog i was looking forward to son Andy along with Bev and Jordan/Jack and in the picture below whilst on a cruise for a couple of 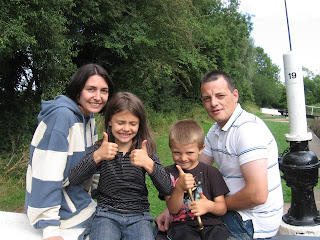 days i managed to get a pic of my crew resting, well it was Andy who needed the rest as a couple of days after this pic he reached the tender age of 39.
After the kids went home i once again had the boat to myself and found time to do some work on 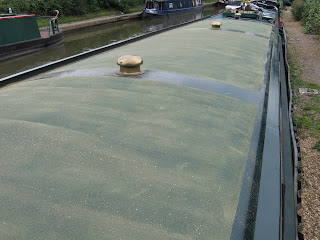 the roof. The roof had a slight anti slip surface on it but when cruising i spend a lot of time jumping up and down from the roof in locks and found the surface to be not to safe so the solution was to sand the roof. The way i do it is to mask up the panels and while the first coat is still wet sprinkle bird sand over the painted area then lightly brush off the excess and leave to dry before 2 more coats of paint are applied over the bird sand. In the pic above one coat of paint plus bird sand is drying. I have since managed to get the first coat on to the sand but am now waiting for a dry day to apply the next coat of paint. 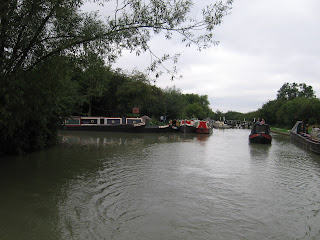 Above passing the Kayes Arm (left of pic) at Stockton Andy/Tina on `Ytene` bringing up the rear.
The next 2 pictures show the Blue Lias Inn firstly in 1955 and then as seen as we passed recently 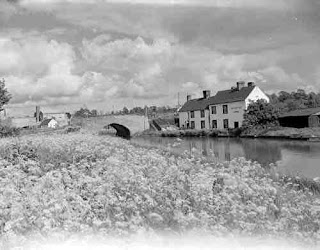 The name comes from the quarry`s here abouts that produced Blue Lias stone some of which was used on the R. Thames embankment also St Michael`s church in Stockton village. 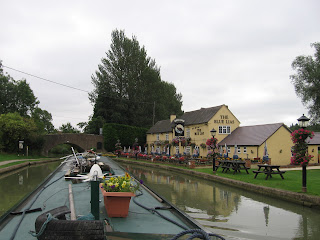 So heading to Braunston for the w`end so untilnext time bye.