Up through 7 locks brings us to Stoke Bruerne and what was an old 19c mill building is now the Stoke Bruerne canal museum, the cottages alongside the museum were once used to house the mill workers. 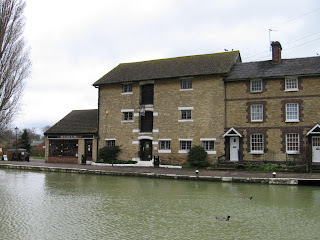 The canal museum at Stoke Bruerne

Also here at Stoke Bruerne lived Sister Mary Ward (1885-1972) daughter of a rope maker. Although not qualified as a nurse Sister Mary had spent 10 yrs as a nursing sister in convents across Europe and upon returning home to nurse her sick father she became the boat peoples nurse giving them much needed medical help long before the NHS started.
Sister Mary married and her husband Charlie Ward took over the family business that moved to a shed by lock 15 that was once occupied by a stone mason and this also became her surgery.
Until the late 1930`s she financed herself in the caring of boaters when the canal companies appointed her consultant sister to the boatmen and their families.
Boats coming up through the locks would know that upon seeing other boats moored up that someone was ill or that one of the boaters wives was about to give birth.
In 1951 Sister Mary was awarded the British Empire Medal and in 1959 was the subject of a "This is your life " programme. She retired in 1965 and passed away 7 yrs later.

Through Blisworth tunnel (3057yds long) on past Gayton Jct. where you can branch off to Northampton & the River Nene the next flight of locks is at Buckby and just before the flight I 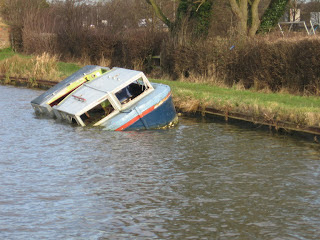 Noticed this cruiser still half submerged as it was a year ago. Climbing 63` through 7 locks brings us to Norton Jct. where the Leicester Arm leaves the main line but we are carrying on to Braunston.
The tunnel is 2042yds long and as i travelled through i remembered the landslide that had occurred last year restricting the canal width and view from both directions and in fact closing the canal for a short time so that emergency dredging could take place.
So having slowed down i was pleased to see that all the trees and vegetation had been cleared but still some dredging was needed to restore the canal to it`s full width but at least you can now see a boat approaching. You can see in the picture below I took last year the angle I had to steer around the slip to enter the tunnel. 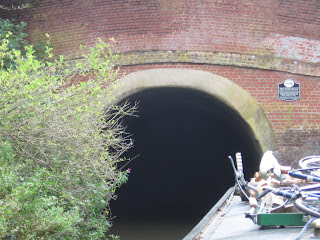 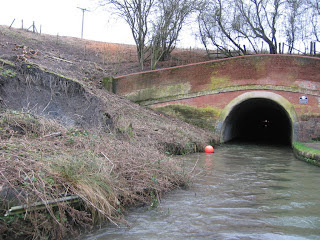 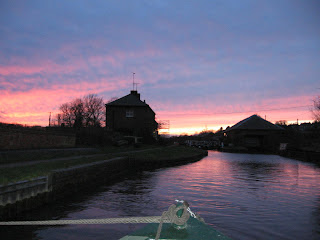 So as the sun sets over the bottom lock at Braunston I`ll say goodnight.
Posted by Les Biggs at Wednesday, January 16, 2008

hey, Les.
Just before all the picky peeps start up - that place is S..... BRUERNE!!
Wanna correct those typos???!

Awwww Les,
I thought you were going to change the spelling to put it right!!

Hi Folks
Have now corrected Bruerne.
Thanks for pointing it out nicely.
Can`t give the "you know who`s" a chance to slate me.
Thanks

Oh dear are you tiredy custards.
I`m heartbroken you`re bored because i`m having a great time.