STOP ME AND BUY SOME 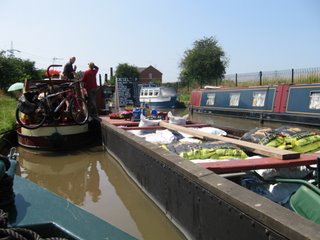 Sitting under my sunshade after returning from a walk across the fields to the town of Bedworth i looked up and saw one of the many old working boats that now service boaters needs all over the canal system. In just a small stretch he stopped at 4 boats and finaly moored alongside the boat in front of me. As he needed to get near the boats fuel tank he moved forward and moored partly alongside NB VALERIE after asking me if it was ok. This boat is owned and operated by a young couple IAN and ALISON. On board they had coal, firewood, toilet chemicals, b b q coal and plants to name but a few. Also they had that most inportant boaters need DIESEL. Look at the picture you gas guzzling road users and eat your hearts out, 51p a litre. Sadly Ian did not carry bottle gas, mine having just run out after 12 weeks 3 days, but as this is the couples 1st year they might in future add it to the stocks. Still no panic as narrowboats have twin bottles and with 12 weeks use plenty of time to replace the empty.
Ian & Alison service boaters needs on the Oxford from Rugby to Hawkesbury jct and upto Fazely on the Coventry. So boaters their phone number is 07913761871. Sorry road users boats only, strictly illegal in your vehicles. 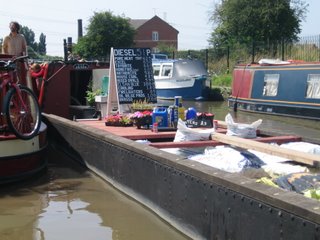 We are not 'gas-guzzlers' through choice. the govt allows red diesel for farmers and I believe leisure craft got into the category somehow. I'd LOVE to only pay 50-odd-p litre for my car, but they demand my taxes to the hilt. AB

I know how you feel, when i was self-employed before i retired i had to run vans so i agree with you everywhere tax tax tax.
so i do feel lucky now having little tax to pay. Not even got a leccy bill so they can`t tax that.
LES

No problem here either and as a company car owner i never so much as even look at the price board upon entering a petrol station as i dont pay for any at all, whether i thunder up the motorway at 90mph or 30mph in town makes no difference to me at all.However i have heard that canal boats may have to use the same diesel as normal road users and hence you guys may soon be paying up to 95p per litre........watch this space.

I don`t think the deisel will rise dramaticly but even if it does i am happier using my diesel now than when it went into a van fuel tank.

It has now been confirmed that as of 31/12/06 lesuire craft will not be exempt from cheaper fuel, the price for your diesel from this date will be exactly the same price as any other road user filling up at a ordinary petrol station, thanks to us joining the EU this is the outcome although farm machinery etc will continue to recieve the cheaper fuel.All good things come to a end as they say.

Les, I found your blog recently and have gone back to the beginning! Loving it. I can only dream of a life like yours. Cheers, AlistairB