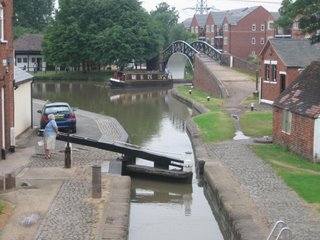 Standing on a bridge with the Oxford canal coming through the stop lock into the basin. A boat is coming under the bridge from the Coventry canal. The Greyhound pub is out of sight to the left. 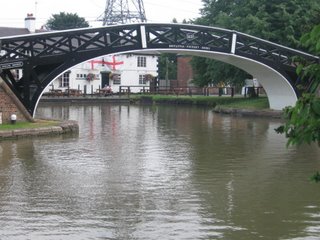 Viewed from Coventry canal the basin under bridge. Left onto the Oxford Canal. Where i am standing was once a boat yard but like so many places on the system it has now given way to housing. 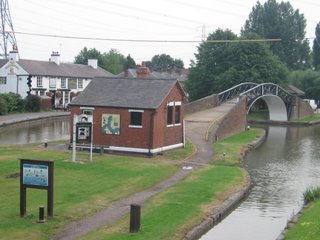 Again from the Coventry, Greyhound pub across the basin and toll house between the canals.

The actual jct. of the Coventry & Oxford canals was originally about a mile away at Longford on the way to Coventry and upto this this point the canals ran parallel. It was not untill some 8/9 years later that Hawkesbury jct. as in the pictures came about thus cutting out the extra mileage of the original route. The toll office was for a long time manned by generations of the Sutton family and so the boatmen called the jct. SUTTON STOP. The Greyhound pub at the edge of the basin had a feed store and stable at the rear for the horses that pulled the boats. So mybe they should have a diesel pump to feed my horses! Will check tomorrow.

Amazing the things that have gone on while i have been living my previouse life. This is like going back to school, so much to learn not just from the canal. Coventry City was an eye opener, the amount of industry once there and what they produced also the bombing and how the city became what it is today. The canal routes zig zagging until they were straightened all for speed to compete with other canal companys. Suppose a bit like our road system till they built those straight direct motorways, and two i can think of have toll houses. Like the fashions of the past all going full circle. Hope all this full circle lark don`t mean i end up at work again......no chance to much to see yet and I`ve only just begun-song there somewhere, answers on comments please but no prizes.

Well after coming off the Ashby with my mate John i am having to stay at Hawkesbury Jct. for a while as sadly John has had to go back to London for a funeral so i am looking after his boat as he did mine when i went home, no the boat is home, i visited family. The weather is not to good at the moment had some rain, wind and plain dull day.