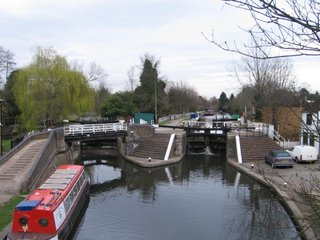 The view in the picture is Batchworth Lock Rickmansworth. The grand union is via the right hand lock, and to the left just under the footbridge is a set of padlocked lock gates beyond which flows the River Chess. The moorings are very good here with plenty of newly installed rings and a decent towpath surface. Just 50 yds beyond the moorings lies the aquadrome consisting of to large lakes that is in the process of a very big facelift. A quick look through the gate off the towpath shows lots of tree cutting and a bridge under construction, will walk around tomorrow.
Just before mooring i used the BW services emptying my toilet cassettes and clearing the front deck of my rubbish. Someone had decided to bin a folding bike-gold dust to a boater- so out it came and half hour of TLC the tyres inflated and gear change adjusted, a bit of oil here and there and i now have a 3 speed folding bike. Now as i already have one on board it will have to be found a new home!!
Sitting looking at the Nicholsons map i think i will have my work cut out to stick to my plan as previously mentioned, the problem being i forgot all about the easter break (thats what it`s like this life -no concept of time) so this means after visiting ex workmates i will not be turning back till wednesday after easter. Just have to see how it goes.
Feeling shattered after not moving so long and then 4 locks so early to bed and up early ish ish to walk round the lake. Must keep exercising must keep as fit as i am after 20 yrs of jumping in and out of a van 60-70 times a day. To think i could still be doing it now if i didn`t make this "change your life Les its the only one you get" decision. Early days yet but i am convinced it was a good move.
Posted by Les Biggs at Wednesday, April 12, 2006

Ah it is a good move Les.. How about a run round the lakes in the morning then? That will get you fit. Mind you the locks are heavy going down to London.. that will build your muscles up! Give my love to Uxbridge when you pass through.. spent a bit of my life living there. Sue xx

Hi Les,
Sorry to hear about the split, i hope you can both find new happiness. I know the stetch of GU you're on now, I live in Hemel and walk fom Denham to Marworth regulry (not in one go !). I was the guy you spoke to on Canalworld re your boat builder a few months back. I hope to see you one of these days when Im out and about and I'll stop and say hi. Enjoy the trip, your coming up to a wonderful time of year and Im sure that will help to lift your spirits. Good luck.
Les

When we get some, the sunshine will cheer you up. You will meet more friendly people while locking two boats at a time. Take time and enjoy.
Chas n Ann

Thanks for your kind words folks. So nice to know someone is reading the blog.the lakes were a nice walk sue. Is that you " LES D " Must get the name on boat so you can stop me for a cuppa. It`s plain green and cream coachline.
Have only shared one lock so far chas.
LES

Hi Les,
Sorry to hear about all of your turmoil. I hope that the spring days, travel on the canals, meeting new people, and enjoying the day will help to smoothe things out. I certainly enjoy your stories on the blog. Best wishes and Happy Easter.

Hi Les,
Yes its LesD here lol. Girl friend dog and I walked past Batchworth lock this afternoon upto Springwell lock but didnt see you, so I guess you've moved south !
Im sure I'll recognise your boat I saw it just before it was completed down at Winkwell. Hope your enjoying the Easter cruise
LesD