"Even with all our technology and the inventions that make modern life so much easier than it once was, it takes just one big natural disaster to wipe all that away and remind us that, here on Earth, we're still at the mercy of nature." ~ Neil deGrasse Tyson, American astrophysicist, planetary scientist, author, and science communicator.
The National Oceanic and Atmospheric Administration (NOAA) defines an ice storm as a type of winter storm characterized by freezing rain, also known as a glaze event or, in some parts of the United States, as a silver thaw. The U.S. National Weather Service defines an ice storm as a storm which results in the accumulation of at least 0.25-inch (6.4 mm) of ice on exposed surfaces...occurring at temperatures just below freezing.
Two storm fronts collided over the Pacific Northwest (PNW) of America last Friday, February 12th. A frozen cold low dropped down out of Canada, through Washington State and crashed into a large warm, wet storm front rolling in off the Pacific Ocean, resulting in Ice Storm 2021. This was the first of three storm fronts we were warned, due to plow through Western Oregon/Portland area (we live 15 minutes south of Portland in Gladstone). The second storm was due Saturday the 13th with additional snow and the third would bring warmer temperatures and rain on Sunday the 14th.
For those who are not familiar with the Pacific Northwest, the States of Washington and Oregon are divided vertically by the Cascade mountain range which begins in British Columbia, Canada and continues down into California. The weather west of the Cascades is a wet, mild maritime climate much like England's. Portland, Oregon is only 98 miles east of the Pacific Ocean. The mighty Columbia River has worn a gorge horizontally across the landscape for hundreds of miles on its way down from Canada to the ocean. The Columbia River Gorge is the geographic dividing line between the bottom of Washington State and the top of Oregon--all the way to the ocean and it acts as a wind and weather funnel moving massive amounts of both off the Pacific ocean and right over Vancouver, Washington and Portland, Oregon--cities that face each other on either side of the gorge. 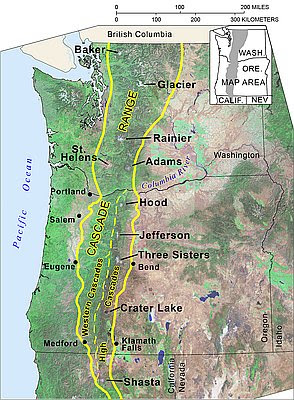 With a general maritime climate and humidity that seldom ever drops below seventy percent, snow it a rarity, and Western Oregon homes and businesses are not built to withstand freezing cold weather events. Certainly Portlanders are clueless about driving in snow and ice, so this dire warning given on Thursday, February 11th, did not bode well. We have a fireplace in our apartment, but we had no firewood. A family meeting earlier in the autumn determined that we didn't have the money to buy a cord of firewood and where would we store it? Here in the greater Portland 'burbs, everything that is not locked up, is stolen by neighbors or the homeless encamped down along the Willamette and Clackamas rivers. The confluence of  both is directly behind our apartment complex, with a narrow greenbelt of trees, shrubs, and a paved pathway between us and the river's edge; lovely to look at but deadly in an ice storm as it turns out. Anyway, we opted not to buy firewood and after being evacuated for the wildfires in September, (which I have named Exodus Chapter one), the entire idea left our minds.
Late Friday morning the snow began to fall and stick. Two of my girls were released by employers to come home early. Shiery was at a client's home, finishing up a twelve hour shift and she got stuck on the soft dirt driveway with a small hill going up to the main road. Off Mary and I went in in Kelli's Kia to rescue Sparky. My Subaru was a frozen solid mass of ice two inches thick and about as useful as a chocolate teapot! We had to traverse freeways nearly empty of traffic, and Portland streets winding up and down and around in the night time while the snow continued to fall and the streets were clogged with nearly  seven inches of snow and other drivers stuck in their vehicles. We made it, and managed to free Shiery's car with the help of one of the neighbors. By the time we arrived back home it was close to 11 pm. The wind outside was howling and the snow had changed to wet sleet sticking heavily to everything.
We lost electric power shortly before Mary and started out to help Shiery, so Kelli stayed home with the animals (five cats and a neurotic dog), and kept the fire going in the fireplace. We had  enough wood for one night!
An initial check-in with Portland Gas and Electric (PGE) indicated power would likely be out until the 16th. We needed to scrounge some wood, and get some ice for the fridge and freezer.
Around 1:30  am Saturday morning we looked out the window to find a frozen landscape glittering with a coating of ice. Trees, loaded with snow and ice began to lose branches as they snapped under the weight, sending a noisy shower of ice to the ground that sounded like a rush of loudly crinkling tin foil. Every now and then a sharp crack would report across the midnight air as entire trees snapped off and the wind blew them around on their way to the ground. This continued without let up for 48 hours! Saturday night we were all woken by an enormous, heavy thud that sounded like it was right on top of us. A tree had come down and hit the balconies of two apartments just down from us, removing their balconies and eventually piercing completely through the dining room wall of the ground floor apartment below them. The clean snow out our back patio was now littered with broken branches of every size and part of a fallen tree. Our animals were completely traumatized as were we. Every time we heard the beginning of another ice fall, we held our breath and waited for a tree to come crashing through our dining room window.
I dug out my Cobb Oven and set up a kitchen on our back patio, with a cooler for our most perishable food items. I had made a large pot of Bison stew on Thursday and there was plenty left over. We also had a freshly baked Gluten Free lemon cake, sandwich fixings, some fruit, and instant oatmeal, so no one was going hungry! We heated water in a pan on the logs in the fireplace, and could also cook spuds wrapped in foil. Mary and Kelli scored some wood from her mom who heats only with wood, and that got us through the next days. By then PGE was no longer estimating a return of service! I was prepared for two weeks, as this was my second ice storm.
My first ice storm was back in 1996 while my children and I were living in a house on South Hill in Spokane, Washington--a city of over 340,000 and the largest city between Seattle, on the coast, and Minneapolis, Minnesota, 1332 miles eastward on the Great Lakes. This ice storm was so profoundly devastating with so many mature trees uprooted and downed, that many businesses were without power for weeks and our neighborhood was without power for two months! My children were farmed out to the homes of friends across two counties and I was managing between work as Spokane Public Radio, and the homes of friends who had power restored. Clearly ice storms are nature's means of pruning the forests.
I am happy to report we all survived Portland's Ice Storm, albeit a little frayed around the edges. The snow and ice are gone, clean up crews and property maintenance have tidied things up here at Rivergreens, and life is back to normal now.
Posted by Mrs. Jaqueline Biggs at Thursday, February 25, 2021

Sorry to hear you've had such a rough time of it but glad you've all come through ok if a little frayed round the edges. Hope things improve weather-wise and life soon gets back to normal or as normal as life is at the moment. Love and hugs Judith nb Serena

Thank goodness you all came through that nightmare more or less unscathed Jaq. We know that you are made of strong stuff and can overcome most adversity. Stay strong, safe and well. xx

Hi Jaq - I've been through ice storms (central Illinois) and they can be sparklingly beautiful but terribly destructive. So glad you had a fireplace and wood and I hope you had the opportunity to make smores. :-)
You all stay safe and sane.
Karen and Pullman, WA

Morning Jaq. What can I say, except been there, done that, in both Southern Ontario and New Brunswick. All you can do is sit tight until it thaws. In Ontario power outs were common enough that we bought our own generator, not practical for apartment dwellers, I know.
Mike & Phill, NB GARNET.

We manage to return to the somewhat normal semblance of life--onward and upward!

I hope you both are doing okay. I saw a post of yours on a FB page the other day commiserating about having to live off your boat. I hope life has been kind this past year on land. I feel your need to return to the water. I feel that every day!

Thank you! we are so grateful to have a working fireplace, which made all the difference and that the falling trees and limbs stayed away from our apartment.

I see from boat blogs that spring is rustling along on the cut and across Britain. I wish I were there for it. Les' Daffodils should be blooming any time now.

Here is is gray, cold, and wet. Heather is blooming the gardens throughout the apartment complex.

Ice storms are all you have said. They are nature's means of pruning the forests. Life is back to an even keel again. I hope you are well and taking care.

Give Hector a hug from me!

I an well imagine the brutal storm systems that cross Canada in winter! You are so right about having to sit tight and wait it out. Fortunately this storm was short in duration and so was the power outage for us.

That's the lovely thing about living on a boat. No generator required; an accessory that helps but not an absolute--especially with solar panels.

Love and hugs to you and Phill,