Catching up, Moving On

"We understand death only after it has placed its hands on someone we love." ~Anne L de Stael

While moored up at Stanton Low I was pinned down by pouring rain and high winds for four days. Without Les I have to relearn how to live on the boat. I am doing the work of two people now, and I am six and half inches shorter than Les was, and my arms are five and half inches shorter (yes we once measured them!) so I simply have to slow down, think things through, try something and discard it if it doesn't work for me. If I am going to stay on this boat then everything on it must work for me now. One of the things I definitely will not do is attempt to move an eighteen ton, fifty eight foot steel boat in high winds!

As I sat peering out the windows through the rain, an amazing array of boats passed--all on their way to the Crick Boat show taking place this weekend on the Leicester Arm. One gloomy rain sodden morning I looked up to see the bow of a boat moving very slowly past. It was the most unusual color of blue and then I was struck by the thought, "What a minute! I know that blue!" As the stern passed me, I poked my head out the window and hollered at the figure dressed in rain gear with an umbrella in hand, "Hey you!" It was James and Doug on NB Chance, headed to Crick to sell their boat. They were looking for me but of course, NB Valerie is traveling incognito these days with half a paint job and no sign writing declaring her name. James quickly pulled over in front of me and moored up, and came to hold an umbrella for me so I could cross to their boat for a cuppa and piece of cake. We spent an hour catching up and it was lovely to see them both, especially since they will soon no longer be cruising the cut in their distinctively blue colored boat.  It is up for sale and a new chapter will soon begin for them both. 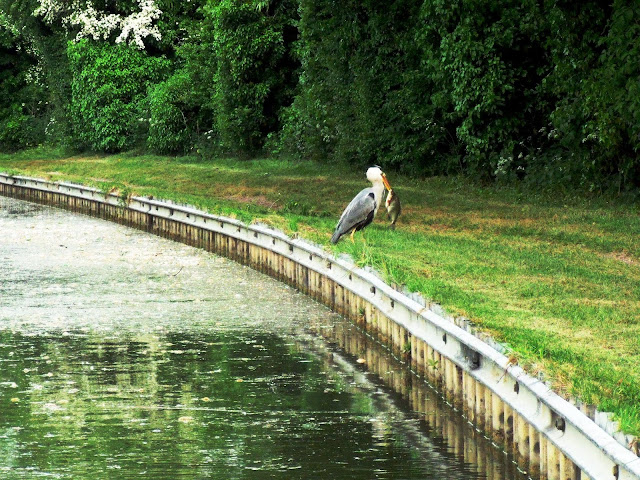 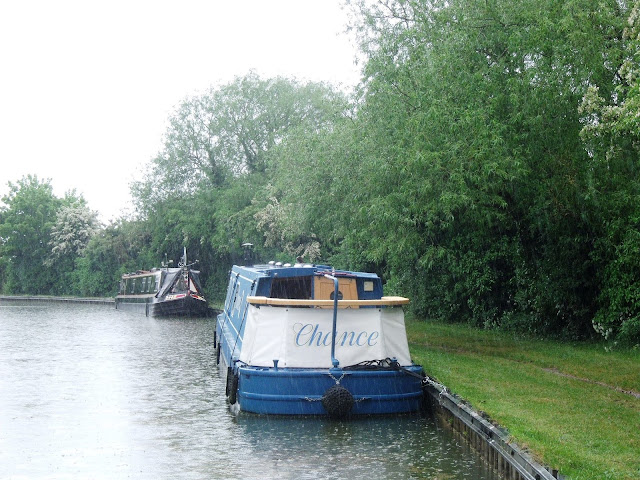 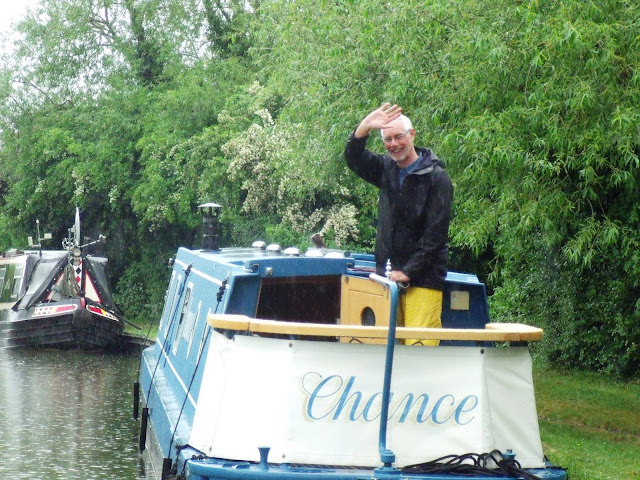 Finally the weather cleared and last Thursday I upped sticks and cruised three miles to Cosgrove. As I passed through Wolverton a couple of blokes on a pale green boat called Dunrushin waved and commented on the nice weather. We exchanged words as I passed with a smile. Everyone was pleased to see the blue sky again. After cruising across the Great Ouse Aquaduct I was facing my first lock alone. Cosgrove lock is a tricky one as well because it presents itself at an angle and there is a water point just to the starboard side (right) as you face the bottom of the lock. If a boat is getting water is it extremely awkward to advance in to the lock and trying to do that single handed even more so. Fortunately for me, a local boater on the nearby permanent moorings was out walking his dog. He piped up,
"Throw me a windlass and I will lock up up."
YES!! As the lock filled and NB Valerie rose I chatted with him.  In his late 70's with bad knees, he found it necessary to take a permanent mooring last year. I thanked him as I cruised out of the lock and headed for the other water point about five hundred feet from the top of the lock. Another boat was already there but they saw me hovering and invited me to breast up with them so I did. They were almost finished and we did a lovely little dance with our midlines, as we switched places; they gently cruised away and I pulled our boat in to the side.

Very glad there are lovelies about to help you, and that you're remembering to eat. We love you 1000 Swedish Fish ❤️

I think I might have already passed you and not noticed. Thursday and moored up just below Bridge 24 at Weedon.

I'm touched by your memories, Jaq, and by your soft strength to grieve in the courageous way you're living and sharing. Planting the daffodils is a wonderful memorial to Les, and a fine metaphor for your life together now and always.
I have to tell you that in the Community Choir I sing with--no auditions, we just like to sing--we've just gotten a new song: The Barley Mow. It's a pub song on the order of 99 Bottles of Beer. You've likely heard it, but if you haven't I'll sing it to you when I visit, and I'll bring a few more songs to teach you.
I hadn't thought about how handy and smart you have to be to handle your craft in and out of locks and tunnels. I'm impressed at your seawomanship. Gland grease! I'll remember that.
Much love,
Nancy

Wile I am alone in life, I amsurounded by wonderful, kind, and helpful folk. I cannot imagine living anywhete else. I am eating, although I really have little appetite. I make myself eat anyway.

I will be in Weedon tomorrow.

I cannot wait for your visit! I look forward to learning some pub songs woth you and sharing a bit of my life on the cut with you. I think you will enjoy it.

Hi Jaq,
Lovely to read of your journey - even tho it's solo. You are so amazing: I know I couldn't deal with the boat on my own in and out of locks! Well, I suppose I possibly could but I know I'd be stressing to the max ...
We are at the bottom of Hillmorton Locks tonight - lovely evening. Where we are moored feels weird on two counts:
* we are moored on the Long Term Mooring - the CRT lockie told us to, and
* we are on the winding hole - that's where the long term mooring starts!
Looking forward to seeing you soon.

We are meeting Mick and Julia on Thursday at 103.
Mxxoo and Biggs hugs, girl!

Jaq - I really like your new top photo - lovely framed shot of your home. It sounds like you life is settling down a bit ... jolly good though I know four months .... is still just an eye blink way. I love the planting of daffodils at your favorite shared spots.
Karen in Pullman