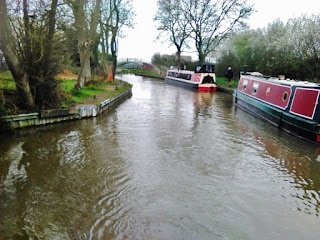 We cruised through Braunston today when we spotted Pip and Roger's old boat NB Windsong moored up across from the service
point just past the two arched canal bridges.  I remember the last time NB Valerie was moored there.

It was January 2013 and we were full of excited plans, making our way south to spend the summer cruising on the Thames. It was while we were moored here that Les experienced his first overt symptoms of colon cancer.  We didn't know what was making him so ill, but as someone who could have died from a micro-perforation of my bowel due to diverticulitis and a massive infection which resulted in surgery to remove 18 inches of my sigmoid colon and resection of my bowel  I knew that whatever was after Les was severely serious in nature.

True to form as a typical man Les ignored these symptoms until they became so debilitating and painful that he was beating his forehead on the counter, begging the pain to stop. Only then would he listen to me and finally see a doctor. That was seven months later. I cannot pass this mooring spot in Braunston now without a shudder of disquiet and I don't believe I can ever feel happy or comfortable mooring up in this spot again.  This is Les' story so he will continue this narrative now...


It`s now been two years and eight months since I had my initial diagnosis of Colo-rectal Cancer. As regular readers know, it moved to my liver and then my lungs. Now after two major surgeries, Sepsis, and two Radio Frequency Ablation procedures to burn away four cancerous lung lesions plus about a dozen scans each accompanied by bloods being taken it seems my lodger Mr. C. has shall we say got shy and gone into hiding.

My latest scan results show no growth in the one remaining lung lesion over the last six months. Now please don`t think I am cured because many many years would need to pass before I would feel able to use that word. I am very much aware that somewhere in my body Mr. C. lurks but is for the moment unable to settle in and thrive.

So at the moment I feel happy to be free of wondering at every three month scan if Mr. C. has moved on from the lungs or remained and brought in reinforcements. But what about at the beginning, 32 months ago; what did I think then and more important how might things have been different if I had still been a bachelor boater.

I remember walking back from the hospital a little wet eyed but that was because I had just two years previously married Jaq, and was not ready to die; life was just beginning again. Jaq and I had an idea of the diagnosis and we had discussed traditional versus alternative treatments that I might follow.  Jaq would back my decision 100%.

Sadly my life had already been destroyed by pancreatic cancer when it took my wife Valerie in 2000 after she went through sessions of chemotherapy. Several times Valerie was in Mt. Vernon cancer unit; sometimes as an in-patient and the sights and stories told by other patients informed my decision eleven years later. Straightforward.....No chemo. In my mind it was crystal clear to have surgery to remove the tumour since the scans showed no other parts of my body infected.

Less than a year later it had spread to my liver requiring another major operation. A short time after that it had reached my lungs. Since before the bowel surgery, we had changed my diet dramatically and I was taking supplements so this was all very depressing but having made a decision of alternative treatment coupled with surgery all Jaq and I could do was carry on with our plan. At each stage as the cancer progressed, my doctors would release additional bits of information that led Jaq to tweak my diet and change my supplements and therapy.

All I ever wanted as every hurdle appeared, was to get over it and go boating and that was what we did even though most times it was for very short periods.

This experience has been a joint effort but I do wonder how different things have been if I had been a single man boating alone. I do think after initially refusing chemo and just having surgery,  I would have consented to chemo after the liver surgery.

We will  never know how that might have unfolded but I do feel no one would be reading this. One sure thing is the Sepsis would no doubt have been the end because without Jaq I would not have known the danger I was in.  I would have just gone to bed feeling rough and died in my bed. In the UK 40,000 die from sepsis each year, multiply this figure by 5 for the U.S.

Just to finish can I say that Cancer is a nasty disease and the way each person deals with it is a very personal thing. No one has the right to tell others what treatment is the best choice for them. All we can do is share our experiences and hopefully others may benefit from it. All I can say is read as much as you can on top of what you are told by doctors and make your decision. Be positive all the way through to what we hope is a good result.
Best wishes and thank you all.
Les
Posted by Les Biggs at Friday, April 15, 2016

Please don't think I'm stalking you guys, but I just wanted to say thank you for being so candid and sharing your lives with us. Mr. C as you call it, is everywhere but your continued grit and determination to fight back is inspiring.

We English (sorry Jaq) are rubbish at sharing feelings and emotions on the whole - we could learn a lot from our American cousins... and we SHOULD!

sending a strangers love to you both.
Mark.

May your improved health be a permanent feature, Les. I have learned so much from your journey, and am clear that surgery and a total diet change would be my preferred treatment methodology, should it ever come to that.
Go well, stay well, friend. Love and biggs hugs to you both, Mxox

Good post guys, so glad the big bastard C has gone into hiding, long may it stay there.
Paul xx

As you say you can overcome most things if you do it TOGETHER and you have bothe been very determined to progress through this most difficult journey by sharing it.
Now, just relax and enjoy your cruising and being among all your boaty friends.
nb oakfield

Hi Mark I find sharing my story easy because it's far from an exclusive. Perhaps with so many of us in this world fighting the same battle my experience might help someone.
Les

Hello Marilyn is it not time you got back here for some boating. Of all the decisions we all make in our lives choosing a way to fight C must be the most stressful for most folk.
Les

Hello Paul and El I most certainly hope he does stay hidden and hope what I choose to fight with works. No time to even think of the worst, there's boating to be done.
Les

Hello Keith and Ann yes nothing beats having a good partner to help defend your corner. Best wishes.
Les

As always I find your blog posts whatever the subject matter, well researched and informative. I too if ever Mr C comes to visit will definitely not have chemo, will consider surgery, will do my best to eat and live well. What happens next will have been my choice all the way. So glad you are finally off boating again, have fun and mind those knees! :)

You just keep fighting the good fight, Attitude is everything. Love Carol BV

Hi Kath! We are so pleased you enjoy our posts and find them well researched. We do our best on that score, as we want to make sure what we share with our readers are the facts in so far as we can find with proper support to ensure veractiy.

Hi Carol! I was jsut thinking about you the other day and wondering what you were up to as we've not heard much from you lately. Is life treting you well? We hope so.