Eight minutes is not a long time although I guess that depends what is going on as those minutes tick away. Just by chance I clicked on one of my half dozen shots of the sun setting at Radford Semele near Leamington Spa and noticed the time. Looking at the others I chose these two completely unaltered images because they were so similar in content and then checked the time difference.........8 minutes. 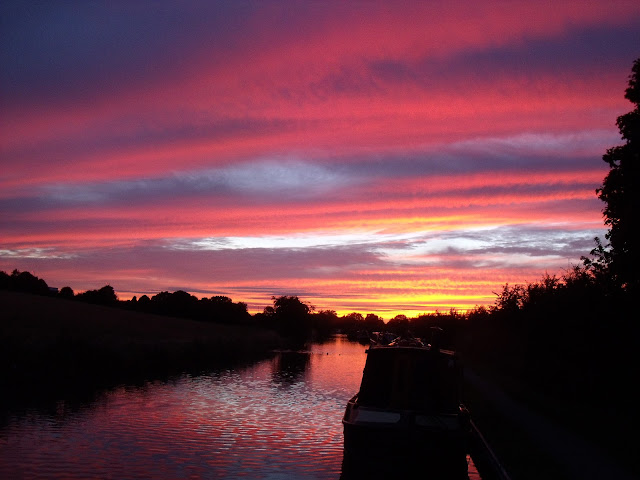 So just because I have the time and because it amused me I looked towards Google and searched "eight minutes". Not much so a new search "what could happen in eight minutes" was entered.
Bingo! It seems if the sun disappeared we here on earth would not be aware for about eight minutes the time it takes for the sun`s light to reach earth. After that the moon if out would lose the sun`s light reflecting on it and as with the other planets would also fade away.
I dedicate this blog post to every retiree who now has time to look into the things in life that escaped their attention while being part of the mad world called work.

Love the photos, but what a depressing thought that you would dedicate this post to all those who have given up work! As if life isn't pointless enough without being reminded of the end of the world ...
You are a hoot, Biggs, Mxox

Fabulous photos there, we are also amazed at how quickly the skies change. I think that we boaters are more aware of the changes because we are usually out in the countryside.
Eight minutes is also the response time given to Ambulance crews to arrive! This is a bit of a joke considering all the traffic clogging up the roads these days, isn't it?
nb oakfield

Marilyn
You can always retire early, let`s face it you are only part time anyway.
Just think you could become proper boaters cruising through the winter and enjoy having the canals to yourself.
Mmm best not give folk the idea we like the peace of winter.
Lesxx

Hi there Keith/Ann
hope you are both well. When I go to London and see the blues and 2`s trying to get through the traffic i do wonder how many lives are lost to the delay.
By coincidence I have an air ambulance in a future blog post.
Les