So far have one of three tests arranged. Sorry for the lack of blogging this past week but had a lot on my mind wondering what is lurking within me. Not moving far at the moment as we need to stay in the Hertfordshire area to access one or more of three hospitals.
We have decided to get a Freeview set up as a back up to the satellite system that seemed to always dictate our mooring be where the satellite can be seen by the dish. All working so with a more settled mind lets catch up on the travels of Nb Valerie. 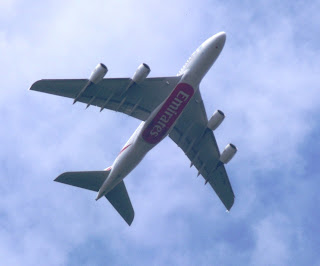 Moving along from Windsor we had been told about moorings at Dorney Lake about 2 miles upstream just after Windsor racecourse. A big part of life along the Thames so far has been aircraft coming and going into Heathrow which from Dorney is about 8 miles. No prizes for the company name but we might give you a mention if you can supply the captain`s name. 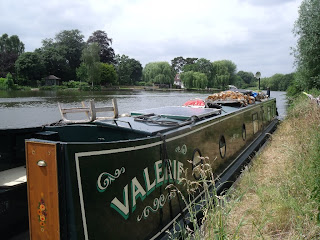 So acting on information received we found a nice mooring with no restrictive signs so a nice few days were spent watching the world float by. There was enough room here for about three boats and it was full most of the time with vacated space being filled quickly. The river was very wide here on a bend just past the racecourse marina entrance and some very large houses opposite dominated by the expanse of water seemed far away. 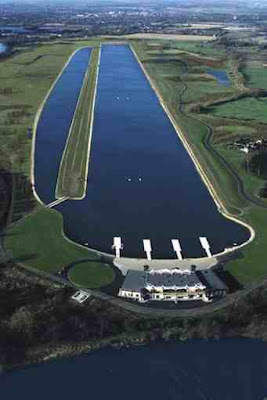 Constructed and owned by Eton College, Dorney Lake was used for the 2012 Olympics rowing events. It is 1 mile 700 yards long and has eight lanes. The narrower slightly shorter section on the left is a return/warm up course.
The competition course is about 12feet deep and is fed by underground streams.
As in the case of the Olympic white water centre up on the River Lee Dorney Lake is also open to the public. It took ten years to construct and a lot of archaeological finds were discovered.
While we were there several company's were taking part in corporate rowing events to raise money for charity. 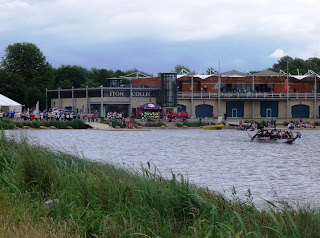 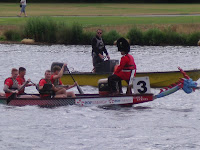 A little video of the Dragon boat racing
Posted by Les Biggs at Saturday, August 10, 2013

All good thoughts with you at this worrying time.

Hi Les. Good luck with your tests - thinking about you both.

I've been to Dorney Lake quite a few times, but never seen it from THAT angle! It looks much more impressive from above.

I can wave at the passengers on-board that aircraft when it goes over my house just before landing ;-)