Lovely scene below from the front of the boat unless like me you just don`t like being tied to one
spot for to long. That towpath looks reasonable but take my word for it there are several sections that are just ice and walking and staying upright has become a new skill i have had to acquire. 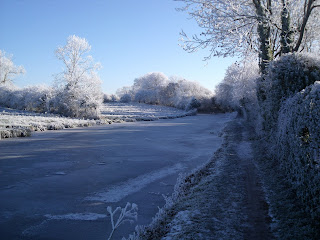 Looks so pretty, calm peaceful doesn`t it but not far round that bend saturday last a man in his 30s was found dead in the canal. I had of course already heard on the towpath telegraph about the
poor bloke but what was nice as i walked out past the long deserted scene were the many bunches of flowers and candles that had been placed at the spot. He must be missed by many. It was however spoilt 45mins later as i returned the same route to find them all kicked into the canal. I say kicked because surely the scum bag that passed by for sure didn`t bend down to pick them up before scattering them on the ice. 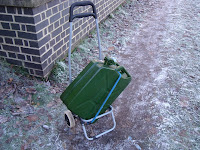 with my small set of wheels became my saviours. My rough estimate of the boat tank contents was about 35 litres perhaps a little more but as we are all aware in those lower levels lie sludge and water not ideal for the delicate workings of an injector pump. Now as i said before i have been using the generator to charge the batteries but that doesn`t give me hot water and i do miss my shower and being able to flick on the central heating first thing.
So with the contents of the already filled can and 2 trips along the towpath i know have approximately 90ish litres on board so all is well for a while. It was worth the walking just to be warm and clean because a sink full of water, heated on the top of the solid fuel stove, is just not enough for a good wash.

Back in mid november the boat decided it was not going to start one morning although the starter motor was full of life apart from the weird noises it was making. If i new then what the problem was i would never have used that kind of language. so only thing to do was remove the starter to make a decision of burial or some TLC. Now as i don`t believe in keeping a dog and barking myself i called on the men in white vans with RCR painted on the side. 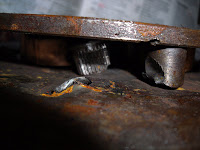 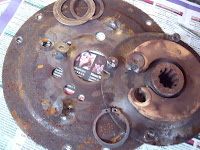 The result was that one of the splined rivets (see right pic) holding the 2 parts of the drive plate together had broken away and become lodged in between the fly wheel and starter mechanism. So starter now works but the drive plate is in big trouble is the diagnosis. Cutting the story short parts ordered and fitted and you can see in the picture above left all that was holding it together was the circlip that when i removed it the two parts, well they parted. So i suppose a blessing that the starter failed when tied up or i could have been in a sticky situation along the way.

Another walk another day begs the question has the thaw begun? did i oversleep a few days during 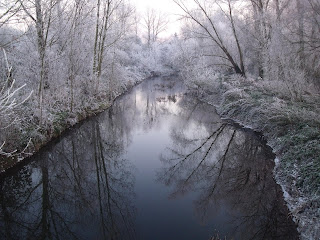 which tempretures rose and i can now move the boat from the block of ice cream that has held it so tightly for what seems months. No it`s just the R. Avon passing through Warwickshire on it`s way to the sea. 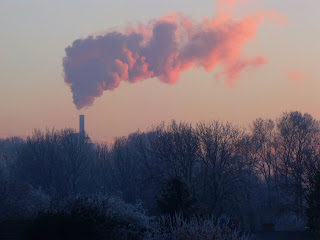 Big old chimmney on that boat, bet it`s warm in there.