DAY TRIP TO LONDON ON A TRAIN---YUK! 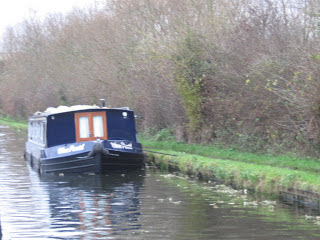 boat it must be Les D & Heidi on their newly launched "BLUE PEARL". No sign of you two being on board so we will have to meet another time. By the way Les the e mail is on the comments box & mine is 15a. 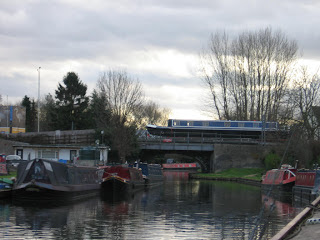 crossing the canal. One place for sure it wasn`t heading was the Earls Court Boat Show because as you can see in the picture below it consisted mainly of high priced yachts. 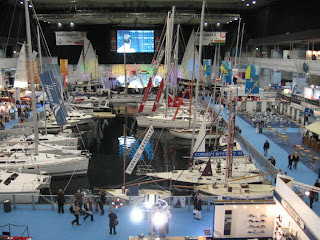 I decided to have a day out in London to visit the show so clutching my off peak travel card, off peak? even insisting i was in the peak of condition it was still £7.80, i bravely ventured onto the train. Now the first part of the journey to Baker St. was fine although part of the underground system the trains are quite large but changing onto other lines in particular the piccadilly the tunnells are smaller so of course are the trains, height wise that is. Noisy and stuffy with people sitting with faces like you get at the dentist, not used to this i`m a fresh air man. Did you know boaters do it breathing in fresh air.
Anyway i knew knew in my heart of hearts there wouldn`t be much in the way of canal boats and i was right, in fact just 5 inland waterway boats. One was a Hoeseasons holiday boat another a Trail-boat ( can be towed on a trailer waterway to waterway) so that left just 3 builders showing their wares. Disapointed but not surprised the idea was to have a day out so i had a good walk around and at least there were some sales people on stands such as Solar to chat to.
Now this event is publisised as a Boat Show so can anyone tell me why Bentley had 2 of their cars there and hot tubs were on display next to Armchairs that gave you a massage!
Anyway i met Tony Brooks who answers technical boat questions in Canal Boat magazine and made a good usefull contact on a Vetus dealer stand. NB Valerie has a Vetus engine below decks.
So all in all not a wasted day.

Anyone been watching the BBC programme £800 million station recently concluded on BBC2.
Having watched and enjoyed the story of how St Pancras Stn. was restored and transformed into the new terminus for Eurostar trains i couldn`t miss out on a visit on the way back to the boat.
St. Pancras Stn. was designed by William Barlow and building started in 1866. It has a roof of 689` in length, although this has now been extended in glass to accomadate the Eurostar trains, the height was 100` and the 243`span made it the largest enclosed space in the world, a record held for many years.
The basement of the station was opened up and now contains many big name retailers, M&S,
and Hamleys being two that spring to mind. Upstairs at platform level following Wm. Barlows 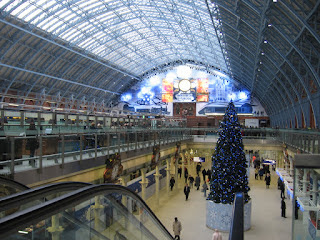 record largest enclosed space another record has been set by way of Europes longest Champagne bar. Above not a clear picture but if you enlarge it just above the escalator rail on the left part of it can be seen separated from the Eurostar train by a tall glass panel.
On Dec 9th First Capital Connect are relocating from Kings X Thameslink stn so St Pancras station looks to be very much a major London Termini. 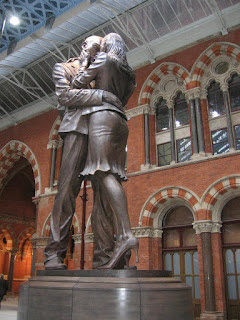 of the platforms is meant to become a meeting place for travellers, bit like `meet me under the clock at Victoria i`ll be wearing a carnation` well for a so called meeting place it`s a bit short of some comfortable seats in fact any seating would be nice.
Sir John Betjeman was mostly responsible for saving St. Pancras from demolition in the 1960`s and personally i`m glad because i think the new mixes in with the old very well.
So London-Paris 2hrs 15mins. I wonder how far the steam trains of the late 1800`s would have travelled in that time.

Breathing in fresh air? Thats absurd as boats in particular narrrowboats etc are worse polluters then other transportation due to the type of engine they use ie no catalytic converter etc

Bet the air around my boat is fresher than around your car.The engine in my boat is the same as fitted in a small Mitsubishi car. The difference is the canals are at most times away from the pollution of the streets and i don`t queue at lights etc or share my road with thousands of other polluters. A boat engine travels at very low revs so is not pumping out to much pollution.
So be honest the air along the canal must be fresher.

In spite of your observation that there are no seats by the meeting place statue, it is a very impressive looking piece.

Hi Annon
Yes i agree the whole site is impressive but as all the shops have yet to open perhaps in time some seating will be installed.

you just erode the banks with your wash and empty dirty water and more back into the system, not polluting "get a life man"

Have a read of the website below, it may inspire you to inject some life into your own website

Retirement with No Problem

Hi Annon
Only water from washing etc goes overboard, perfectly legal.
Don`t know what you mean by "and more" if you mean sewage this is all disposed of at proper sanitary stations along the canal system.
Who said i don`t cause pollution,every person on this earth does.Just think there are less boats than cars, lorries etc.
Me get a life, well thanks matey but i`ve got a great life can i scence envy?

Hi Annon
The website you list is published by a good friend of mine Sue.
It is a completly different type of blog so cannot help me to inject life into mine.
At the moment i am into the author Linda La Plant the reason being i like the way she writes so just to spell it out for you, seek an author you like and read it.

I know people enthuse about this station, but I have my reservations. It cost over 5 billion pounds to put this line in to Paris.. Plus, of course, the cost of restoring the station. That I don't begrudge, it is part of our history.

The trains may well be underused, and it is said that the use might be as little of one quarter of the capacity.

For sure, I am not a 'European Union' Supporter.. so can't see the need to visit Paris in 2hrs whatever minutes, MY money, being a tax payer, has saved just 20 minutes off that journey I believe! Sheeeeeeesh!

Solar Panels.. I am not sure. How long will it take to save enough on diesel to pay for the panels? Debateable! Anyway, our roof is covered in logs which saves about £8 a week in coal... oh minus the petrol to chop 'em up!

Oh By the way, Don't you think the canals need dredging badly? I am finding more and more that No Problem is eroding the banks because they are so shallow, I can't go slow enough not to cause a wash sometimes..

But also of course, the towpaths are becoming muddier and muddier as they are not maintained either. The mud washing into the canal from them is as bad as the mud coming out of my jeans after they been put in my washing machine!

Oh Sue you are taking a chance reading a lifeless blog and eroding the banks with your wash, polluting the canal with your washing machine...annon is not gonna like it. But something tells me you know that.
Yes i have today cut some logs a wonderful freebie apart from the tiny amount of petrol.
Be safe Sue.
Now go away and write 100 lines
"i will not read lifeless blogs"

There really are some sad people out there-what happened to 'live and let live'? Surely health and happiness are more important than whose blog is better than whose, and if you don't like one, stop reading it and find one you do like!

Also, speaking as a fellow boater, we aren't running 2 or 3 cars per household (we used to be guilty of that) we now use good old leg power and I'm sure there can't be any pollution in that! We produce all of our own electricity (by the natural source of wind power whenever possible)and I am fairly sure we are far more economical in our every day use of water.

I think it is time to let this arguement go, everyone is entitled to their own opinion but there is no need for it to get personal!

Gawd, I gotta get a life, I cant just sit here and write "i will not read lifeless blogs" 100 times sorry! :P

Hi Antinady
Welcome to the world of blogging. I think we`ve met along the way somewhere.
Now you`re a regular reader you can see how some try to wind me up but as you know it won`t work as i`m so laid back i sometimes fall over.