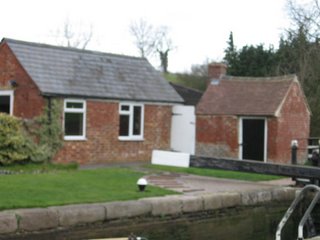 The body building next to the Nelson pub.
10am Friday last and the canal was again in water and the padlocks came off the gates. It was like being let out of prison, well i think it was not having had that experience i can only imagine the feeling, and so off we went stopping only at the marina to get a replacement gas bottle.
Started to go up the 7 locks leading to Long Buckby and on entering the 2nd noticed some very nice logs at the lockside begging me to take them, well can`t refuse free heat so as the boat rose in the lock on the roof they went. By the time we reached the last lock on this flight there had been quite a lot of boats moving down the flight.
Now we have just 3 miles and Braunston tunnel before we have to go down 6 locks into Braunston. Half way down is a pub called the Nelson that was actually a farm and next to it a small building that in days gone by was used to store salt and dead boaters awaiting burial. So if i go missing remember to check there first.
Managed to moor up in front of the Braunston Marina where they have on sale a narrowboat built in China and shipped over in a container. It was ok but nothing special certainly not as good as boats i have looked at from Poland, but no doubt the chinese will get better and flood the market with boats. Very sad that even our boat builders are facing competition from abroad and makes you wonder if in the future British Wateways will be in foreign hands.
So had a few days here and celebrated my 59th year on this planet and also it`s been 2 years since i did my 1st blog. Click MARCH 2005 on the left to read it.
This evening we have decided to cast off at 10.30 Wednesday as the weather shows this will be the best day till the w`end.
Posted by Les Biggs at Tuesday, March 20, 2007