The Anderton Boat lift gives access to the River Weaver 50` below the Trent & Mersey canal.
It was built in 1875 and still works much the same now as then. The main difference is that electricity now powers the rams.
Two water tanks, each containing 250 tons of water and two narrowboats, are supported on two one piece hydraulic rams.
Originally power was a steam engine driven pump, now electricity is the power source.
In 1908 the lift underwent major repairs and the hydraulic rams were replaced by gears, weights and pulleys and a lot of these are still in place today although not part of the lift operation.
The lift closed in 1983 because of corrosion and it was nearly 20 yrs later it was restored. Restoration took the form of re introducing hydraulic rams as originaly used but electric power to drive them.
Passage up and down the lift is free for narrowboats holding a B. Waterways licence. All you do is turn up and get allocated the next space or for £5 you can book a time.
Even if you are not on a boat you can take advatage of a trip boat that regularly makes the journey up and down, but you will have to pay.
The whole site with visitor centre containg exhibits and film shows telling the whole story is well worth a visit. 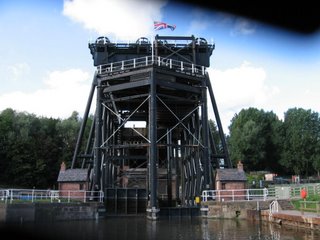 Anderton Boat Lift pictured from the R. Weaver. Quite a structure eh! 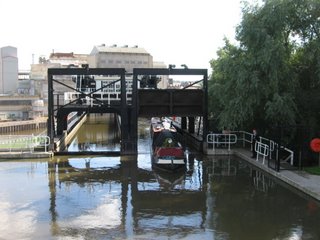 The entrance to the lift. First you enter beneath the guillotine gate you can see, this is then lowered and you are between the canal and the lift tank, a bit like entering the lion area at a drive in safari park, the gate in front of you is then raised and you enter the lift tank. Gate then lowers and you are in your own private bath tub ready to go down. 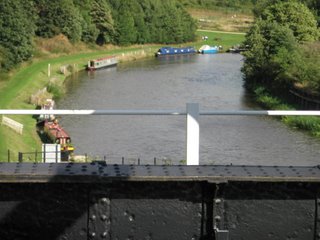 Looking down to the River Weaver from the tank as we decend. 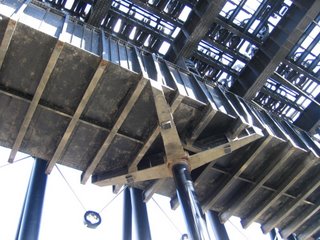 This is a view of the other tank on it`s way up, shows the hydraulic ram. 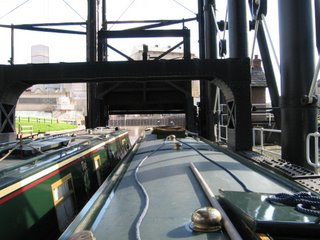 Two boats in the lift tank waiting to decend, NB VALERIE on the right.
Posted by Les Biggs at Monday, September 04, 2006

FOR ALL YOUR ESSENTIAL UNDERWEAR http://stores.ebay.co.uk/Essential-underwear-and-accesories

Hi Les,
Glad to see you made to the lift ok. looks like an expierience to say the least will fill you in on how we got on at IWA at Beale park when we meet up keep smiling
Regards Mark & Lorain P/Boro

Hi Mark/Lorain
Yes it was a great trip and no extra payment other than the boat licence.
Look forward to meeting up.
LES

I've been to the boat lift twice. Once about 3 years ago and once about a month or so ago. Much had changed in that time.

I wrote a review of the place after my original visit, which you can read here if you're interested. I actually preferred the place the first time as it was far less commercial.

Hello again Sharon
Yes i have read your review of the lift. So impressed am i that i would like to offer you the job of blog writer. I operate the boat you do the blog. Don`t tell me the other half is not impressed.
Thanks for your comments, all the best to you and yours.
LES
ps There is no charge NOW to use lift for holders of a BW licence.