Well this is the last blog of Chester a truly facinating city. Now as you look at this blog please give a thought for yours truly who at great hardship trudged around these taverns to get the pics and info. Never have i drunk so many coffee`s in one day!!!!!!!!!!!! 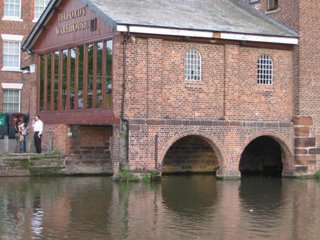 Telfords Warehouse built in 1790 by Thomas Telford. Boats would pass under the building to load and un-load. The building is now a bar/restaurant and care has been taken to preserve the inside, the focal point being the original crane in the centre of the bar. 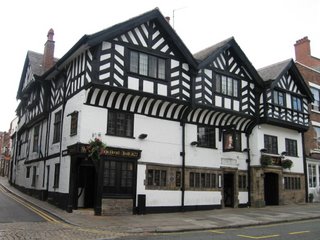 Ye Old Kings Head, timber framed and during renovation in 1930 a sword was discovered below the floor. 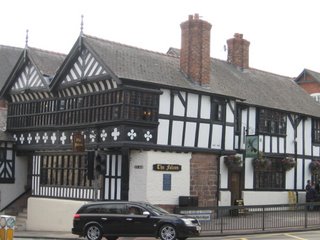 Falcon Inn, the surviving half of a larger medieval house that became a tavern in 1778. Inside stone pillars and the remains of an original medieval shop front can be seen. 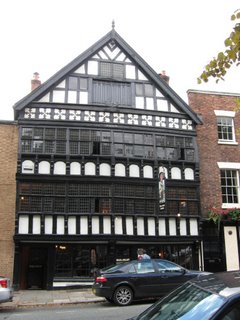 Bear & Billet, dating from 1664 and originally the town house of the Earls of Shrewsbury. The info i have is that it is said to have over 1,000 window panes. Well i have had a count and can see 70 frames each containing 25 panes of glass so i make it 1,750 just on the front. 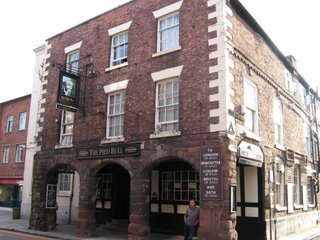 Pied Bull, once called Bull Mansion and was the residence of Chester`s recorder in1533. In the 18th century it was re fronted and became a coaching Inn. 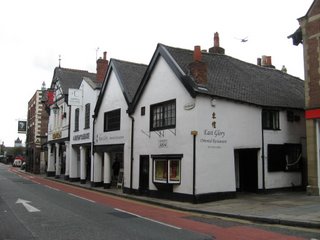 The Blue Bell, a timber framed building on record in 1540 as an Inn. It is now a restaurant and is the only medieval Inn within Chester. The small cabin on the right hand corner of the building was at one time used as a barber shop.
Posted by Les Biggs at Thursday, September 14, 2006

You poor sole,
so much trudging and so many taverns to visit just to keep us all informed you are as my Mum used to say "a little soldier"
very surprised that all the pics are in focus after that many coffee's funny way to spell it here it's spelt with a b
enjoyed the read keep up the great blog.

Many thanks for your support. I am a good little soldier or should it be sailor!
The photo`s have been good just a little digital camera that i got when i retired.Can`t do to much wrong, set it on auto and press the button.
LES

After all the taverns it's a good job it's digital, auto and easy to use LOL