I would like to wish everyone a merry christmas and a happy new year.
I am spending christmas day with my son & daughter in law Andy& Bev in Watford. On Boxing day i will be staying with my late wife`s sister who lives nearby.
Soon after New Year i hope to start moving again up the Gd. Union through the winter closures. Milton Keynes is the main obstacle as the canal is closed untill mid March.
Next years cruising will i hope include Wales & York so need to get through MK as soon as poss.
I have found the last few weeks boring as i am not one to stay moored in the same place for to long. Perhaps next year i might return south for christmas later or i am thinking of continuouse cruising somewhere on the system and travel back by train for christmas. Still as this is my first full winter afloat it is still a learning curve.
Have for the last few days been installing a double dinette that will also provide 2 extra berths. When the boat was fitted out i decided i would not have a dinette as i wanted to live with the space and be sure of what if anything i wanted in the available space. A timber yard near where i am moored supplied the veenered board and cut most to the size i wanted. The cushions i will have made up at a convenient location.
I will start blogging as soon as i start to move.
Posted by Les Biggs at Monday, December 25, 2006 13 comments: Links to this post

Been here at Brentford a few days now and will probably stay a week or so.
In 1790 the waterway route from London to birmingham was 230 miles but only 105 as the crow flys.
The Grand jct. Canal a 90 mile link from Brentford to Braunston was started in 1793 and would be a shorter way to Birmingham by linking to other canals.The Thames route to London was not ideal for narrowboats owing to tides dictating access. So in 1801 the Paddington Arm was opened and by 1820 the Regents Canal opened up right into Regent Dock now known as Limehouse.
Narrowboats at Brentford loaded cargoes from the larger river boats and were Guaged and charged according to the weight and cargo before entering the canal system on their way north.
The cargoes carried were timber, steele, paper, sand, coffee beans, sugar etc.
Guaging was done by resting a tube containing a float on the boats gunwale. The float would rise pushing a measure up inside the tube showing how low in the water the boat was. From this measure they used the Guaging book that contained measures of all boats. A Toll/Fee of pence per mile would then be levied based on type and weight of cargo. The boat could then exit the lock to make its 4 day trip to Birmingham. 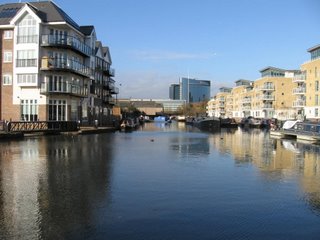 This is the Moorings at Brentford. Guaging Locks to the left. Residential moorings on the right. On the left is the BW office and the facilities building. The building contains washing machines, tumble dryers, toilets, showers, elsan & rubbish disposal. All in prestine condition and available to boaters using the BW key. There are also 2 electric hook ups outside the office. I am moored up on the left breasted up. 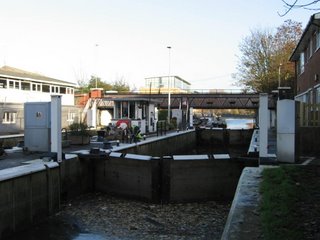 After passing through the Guaging Locks and passing under Brentford High St you are at Thames Lock. On going through this lock you are soon out on the Thames that can be seen in the distance under the bridge. 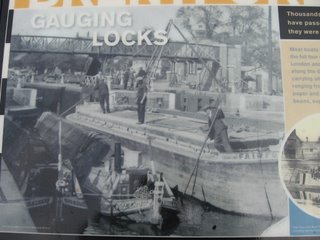 A view of the Guaging Locks in their heyday. Notice how low in the water the 2 narrowboats are. Perhaps just loaded ready for entry into the locks and Guaging or waiting to un-load a cargo from industry in the midlands to be exported from London Docks. Either way it means the family living and working on board are getting an income. 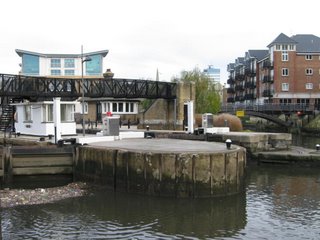 The Guaging locks today. Gone the days of cargoes being moved from Thames Barge to Narrowboat. Now just Narrowboats coming and going via Old Father Thames to perhaps the Kennet & Avon or maybe the South Oxford Canals. 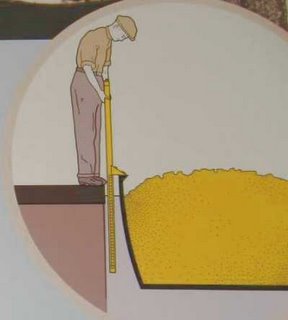 A boat being Guaged. Took a pic of this exhibit in the Toll Office that has been preserved and is only open now and again mainly for schools but the lovely lady in the BW office opened up for me.
Posted by Les Biggs at Friday, December 01, 2006 4 comments: Links to this post 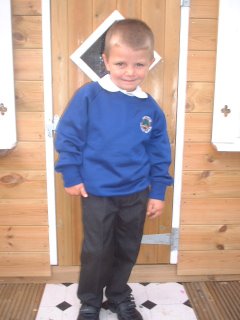