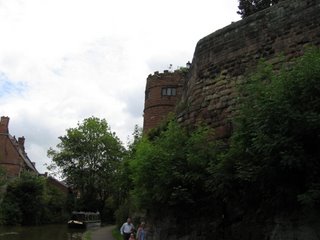 Having passed close by the town, which seemed a little bit busy and noisy for mooring, we head on to a mooring further on. Upon this tower it is said King Charles 1st stood and watched his army defeated on Rowton Moor. It is now we see the walls surrounding Chester, a fortress built by the romans nearly 2,000 yrs ago. The walk around the walls is 2 miles long. 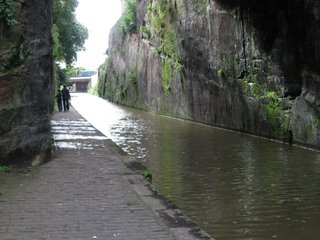 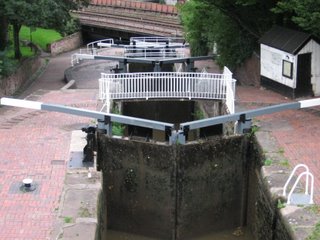 Northgate locks cut out of solid sandstone. Originally there were 5 locks here but was reduced to the present 3 in 1790`s 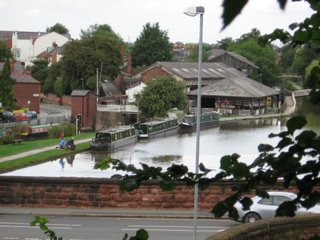 Out of the locks and a sharp right turn brings us to Tower Wharf. This will be home for 2/3 days. To the left is the arm leading down to the River DEE. 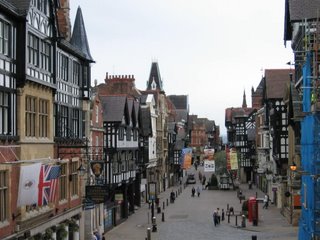 A view down one of Chesters many streets and by the look of some of the buildings this is not your usual high street. 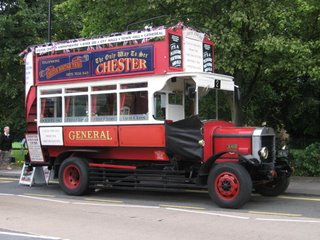 OK lets do the tourist bit from the top deck.
To be continued
Posted by Les Biggs at Monday, September 11, 2006

Thnks for this, it bought back some wonderful memories. I stayed in Chester for a couple of nights before starting out on a trip on the Llangollen canal many years ago. I seem to remember we started of at a place called Bunbury? I think thats what it was called then carried on down the main canal (soorry cannot remember the name of that one) before turning right ont o the Llangollen. It was a wonderful trip.

Oh I have done that Chester route 3 times now on a hire boat. Last time there was a problem with the Northgate staircase lock. Some idiot had come up it and hadn't filled the cha,mbers correctly so as a consequence another boat and I got stuck on the bottom going down. We added more water, sailed in the middle chamber then the gate got jammed open plus the paddle on the first chamber looked down but was broken, so me and this guy got stuck in the middle chamber with the gate jammed slightly open with water rushing through. We sailed into that lock at 4.30pm and got out at 7pm. Once I range British Waterways, they were fantastic and came out within half an hour. I might blog about that actually. Sorry this comment is so big

I have to laugh though. I live a 40 minute drive from Chester, but it takes a 2 day cruise to get there. But thats the point isn't it?

hi knowley...
Bunbury is on the Trent&Mersey canal. Came through on the way to chester. There was a hire boat yard next to the double staircase lock, was that the one you hired from? Can you remember the boats name? As i pass back there on my way south for winter will try and get a pic for you on the blog.
LES

Hi Carol
Yes BW are pretty good at attending problems such as locks etc. Shame it cost you part of your hols. In my situation if there is a delay it does not matter as i have the rest of my life afloat. During the wet August i felt sorry for the hire boats i saw cruising in rain as they had to be wherever at a certain time, me i don`t do standing on the back in the rain, there`s always t`morrow or next day.
LES

Hi Maureen
Yes you must it is a wonderful place. So much history, more than i could blog, well i could but the blog is just a small look at what i am doing.
LES

Les
Bunbury is on the Shroppie!! You are chilled out aren't you? The guy that runs that hire base is a smashing bloke. Gave us a pump out with the cheeriest of smiles and as you know, THAT is not a pleasant job. :-)