Sorry got the pics in wrong order........again
Life on board a working boat must have been hard not just the long hours but the cramped living space. As you can see in the pics, and that space is 8` long, yes 8`.
Of course many of the boats would pull a butty(un-powered boat) that would be steered by the wife and often the family`s children. The butty also had a cabin which was used to sleep some of the children of the often large family`s.
Often when the inspector was due a visit to make sure the number of children on board was not above the company limit the children would be passed to another boat untill he had gone. 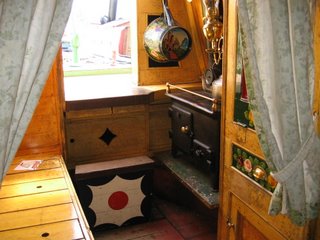 Looking back from the double bed to the door on the left just room for a child to sleep. 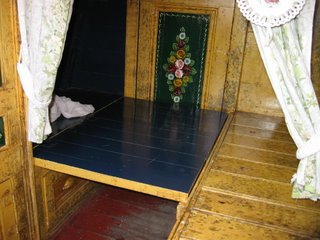 The flap in position for double bed. 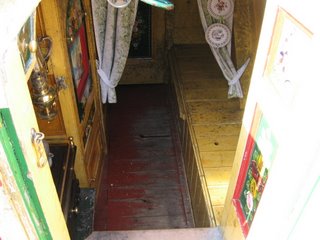 The view of the living space in `FERRET`, on the left is the stove for cooking (coal fired), next is a cuboard that has a pull down flap for a table. Behind the flap is storage space and also at the bottom drawers. The oil lamp is the only illumination, it is hinged to cast light through the cabin.
Straight ahead can be seen the decorated doorway that led into the engine room.
A flap came down and made a double berth crossways. 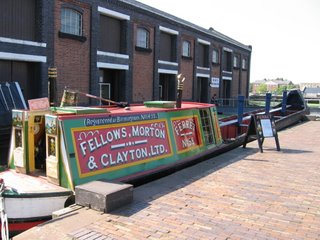 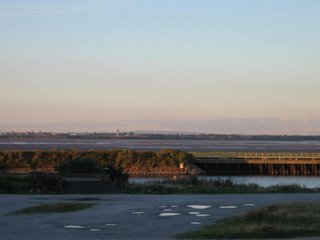 View from boat museum. In the foreground the ship canal then the R. Mersey. Looking across just left of centre is the control tower of Liverpool`s `John Lennon` airport and to the left of that i can see the orange tail on an easyjet plane.
Must go to L`pool, will jump the train, can`t turn south and not pay a visit.
Posted by Les Biggs at Monday, September 25, 2006