Leaving Chester an 8 mile lock free cruise brings us to Ellesmere Port that links to the Manchester Ship Canal although access has to be arranged with both BW and the Ship Canal for access onto the MSC.
The canal arrived here in the 1790`s and major growth came to Ellesmere Port with the opening of the M Ship Canal in 1894.
Today this jct. is the home of the boat museum that has the largest collection of floating canal craft. A lot of the original buildings are preserved and house a very intersting collection of canal memrabelia. ( you know the word) 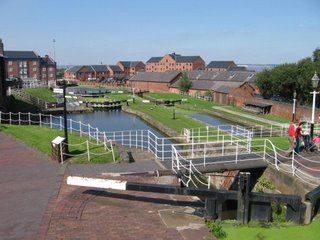 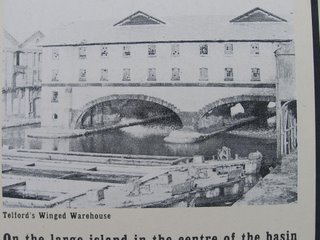 Telfords Arched warehouse spanning the lower basin. This is a picture i took of a photo in the museum as sadly it was burnt down by hooligans if i remember rightly in the 70`s. All that remains are the 2 supporting strips that now serve as moorings for visitors and some larger boats on display.
The warehouse to the left has now gone and a Holiday Inn hotel now replaces it. 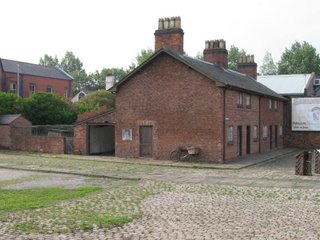 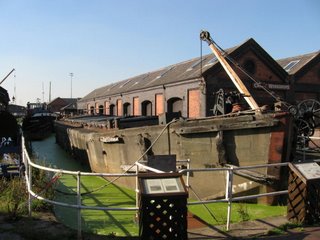 This barge is made not of wood or steele but concrete. During WW2 many of these were made not by boat builders but but building company`s. They are pre-cast concrete panels bolted and cemented together to form the hull. Houses were also constructed using the same system and many hundreds still exist in Ellesmere Port today.
The arm within the museum that this barge is displayed is called the Victoria Arm. In the days of woking boats it was known as the sleepy arm because it was a quiet part of the port and expectant mums could moor here and await the birth of their babies. 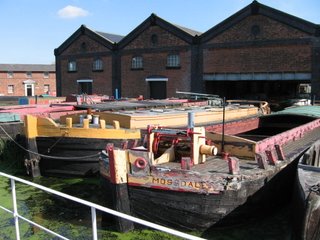 Some of the many wooden boats afloat in the upper basin hopefully to be restored as money becomes available.

Les
Looks like you had a lovely day for it. We went there a few weeks ago (By car, sadly) I think it's really good value for money. Any plans to cruise the ship canal?

It was always mine and Mrs Knowley's dream to buy a canal boat to retire on. However, things have now changed workwise and we are in the process of applying for emigration to Australia.

Having seen this post, I might have to tell her I've changed my mind and go for the original option!!

Hi Carol
Yes would like to do the ship canal. Met someone at a lock on the weaver waiting to enter the ship canal on a trip to Ellesmere. Seems you have to meet a few rules etc and pay a fee but will do this when i have a few more miles under my belt. Still learning on the cut.
LES

Hi Knowley
You must do what you BOTH want. Only get one life so do it together and enjoy.
Look on the bright side you can join the others in auz who read the blog.
LES

Les
Yes I think getting some miles under your belt would be a good idea. I am close to the Shroppie when I am home at weekends. I will keep a look out for you! Thinking of Ownerships for the time being, too long till I retire!!
Knowley, you and the Mrs can always retire back to the u.k and buy a boat!!