Some 4 miles along the Trent & Mersey from the jct. with the Caldon canal you come to Harecastle Tunnel. This tunnel is almost 2 miles long and is not as wide as other tunnels on the canal system and so it`s controlled by a tunnel keeper at each end. A maximum of 8 boats are allowed through north and the same can then go south once they emerge.
The water colour in this area for some distance both sides of the tunnel is caused by the ironstone mineworkings that are present all over the hill above the tunnel. The drainage from these mines causes the brown soupy colour.
There are actually 3 tunnels through the hill. The first was finished in 1777 . A second was built, to help speed boats through the tunnel as all the boats had to be legged through while the horses were walked over the hill, this was finished in 1827.
The 3rd tunnel was some 40` above the canal tunnels and was for a railway line. Now Following the closure of the original tunnel through subsidence and the re-routing of the railway only one tunnel is useable.
After exiting the tunnel the branch to the Macclesfield canal leaves to the left and as the Trent and Mersey drops down through 2 locks the Macclesfield canal crosses over the top of us. Just like a road flyover.
This area is Kidsgrove and there is a large Tesco 5 mins walk from the canal so an overnight stop followed by breakfast and seriouse re - stocking at Tesco was captains orders. OK so i am the captain, to tell the crew i just look in the mirror.
About 4 miles on is Hassall Green and a 17c pub called the Romping Donkey, i did ask but no one knew why. What i can tell you is they do a fab sunday roast, carvery style and a few pints after who wants to move after that so an o`night stop is order of the day. 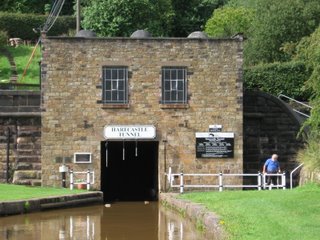 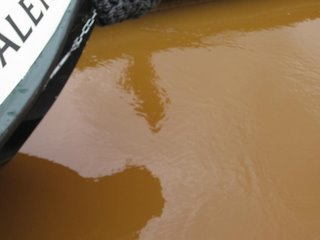 The odd colour of water 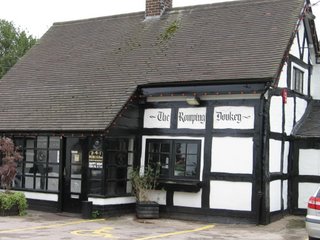 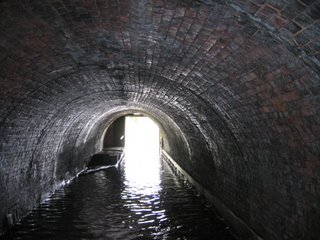 Looking back at the tunnel entrance
Posted by Les Biggs at Tuesday, August 29, 2006

Some nice pics Les... scarey stuff Harecastel Tunnel, it's ok in convoy unless you are behind a smokey old boat.... They close the southern doors behind you and put the fans on!

I am hearing on the towpath telegraph that you are heading for Anderton Lift!

So, is the 'Towpath Telegraph' telling me the right thing?

Hi SUE
You just don`t like tunnels do you,personaly i love em.
Yes those fans made me think a train was using another tunnel for a mo, but then i rembered the fans.
Yes as i write have just today come back up from the Weaver via the lift having spent a week on what seemed like going to sea.Those locks are so big.
Will do next 2 blogs on lift & weaver.
Be safe hi to all
LES

The last time I did the Anderton Life was errrrrrrr a long time ago, in fact it was before it was closed some time in the 70s..

Glad you enjoyed that, and yes the locks are a bit big.. but wait till you go beyond Leeds northwards..blimey you will have to do a lot of walking along lock edges singlehanded!!

Having only been on one canal boat holiday in my life, I've never been through a tunnel but there's another holiday coming up next year so who knows, maybe a tunnel will be on the agenda. I'd certainly love to try one.

Hi Sharon
WELCOME
Where are you holidaying next year?
If no tunnels on your route we can get one put in for you.
les

Hi Les, Ive Just red your blog and thanks for a very interesting read. i am doing the same as you have. (my house has just gone on the market). You never know, one day we might just come across one another. i'll let you know who i am, and i'll say hi. All the very best for the future m8.