The Caldon canal a branch of the Trent & Merseywas opened in 1779 to transport limestone from the quarries Froghall.
The canal was owned from the 1840`s by the North Staffordshire Railway as was the railway to Macclesfield but by 1988 under British Rail the last stretch of line closed.
By 1996 a group of railway enthusiasts had started running a steam hauled passenger service between Cheddleton & Froghall, a return journey of some 10 miles.
Now as it`s my mate Bills birthday and like me he is a steam train buff we will have a few extra pics, and also Kevin must be looking in. DMRC rules. 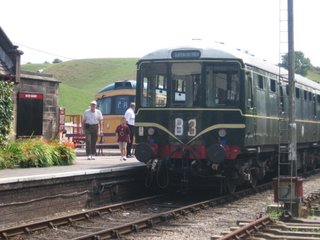 Steam trains only run on a Wednesday and all w`end. This diesel unit runs at all other times. 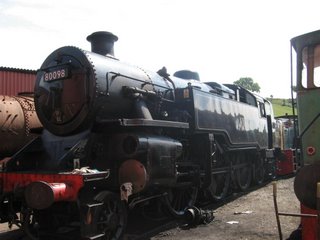 This is a loco inside the shed area udergoing repair. 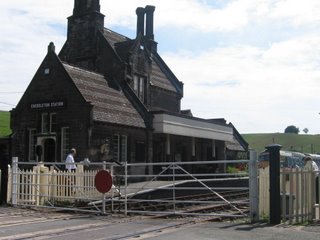 This is Cheddleton stn. headquaters of the Churnet Valley Railway and the site of the engine shed and carriage & wagon sidings. 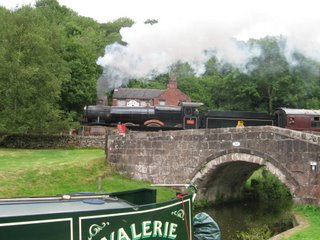 A steam hauled passenger train having just left Consall stn. has crossed the canal and is passing the Black Lion pub and that`s my boat NB VALERIE in the picture as well. 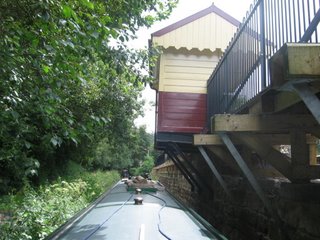 This shows the narrowness of the canal as i pass under the overhanging platform and more so the waiting room of Consall Station.
Posted by Les Biggs at Friday, August 25, 2006

We were there last year but did not go through the tunnel! We are on the River Great Ouse near St Neots.

Hi Chas/Ann
I remember posting a comment on your blog, i think when you were going past consal stn. on the caldon. It showed what i thought was a kingfisher at the bottom of the picture but it turned out to be your tiller pin.
Be safe hope we meet soon.
LES