ON DOWN TO UXBRIDGE 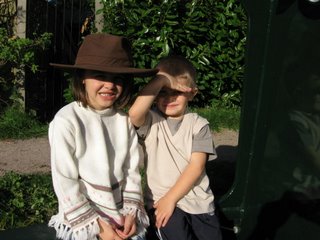 Now is Jack saluting me as captain or is the sun in his eyes. 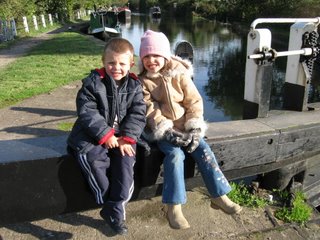 After the fireworks and a good nights sleep my crew Jordan & Jack are waiting for the lock to fill. It was a nice pleasent day for our mini-cruise from Croxley to Rickmansworth just 3 locks and almost as many miles but the two of them loved it. OK I DID AS WELL 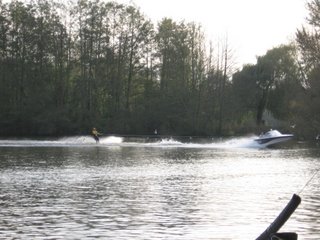 Water skiers at Rickmansworth Aquadrome which is right alongside the Grand Union canal. The Grandchildren enjoyed watching this while we waited for mum&dad to arrive.

This barge operated by` Land & Water` carries gravel between Denham and West Drayton. Also the narrowboat Arundel operates on the same run but at the present time it is in dry dock in the yard to the right of the picture so i have no picture of it.
Nice to see a narrowboat working again even if only over a short distance.
The Land & Water Co. say they move 60.000 Tonnes per year saving some 6.000 lorry movements. 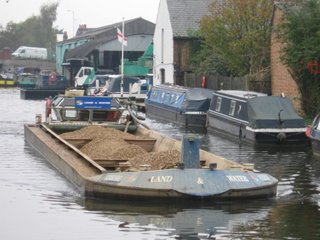 Metropolitan Police divers at Uxbridge. These divers are part of a team of 11 and are based at Wapping in east London. They cover the area within the M25 but also go all over the country if a Met Police case is involved.
They told me it was just a practice session but as they are so far from base and have passed many sections of waterways to get here i am not so sure.
The dives are strictly recorded, as when Firefighters enter a buiding with breathing gear on, each diver is connected by an air line fed from the bank by another diver and time in water and air used is noted. A rope is moved along a small amount each dive and the divers work from each side using only their hands to feel for anything on the bottom. The silt they disturb while searching results in zero visability. 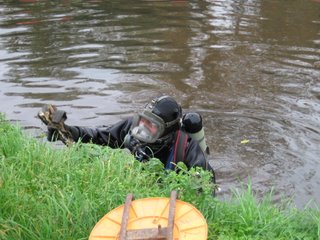 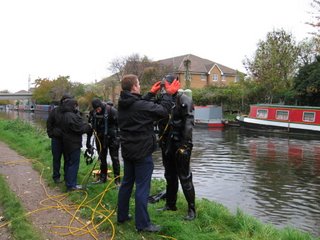 Hi kids
Give it time. Bet when they are a little older they will want to spend some summer holidays aboard. Untill then few days here and there will be great.
See you all at the party.
DAD

Great blog. I love the photos. Thanks for sharing!
ttfn Jane