IN THE BASIN AND IN THE PARK

Paddington Basin is surrounded by private land owned by Paddington Development Corporation Ltd. and is operated by them jointly with British Waterways. There is a strict 7 day mooring restriction and notices all around plus the welcome letter you recieve on arrival state that overstaying incurs a £25 per day charge. No return within 7 days. This does mean of course you could cruise down into the city of london for a week and stop off in the basin on the way back upto the Grand Union and all points north.
It`s been nice to be back in my birthplace, so much has changed and again hasen`t. The hospital i was born has itself given birth to flats. In an estate agents window i saw a tiny 2 up 2 down on an estate originally owned by the church and then Westminster Council priced at £350,000. Gulp! That house had a front garden that i could just fit my motorbike in and the back garden was not much bigger. When i was a kid we had an outside loo till the landlords added a small extension on the back giving us a bathroom inside. That was when the tin bath became redundant. Happy days and it hasn`t done me any harm.
Had plenty of walks around the area but the best was a walk around Hyde Park. A few pics today and next time i will show you squirrel, horses, ferrets ! and of course Hyde Parks famouse chatters. 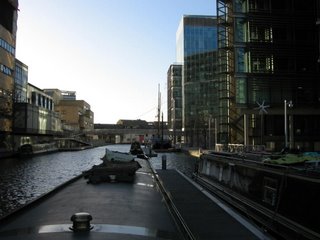 Looking back to the Basin entrance from our mooring. 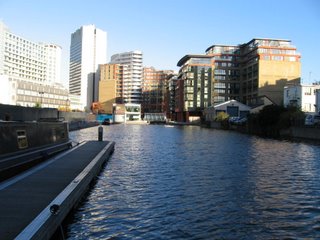 Looking towards the end of the basin from our mooring. 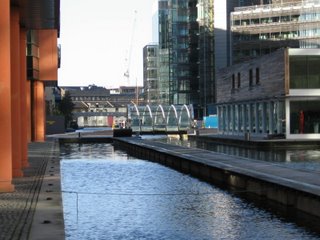 A view of the basin from the end of navigation, Praed St and Edgeware Road are just 300 yds behind me as i take this pic. 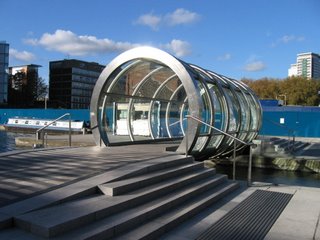 One of several fancy bridges crossing the basin. 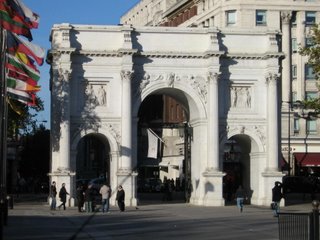 Marble Arch stands at the jct. of Edgeware Road & Oxford Street. It was at one time an entrance to the Hyde park but road layout alterations have now left it as an island, London traffic hurrying past on all sides.
Designed in 1828 for the main entrance to Buckingham Palace - home to a family that once owned NB Brittannia - it was moved here in 1851 when Buck Hse was extended. 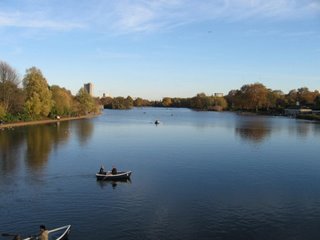 Serpentine lake fits nicely into the 350acres of Hyde Park and provides pleasure to visitors with row boat hire, lakeside restaurants and an abundance of wildlife. 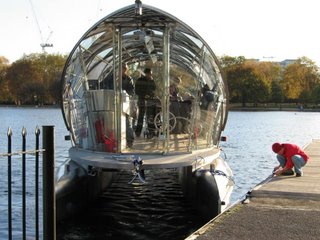 The solar powered trip boat that will take visitors around serpentine lake in Hyde Park. On the roof of the glass cabin are are 27 curved glass solar panels creating an output of over 2kw. The power is stored below decks in batteries from which the electric motor powers the propellers.
Posted by Les Biggs at Wednesday, November 22, 2006

Sorry you have lost me.
"and in the dark" ?
The heading is In the basin and in the PARK
or am i missing something.