After a week or so at Uxbridge we all decided to move on and head for Paddington Basin. Now as getting up early is not top of our favourites list we had an overnight stop at Bulls Bridge near Hayes. It was here at the jct. of the Paddington Arm that workboats would moor stern in waiting for orders to load at either Brentford or London as both gave access to the R. Thames and therefore loads from around the globe. Now sadly it is a large Tesco store and all that remains of the past is a dry dock.
The Nestle` factory is in Hayes just before Bulls Brdg. nice smell as you drift past.
Certainly seen some different boats as we move along the canals. The caravan body seems a good idea as it saves fitting out a shell. Further on there was a van body removed from it`s chassis and used as the living quarters like the caravan.
The nice thing about life on the cut is the close up view of the changing seasons. Now with autumn all the leaves on trees and bushes changing colour before dropping off ready for the winter hibernation. Before long, time seems to pass quickly on the cut, the buds will again give way to new foilage and another display of colour. When you leave the rat race of work and land living you really do notice so much more of what`s going on around you. Looking forward to spring and all the new born wildlife on the water and land come to that, saw a calf born in a field canalside this year.
Stopped off on the Aqauduct that crosses the N. Circular Road. This was where for 20yrs before i retired that i spent day in day out delivering. Looking down at the traffic it all came flooding back. Seems a lifetime but it was just 11 months ago.
Further down the Paddington Arm we passed the new Wharf just completed that will process waste, the majority of which to comply with planning consent must arrive and depart by rail or water.
So into the Paddington Basin and this maximum 7 day mooring will give me a chance to get a train to Leicester to see my son Kevin who is farming so i don`t get to see him to often.
Cor if you could smell what i can you would understand my ending the blog here. It`s a beef casserole that has been slowly cooking all afternoon and the smell has just made me realise how hungry i am after walking for 5 hours in and around Hyde Park, but more of that next time. 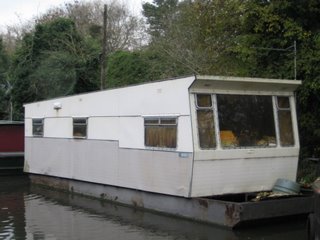 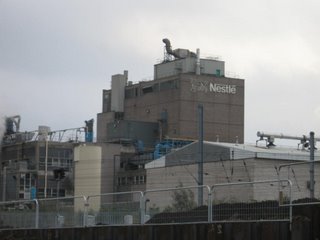 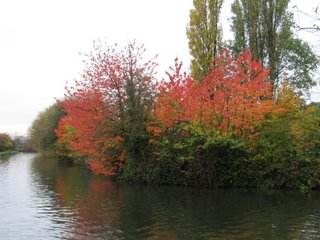 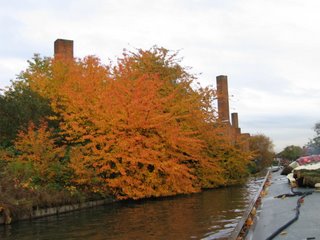 Autumn changes the view and at such a slow pace more time to enjoy it. 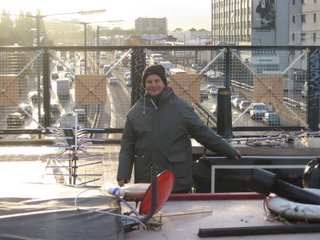 From the Aquaduct, check out that traffic behind me. 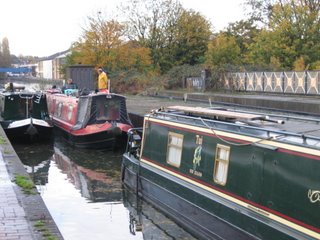 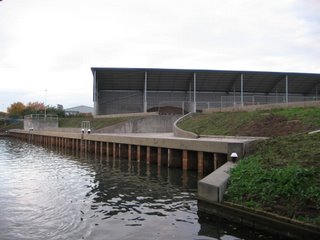 The new Wharf at Willesden 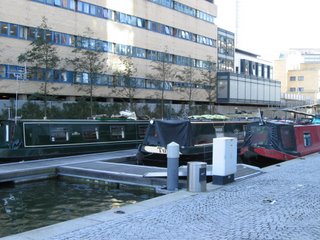 Here we are moored in Paddington Basin, just 5mins walk to the station and 15mins to Marble Arch and Oxford St.
Posted by Les Biggs at Sunday, November 19, 2006

I can see you from my office window :-) You shoud try being into canals and sit watching the boats go by from your desk - a mix of frustrating and interesting. You are the first canal boat blg that I have seen. Thanks for the photo of the North Circular - never relised that was where the canal went across. Julian

HI JULIAN
You should have come down for a tea/coffee. Leaving Thurs 10am but if you see me about by then please say hi.
If you follow the link on my page to (left side) NO PROBLEM that will take you to a friends site and from there you can link to others and on to more. Just bookmark as you go and you will get a collection to follow.
LES