"The road to recovery will not always be easy, but I will take it one day at a time, focusing on the moments I've dreamed about for so long." ~Amanda Lindhout, Canadian humanitarian and journalist

At long last Les and I are really cruising again! We've been immensely fortunate to have a slow, graceful transition from Les' recovery in the marina to life back out on the towpath, catching up with friends, other boaters and blog readers.
We've had some wonderful moments with Mike Griffin, touring some of the interesting places around Cow Roast marina, where Hertfordshire meets Buckinghamshire.
Mike took us along a typical country road--winding up and down hills and around tight curves with what seemed to me to be one single lane hugged closely on both sides of the track by trees and shrubs. Every time a car approached in the opposite direction I just had to shut my eyes tight and say to myself "don't look Ethel!" While the road appeared ordinary, it was a place of recent historical distinction. As we climbed Aston Hill in the early morning cold, Mike told us this very piece of highway was once part of a local hillclimb--a short sprint car race tearing around the tight curves and up the short, steep hills, in which a young man named Lionel Martin raced his prototype car in 1914.
"Aston Hill, part of Lord Rothschild's Estate at Aston Clinton was a renowned motoring venue. Lionel Martin and Robert Bamford were early racers at Aston Clinton, and had set up a small business selling and servicing cars in West London in 1913 specialising in Singers. Lionel Martin made his first ascent of the hill in a tuned Singer on 4th, April, 1914. Bamford’s early departure from the partnership left Martin with the need for a new name for his first car, created by fitting a four-cylinder Coventry-Simplex engine to the chassis of a 1908 Isotta-Fraschini. His success, achieved at the Aston-Clinton Hill Climb course in the prototype car provided the ideal name, and thus the marque of Aston-Martin was born." (Rothschild Archives. https://www.rothschildarchive.org/exhibitions/motoring_history/the_aston_hill_climb; accessed on 02/22/15) Yes indeedy, 007's favorite car was developed from the protype race car Lionel Martin raced on the Aston Hillclimb, taking its iconic name from its creator. One can pull into the car park at Wendover Woods to stop and read the plaque mounted there.
Prior 1923, this event became a classic in its twenty years of existence. According to the Aston Hillclimb web page the original start-line was 20 yards from the junction of the now A4011; the finish-line level with the house at the top of the hill and the original Course length was 3/4 mile in length which was later reduced to 1000 yards. (http://ox.mx5oc.co.uk/events/AstonHill/Aston_Hill.htm; accessed on 02/22/15.)


On into the village of Wendover we drove as the sun came out to soften the crisp edges of the winter cold. It turns out Anne Boleyn's father was once the Mayor of Aylesbury and several pieces of property came down to Anne from her Paternal grandmother's side of the family, including a piece of property on which a series of small thatched cottages in Wendover were built and are still known as the Anne Boleyn Cottages. (Aylesbury, Walton and Wendover Road Conservation Area document accessed 02/22/1; https://www.aylesburyvaledc.gov.uk/GetAsset.aspx?id...) This seems to fly in the face of popular history which suggests the cottages were given to Anne as a gift from Henry VIII however the first mention of them in any official records is around 1630. 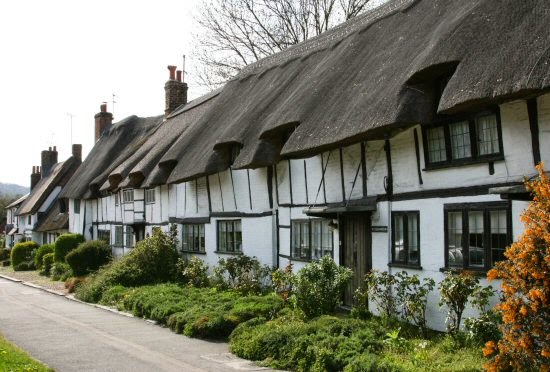 Here is a reminiscence by Peter Osbourne, whose sister Daphne once lived in one of these cottages:
My late Sister Daphne Hemmings owned No 3 Coldharbour Cottage. She
passed it on to her son Jimmy Hemmings. I have fond memories of visiting
her and staying awhile in these fascinating dwellings. You wouldn't want to be
six-foot plus with the low doorways plus the low beams, you would crack your
head on the oak beams. If anyone passed away upstairs you would have to be
lowered through a trapdoor located in the front bedroom in line with the front
door. (From a Memory of Wendover, December 19th, 2011, Francis Frith
Photography.)

We said a sweet goodbye to Cow Roast and the wonderful community of boaters there, and cruised about three miles through the Tring cutting to moor up just before the Bulbourne water point where we stayed for about eight days while waiting for some repairs to take place to the broken lock gate at the top of the Marsworth flight. This provided us with an opportunity to catch several buses and visit our daughter-in-law and grandsons in Thame, enjoy an excellent meal at the Grand Junction Arms Pub as our Valentine's celebration/monthly date night, and enjoy spending time with Carol and George on WB Still Rockin and their amazing four footed family member Molly. We walked down the lock flight to see the repairs being made to the lock gate, and continued on down the flight to the junction of the Grand Union and the Aylebsury Arm where we found Tom and Jan on NB Waiouru!
At last we met the "other" famous Kiwis (the first being Marilyn and Dave on NB Waka Huia). It was terrific to catch up, check out their boat (I love seeing other people's boats. I always come away with inspirational ideas for ours!) Tom's legendary quick wit was well on display and I welcomed getting a chance to know Jan, whose straight forward, no-nonsense attitude and sharp wit echoes my own. Les and I owe a huge thanks to you both for your ongoing support of us throughout the last year.
Carol and I ditched our hubbies for a women's day out in Tring. We enjoyed a leisurely lunch at Francesco's Italian diner, and visited several lovely shops: Fancy That (and I did--I did!) an incredible gift shop where I wisely left behind most of the shop (where would I put it all on a narrow boat?), for a foray into Marks & Spencer for a few bits and bobs for dinner and on to Metcalfe & Sons cookware shop where Carol and I each purchased much wanted kitchen items. While I love Les and enjoy sharing our life together, I sorely miss the companionship of my women friends. Time spent indulging in a wee bit of retail therapy with Carol was lovely indeed. Thank you girlfriend!!
We spent a few more days visiting with George and Carol, and I made a friend in their Patterdale Terrier Molly.  There is defo an enlightened soul in that dog. She's whip smart, with a non-nonsense attitude toward people and a great sense of humor. Top all that off with that adorable tail and well...I felt honored when Moll accepted me as a person of trust. 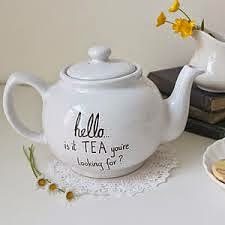 As Les and I cruised down the Marsworth Flight we passed nb Etive (Sewing seams naturally) and I got a shout out from Mary Anne who walked down the flight to visit and had a cuppa with Les, George, Carol and myself. Another lovely woman on a boat!! It was great to catch up with you Mary Anne.
We spent another week moored up at Startops End reservoir where blog follower and walking enthusiast Daryl from Watford caught up with us. Sadly, Les had gone into Tring for a prescription and missed Daryl's visit and I was stuck in the middle of some serious boat cleaning (I can only do serious boat cleaning when Les is not under my feet). Next time Daryl, we will invite you in for a cuppa.
Shortly after Daryl said goodbye, Les returned and fellow boating enthusiast and blog reader Dave Winter dropped by. Check out his blog Brassiclint. Dave loves boats and photography and his pictures are terrific.  Later that same afternoon our friend Robert on WB Wind in the Willows came by with his sister Maria and time got away from us as we sat and conversed about the universe.
Soon enough it was time for us to cruise!! We had such a wonderful time getting to know George and Carol. Thank you for your hospitality and friendship; for afternoon cups of tea and evening glasses of vino; for great conversation and good craic.
With George's help,  Les and I cruised off down the bottom lock of the Marsworth flight to the water point where we filled up with water and picked up our substantial Tesco grocery delivery while gongoozlers watched in amusement from the bridge above us. Off we went into the early afternoon sunshine and cold, raw weather. As we went I realized that the stress of the last six months has caught up with me. We were not expecting the abrupt diagnosis last August. All I could do was suck in a deep breath and hit the ground running in crisis mode. I am finally able to let that breath out now, but my body is tired and I feel wretchedly unwell. All I want to do is sleep and cruise.
Two more locks and we called it quits for the day. The temperature was dropping rapidly. We spotted two mountjack deer in the adjacent field with a swan sitting in the grass not too far away making this a good spot to settle in for the rough weather of the next few days. Jules Fuels will be along in a day or so to top up our diesel tank and load bags of coal on our roof.
In the evening we were graced with a beautiful view of the pale sliver of moon smiling in the nighttime sky which was dimpled with the shining planets Venus and Uranus in conjunction. It is for days and nights like this that we live this life. 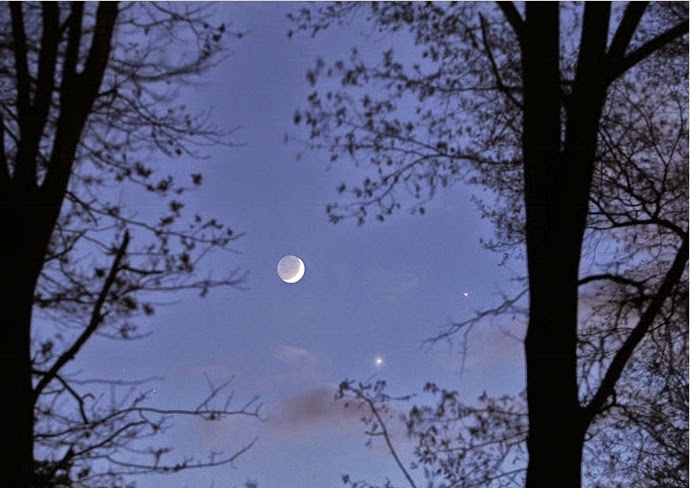 Lovely to see you two out and about again! Lovely post as always.
Photos are fab, the last one my favourite as it's magical!

Made me teary, dammit, Jaq!
Love and big hugs to you both - have emailed too. Mxxoo PS Very pleased the be the FIRST famous Kiwis ...

Hi Deb,
Thanks darlin. It is grand to be moving again. Hopefully, we will make it up to your neck of the woods this year!!
JaqXX

Hi Marilyn,
I'll see your email and raise you one! Cannot wait until you and D are back on the cut.
Love JaqXX

The name is Bond, James Bond and I pilot an Aston-Martin.

I've just stumbled across your blog and been reading about your time in the Tring/Marsworth area. It is where I grew up, and my parents owned a boat that had it's mooring near to Slapton, so it was lovely to see the area viewed through your eyes and learn about the new developments on the cut.
Thank you