In the Company of Friends

"Good company and good discourse are the very sinews of virtue." ~Izaak Walton
It's been awhile since I posted anything due to the start of spring semester at the University for which I instruct online courses.  Due to a change of online course management systems the last three weeks have been like the maiden voyage of the Titanic. Now that I've caught up and the wrinkles are smoothed out, I can take a breath and catch up with all of you lovely folks who follow our blog.
While we have been sitting in the marina making the most of the opportunity for Les to heal, we've not been hibernating--Oh no! We've become social butterflies, flitting from one fete to another, dinner with friends, birthday celebrations, date nights out--life has been a whirlwind of activity! 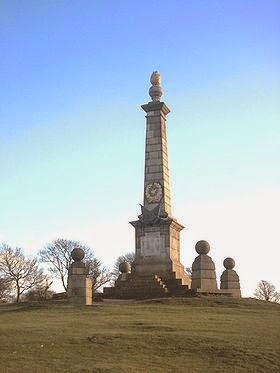 After posting on the blog about going stir crazy, our friend Mike Griffin (NB Albion) came by one week day morning and took us on a tour of the small hamlets and back country roads of Bucks (Buckinghamshire) county. We enjoyed a delightful bit of local history and stories about Mike's childhood in nearby Dudswell.
He took us for a walk up Coombe Hill in the Chilterns overlooking the Ayelsbury Vale, with breathtaking views of two canal arms: the Aylesbury and the Wendover. We also had a clear view of Chequers--the country home of the British Prime Minister (Americans may compare it with Camp David). At the summit is a memorial to local men who fell during the Boer war. 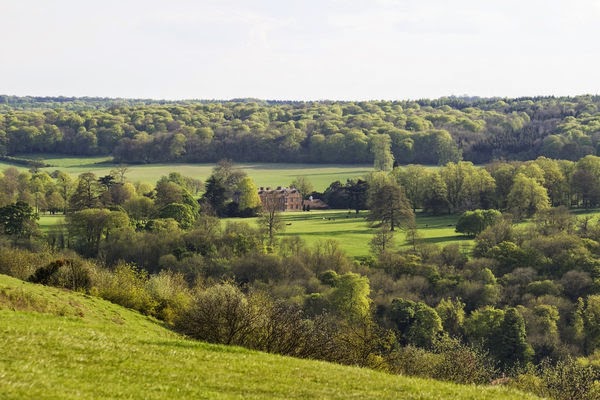 The majority of the 106 acres of Coombe Hill was once a part of the Chequers estate. It was gifted to the National Trust in the 1920's when the estate was given to the British government.
We also drove to Wallingford--the village used as filming for the British series Midsomer Murders which apparently has a huge U.S. following.
Following on we were invited to Mike Wall's (NB Independence) birthday bash the following Sunday at The Greyhound pub in Wigginton. Sixteen friends--a large share of which were boaters--settled in around the table for a convivial afternoon of great service, delicious food, wonderful conversation and laughter. We were very pleased to meet and get to know other boaters who have moorings on the cut at Cow Roast. This happy band of boaters have been friends for many years and know each other well. We felt honored to be amongst them.
A lady's day was had by me and Anonymous A--or Angel--of NB Bright Eyes who lives in Berko and has become a firm friend over this past year. We had a wonderful lunch at ASK Italian involving much laughter and good wine.
While all this socializing was taking place the inaugural meeting of the Airhead Society was planned. Having thoroughly enjoyed the excellent food at the Greyhound in Wiggington, I made reservations for our group: the very first time I've ever arranged for a table of eight people and two dogs!
On a brooding Wednesday morning--our last in the marina--we joined up with Sue and Ken Deveson (NB Cleddau), Jennie and Chris Gash (NB Tentatrice), and Carol and George Palin (WB Still Rockin').
Sue's blog provides the background on how the Airhead Composting toilet brought us together and how each set of boaters settled on this composting loo. Brilliant post Sue!! I recommend everyone read it for the background and Sue's wonderful prose.
I also knew that Ken, Chris, and George (and it turned out Jennie as well) had served in the RAF with families posted thither and yon; I knew they would all have splendid stories to tell which they did! After a lovely meal we made our way back to George and Carol's boat for a cuppa and continued conversation. For me the day felt like I had drawn on a cloak of many beautiful threads which wrapped around me close and warm.
A follow up to Mike Wells' birthday dinner brought an invitation by Sue and Jim (NB Owl) to drop by for a look at their working boat. I believe they said it was built in 1928 and used for decades to haul freight before being sold off. They've owned it for many years and rehabbed the interior for living aboard while summer cruising. Owl is a lovely example of the working boats that used to ply the cut, along with NB Hampton which is owned by their son and sits breasted up with Owl.
After making our escape from the marina we've had a wonderful lunch aboard WB Still Rockin' and Carol introduced me to the delights of British fish pie which she made. It was yummm, I am pleased to add it to our menus for healthy eating. While Still Rockin' has been moored nearby we've had the opportunity to get to know one another a little better. Les and I have really enjoyed their company.
Finally we had a delicious dinner out last night in the company of Angela once more. This time we ate at Francesco's Italian restaurant in Tring. The decor is a delight and the food is homemade--as if you have been invited home to Italy and offered a place at someone's table.
We are so blessed to have so many wonderful friends. Thanks to each of you for taking time to visit with us, break bread together, lift a glass of wine in a toast, share stories and lots of laughter. At this rate it will spring before we know it!
Posted by Mrs. Jaqueline Biggs at Wednesday, February 04, 2015

This is a lovely read, Jaq, full of warmth, humour and merriment. As a participant in "The Airhead Society" event I can vouch for the
variety of conversational topics and the laughter! Long may boaters continue to talk, eat, laugh and drink together!
Sue /Boatwif

I'm still laughing at the thought of you all "settling" on your Airhead toilets!

I see that a new Narrowboat series as coming to the small screen. John Sergent starts an 8 week series on ITV next Friday evening. I thought that some of your readers might be interested.

Safe travels once the ice melts!

Hi Sue,
It was brilliant as ever in the company of good friends.
Love JaqXX

Hi Alistair,
Sorry to take so long to answer. I am teaching 3 courses this semester instead of the usual two and technical issues (not at my end)have swallowed up massive amounts of time.

I must say all the Airhead owners I've met are pretty happy folks. I've only known of one who had their removed 3 weeks after they bought it. It seems he disregarded my advice to use a folding Army/Navy shovel and tried to clean it out with a small garden hand trowel!

We have been watching the Barging Around Britain series and enjoying it immensely--although 30 minutes is really too short to do any of the canals real justice.
Stay warm, stay well.
JaqXX