A bit of cooking, electrical, medical and a boat

I think Jaq did mention how thrilled she was with her proper sized cooker. I know it still makes her smile every time she uses it and she always has her head in her personal recipe book.
As I write this I can smell a Chocolate Cinnamon Espresso cake that just emerged and soon the smell will change to home made bread; a new recipe that Jaq says she will blog. I will say I prefer this softer texture to the Artisan bread.

If you have already glanced at the pictures you probably haven`t got the connection between electrical bits and cooking.

The cooker has a cooling fan that removes excess heat from within the casing of the cooker. it usually only comes on after the grill (broiler) or oven has been on for a long time. This fan is not to be confused with a fan oven which is a different beast altogether.

This cooling fan and the electronic ignition both run on 230v (120v in U.S.) and  this presents no problems on the boat in fact our 3000watt inverter that converts the boats 12volts to 230volts is much to big for this small load. 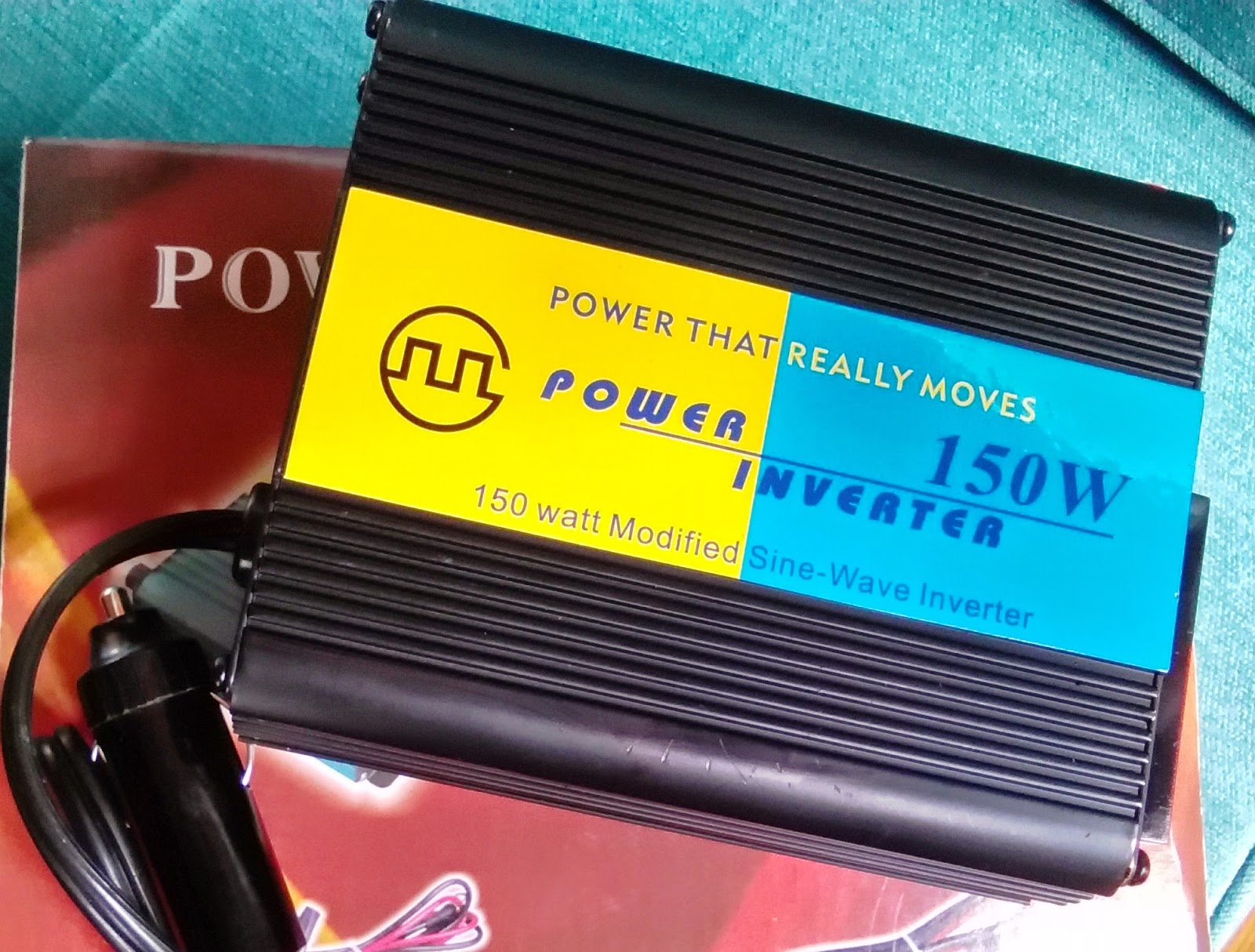 Following some inquiries on the Internet canal forum a member stated he had the same cooker and the load was about 25watts and a small 150w inverter had run his perfectly.
Our 3000watt inverter is situated under the stern stairs and is only used when the washing machine or my power tools are in use. My idea was two fold in that running a small inverter would save power and if Jaq had it installed in the kitchen life would be easier for her. 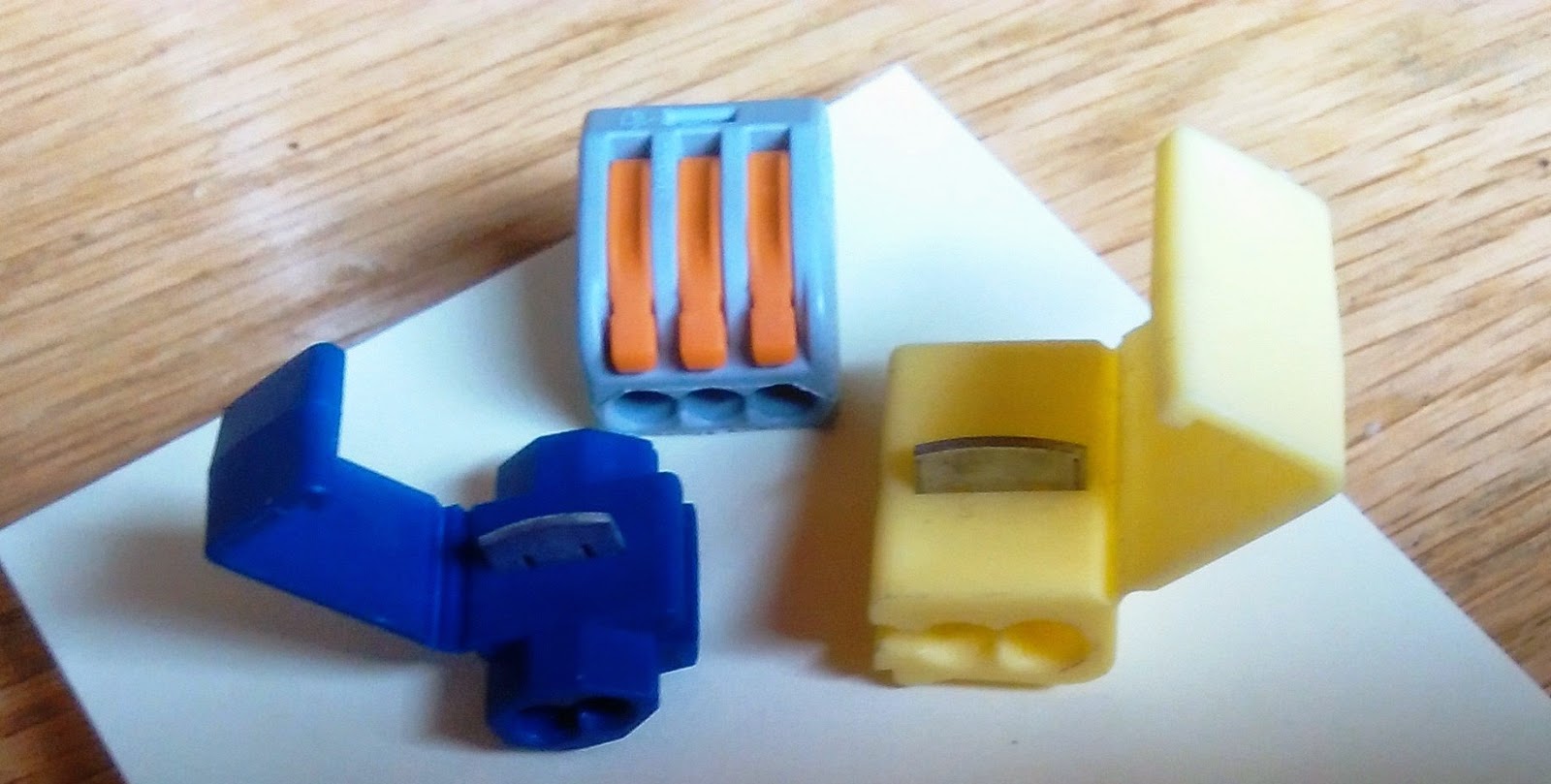 Some time ago I installed  new power cables to feed our two laptops and I allowed in the thickness for any future power needs, glad I did.
So I needed to break into the cables and feed the 150w inverter for the cooker.  Now my usual way would have been Scotchlok like the Blue and Yellow ones in the picture. Push it over the main cable insert your power cable to whatever you are supplying, squeeze the metal pin down and with one on the live and neutral you have power.
Of course my feed went through a switch and fuse before the 150w inverter.

Now what all this is about is the fact my stock of Scotchlok connectors had over the years dwindled. 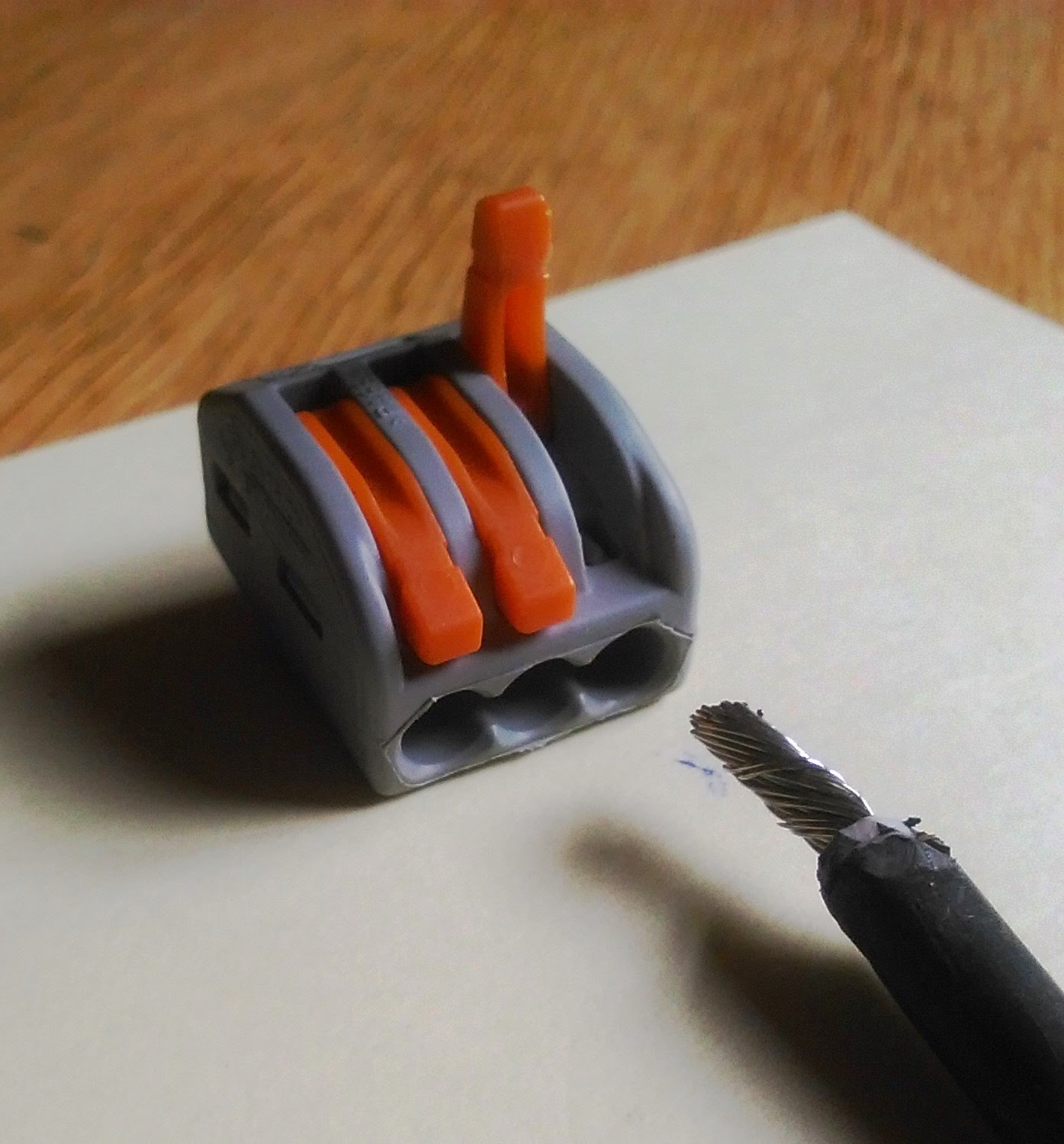 Just recently I got a train back to Watford for an appointment with the Urology surgeon who signed me off as being A1, just wish it had been the Stoma reversal surgeon but that, IF they don`t cancel again is on the 29th. 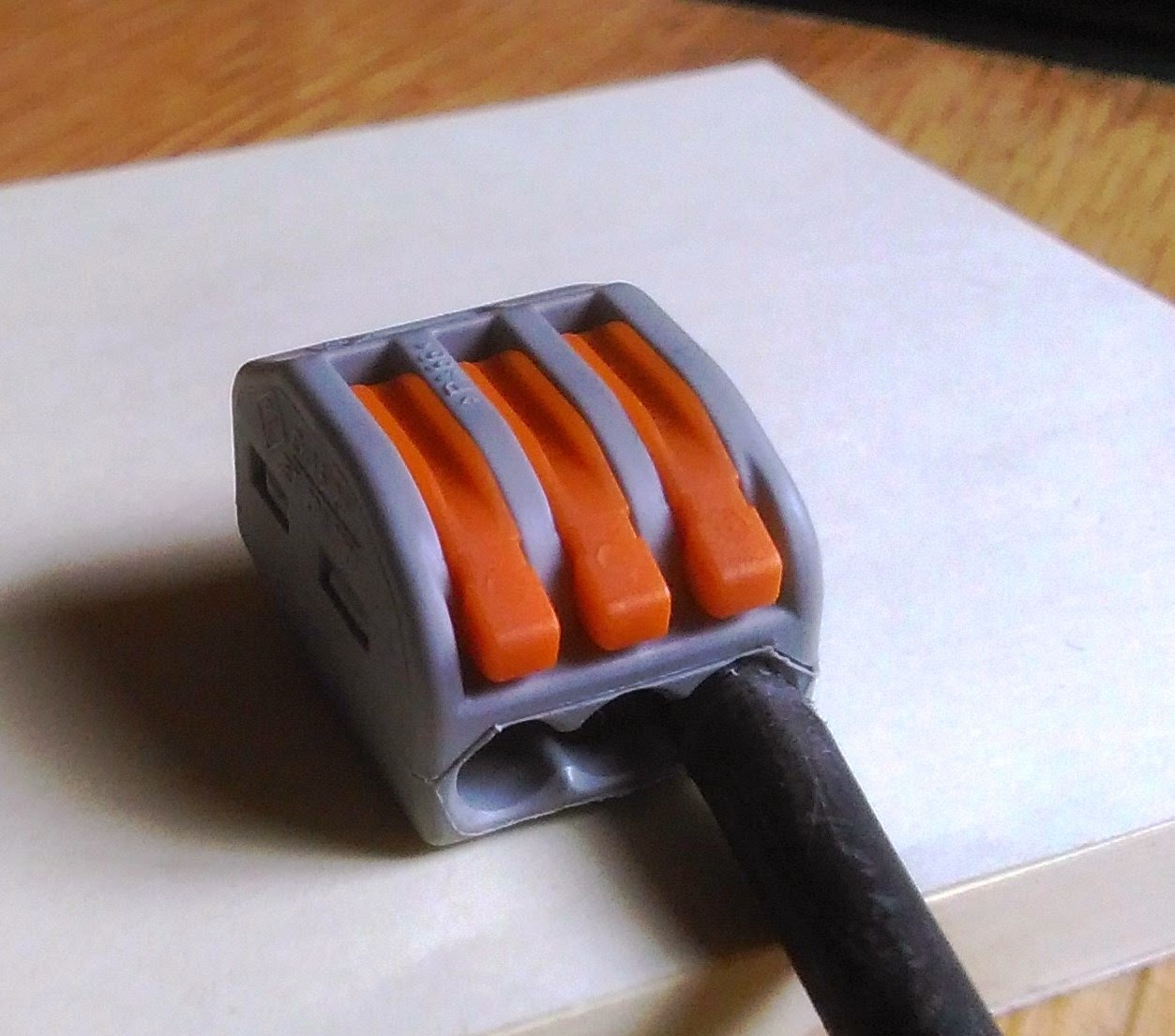 Anyway this all gave me a chance to get the connectors which turned out to be harder than I thought. One place introduced me to the Wago connectors and as my train wouldn`t wait I bought them.

Up to five cables can be connected in bigger units, just lift the locking lever push in the cable and lock down. I will say though they are not as quick as the Scotchlok that has no need to cut your main cable or cut back the insulation on your extra feed.

I must admit the advances in cable connectors has passed me by with my old stocks being sufficient during my years afloat. 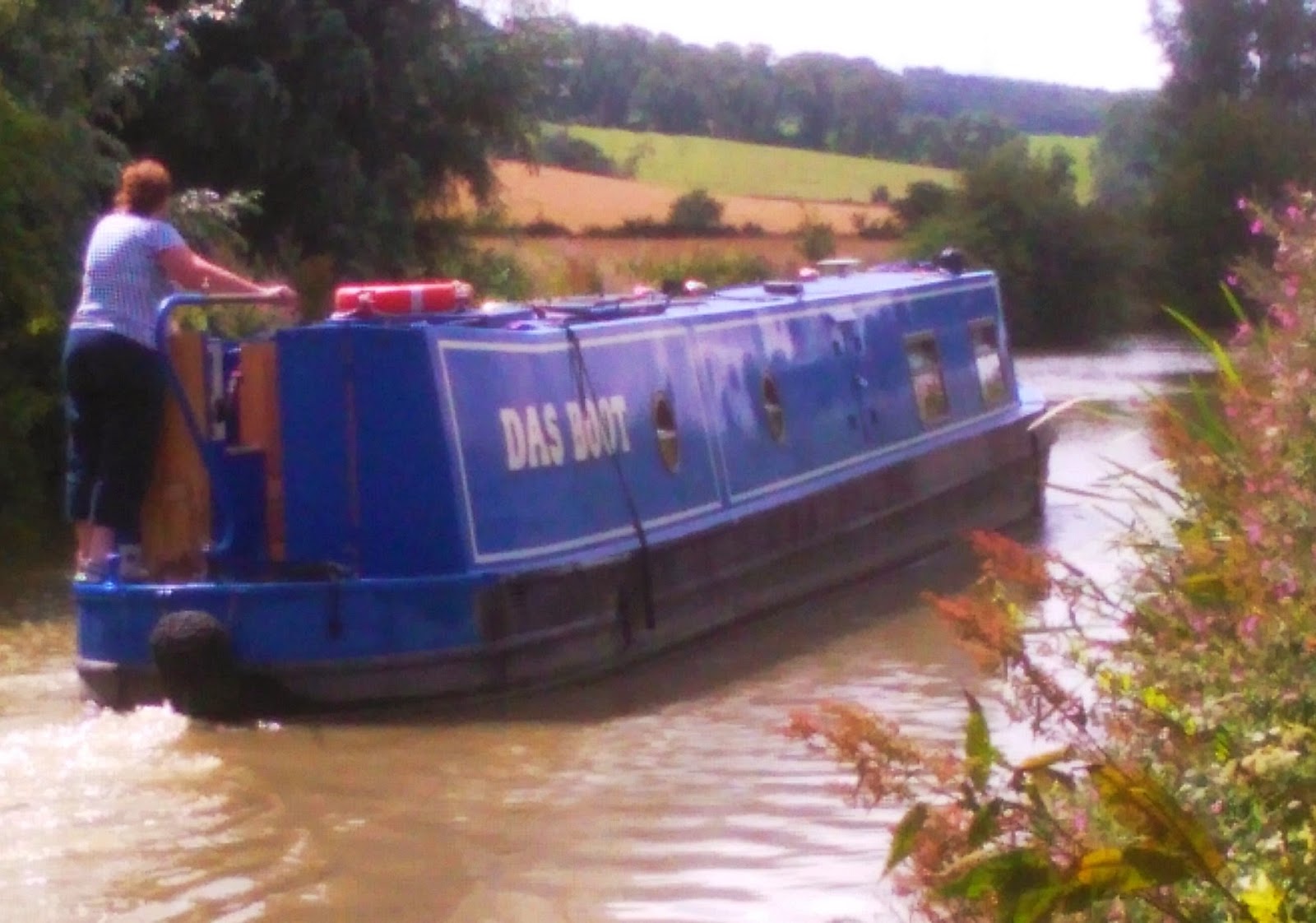 Das Boot, German for the Boat. People name their boat for all sorts of reasons but the problem with this one is it has U238 on the bow. Might be the odd old sailor still around who would not like to be reminded about German submarines. My dad, WW2 navy, would be none to happy if he was still alive. Maybe it`s all for innocent reasons, the naming, but perhaps some thought would have been nice.
I can think of examples of bad boat naming but would rather not stir bad memories so they will stay in my head.

Les
I hope those 12V cables are large because a 150W inverter is going to draw about 15A at max load!

On the other bow of Das Boot is U235.Couldn't understand the two different numbers when moore nose to nose recently. Tried Jaq's Artisan loaf but think for the flour I used I should have used the original quantity of water.Will have another go as it's so easy to do. Look forward the new recipe,
Judith
nb Serena.

Hi Tom
I am told by someone using same set up the fan draws 25w tops. Mine woks fine and have checked wires for any hot spots but the cables are thick.

Hi Judith
The different numbers solves the difference Jaq and I had of the number as the boat went by 3 times.