“Some people walk in the rain, others just get wet.” ~ Roger Miller

Chellshil was a fine place to rest for a day or two while we kept a weather eye out for a break in the rain. I made a large pot of Minestrone soup, which also necessitated making a batch of fresh Pesto--Mmmm! 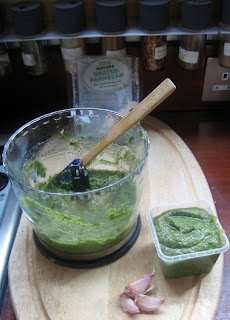 My Minestrone recipe calls for pesto and with summer supposedly readying itself for an appearance just any day now here in England, a batch of Pesto couldn't go wrong. I can always freeze two-thirds of it and thaw it into pasta some ungodly hot day in the future. How's that for thinking positive?? I made 8 cups of delicious soup--enough for dinner and lunches for several days. I figure until summer shows up, soup will go over good in the cool, wet weather.
After a few days we cruised leisurely through several double locks until the rain threatened again. We moored up for the afternoon just around the bend from Church locks as thunder bumpers formed around us. A pan of Rhubarb Crisp with Grand Marnier custard took the sting off the drizzly day.
We woke in the morning to a lovely sky--blue and bright with wisps of cloud, bees buzzin' and birds singing--until we decided to move at which point I noticed the world had gone quite still outside. No birds flew aloft--they hunkered down in the fields and shrubs; the bees had disappeared--not even a fly could be found.
Off to our right, across the fields huge, dark storm clouds were stacking up against one another as rain fell in the distance across the corn growing green and tall.

﻿Dear Sir decided he wanted to have a bachelor weather moment--when he stuck his head out the door and if it wasn’t raining he moved until it did, rather than turning on the computer and consulting the Met Weather Office as I do. All righty then!﻿﻿﻿﻿﻿
Off we went and fine rain fell by the time we reached lock 46--the second of three we had between us and Red Bull Services. As the lock filled, a honey bee, exhausted from flying and taken by surprise by the drizzle, landed on the roof of the boat. I watched as she took deep breaths, resting. As the lock gate opened, off she flew for home.﻿﻿﻿﻿ 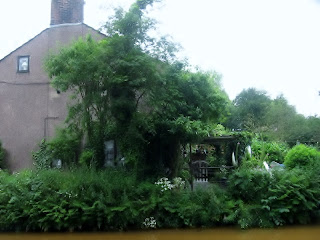 By the time we reached the service point it was well and truly raining, although not for very long. While we filled up with water, dumped the rubbish and emptied the loo cassettes, a boat went on and space opened up behind us. We decided to moor here for the day, just across from a canal side cottage with the most lush and lovely garden. As the changeable British weather is wont to do, the clouds parted a bit and it warmed up and became muggy.
Les and I walked into town, past Tesco’s and up to the Post Office to mail a belated birthday gift to a FABULOUS woman in Pullman, Washington. Sandy Field we mean you! 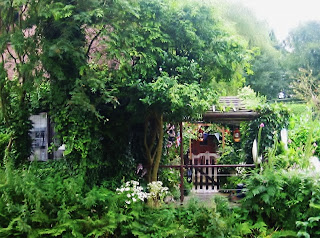 With ice creams in hand we meandered back along the towpath, chatting to other boaters. We will stock up on groceries, pick up a weekend Daily Mail television guide, cast off and cruise into the countryside. We need to decide where to go next--Caldon canal or the Maccie. It is a sublime thing to have several wonderful choices in front of us. 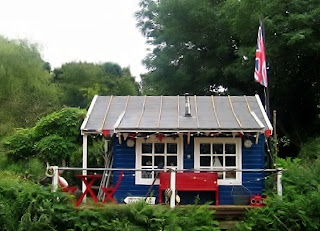