I first discovered AbeBooks about ten years ago in a Walden Books outlet at the Palouse Empire Mall in Moscow, Idaho. I had asked for a particular book and after searching their inventory was told they did not carry it but they would find it for me. As the clerk logged in to the 'Net she told me about AbeBooks: "All bookstores--be they chain concerns or local, private owners, use the same web site to locate books they don't carry in their stock. You can go online as well and order directly from the site too..." and the clerk--a university student with spiky green hair, several piercings and a nose ring, wrote down the URL for me. I never looked back! 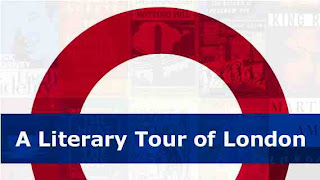 While I believe in supporting local shopkeepers rather than chain stores, I also hold with using the Internet to make certain things personally more accessible. Color me surprised to find this AbeBooks has a co.uk page as well. It's a great site to locate textbooks for classes far cheaper than buying new from university bookstores; it offers rare books as well and has an online community of book lovers, of which I am a part. I subscribe to their online newsletter which arrived in my email this morning with what I thought was a brilliant idea: a literary tour of London in honor of it being the site of the 2012 summer Olympic games.

There are several lists offered here: Novels Set In London, which included a few I've read such as Clare Clark's The Great Stink, and The Ministry of Fear by Graham Greene; and range of which I was not familiar, such as Up the Junction by Nell Dunn and Peckham Rye by Muriel Spark. From this list I have authors known and unknown to me from which to read such as A. N. Wilson's My Name is Legion, A Severed Head by Iris Murdoch, and Girls of Slender Means by Muriel Spark; Adrift in Soho by Colin Wilson and Fowler's End by Gerald Kersh.
I am salivating with expectation and delight as I scroll to the bottom of the page and find several other London/British related book lists such as Top 10 Funniest Books According to the British. Now there are several authors and books on the list which puzzle me and underscore the difference in Brit wit and American humor. I can only conclude that the British have been practising humor far longer than we in the U.S. and therefore have had longer to sharpen their teeth on subtle satire and irony. Heller's Catch-22 is an example.

As I perused this list I found the following book description which did make me laugh out loud for obvious reasons: "Tom Sharpe fans love Wilt's antics with a blow-up sex doll and also Zipser's bedroom encounter with the middle-aged Mrs. Biggs resulting in the deadly condom explosion." I'll have to read Wilt in Triplicate now yeah?? I hope Tom Sharpe does me proud!!
At the top of the newsletter on the right was a link to Britain in Pictures. A click opened a whole new world for me!
Morale & Preservation: Collecting the Britain in Pictures Series-"With most of Europe in Adolf Hitler’s hands, Britain was in a grim predicament in 1941 but that year Collins, the publisher now known as
HarperCollins, launched a remarkable series of social history books called

Britain in Pictures.
The books were designed to boost morale but perhaps also record the British way of life in case the Germans completed their European campaign by successfully crossing the English Channel. The books were slim volumes with distinctive elegant covers, but it was the star-studded array of authors that made the series really special." (R. Davies, Morale & Preservation: Collecting the Britain in Pictures Series, AbeBooks newsletter; Copyright © 2012 AbeBooks Inc. Suite 500 - 655 Tyee Road, Victoria BC, V9A 6X5, Canada, accessed 07/26/12 online.)
These amazing books undertook to capture and chronicle every facet of British life at a time when this country was preparing for war and facing an uncertain future which brought bombs, death, destruction, and fifteen years of austerity during and after World War II. I sit amazed at the foresight of a country which can think so far ahead in the face of overwhelming danger and tragedy.

The books in this series are a collector's item ranging from a few dollars to several hundred depending on the title and author. AbeBooks has an incomplete set and links to an expert on the collection. "These slim volumes were a morale booster as well as capturing a way of life--such as the canals and their builders--which rapidly disappeared after the war." (R. Davies, AbeBooks newsletter; Copyright © 2012 AbeBooks Inc. Accessed 07/26/12 online.)
Another link on the newsletter page offers collections by British publishers such as Faber & Faber, including such literary stars as T. S. Eliot, Sylvia Plath, Lawrence Durell, Ted Hughes, and Alison Uttley. AbeBooks has provided me with a veritable Olympic pantheon of authors and great reading to pursue. So many books--so few lives in which to enjoy them all!
Posted by Les Biggs at Thursday, July 26, 2012

Thank you thank you thank you. I love the unexpected variety of issues, subject you dive into with enthusiasm. As you say ... so little time and sooo much to read.
PS - we're have absolutely Lovely weather in Pullman. :-)
Karen

Sorry Jaqueline, don't mean to be picky, but...
"it being the site of the 2011 summer Olympic games."
They'll be collectors item then! LOL
Great link to the site, many thanks, I'll be browsing there for hours I guess!!

Hi Karen! I am thrilled you are still enjoying my posts AND great weather in Pullman. Summer 4.5 finally loaded over here in Jolly 'Ole and it is hot and muggy!
Much love,
JaqXX

Kevin,
Thank you for pointing out that glaring loss of an entire year! We are currently cruising the Macclesfield canal--if anyone finds my lost year--please return it!! LOL! I fixed it on the blog. Enjoy browsing AbeBooks!
Jaq