This particular post has been sitting around for a while(10days) and i  never got around to posting it. Not sure why but perhaps i was thinking folk would get bored about me harping on about my passion of canal history. Anyway this is the final post of the Oxford and at the end are some links so you can investigate the past if you wish. Click images to enlarge.
Well the weather is not looking good, the boat is held in an icy grip with no sign of a thaw. The good thing is this enforced stoppage has given me time to find the old route of the Nth. Oxford by studying old maps at the library and walking the old route where possible. Walking up the Brownsover Arm is easy as a lot is still in water, and I did this some time back, but the return to the main line is mostly under an industrial estate but looking in the right places still gives little clues of the route. 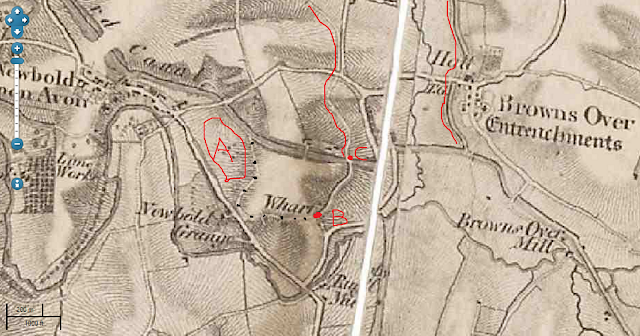 This time my interest was the route the old line took after the Rugby Wharf arm`s present terminus. I have been using some old maps on line from this site and then using the old ordnance survey maps and microfiche at the library.
The pictures above and below are the same area, and if you have ever travelled by bus into Rugby from Newbold village the bus would have come down Newbold road in the bottom left of the picture below.
A. Newbold Quarry
B. The present terminus of the Rugby Wharf arm. (Willow Wren base). The black dotted line is the old line on it`s way to join the present canal by the Quarry. Along Foster road the canal bed is still there.
C. Main line entrance to Ruby Wharf and winding hole. The line heading off the page here is the route of the old line coming from Brownsover via Cosford village. 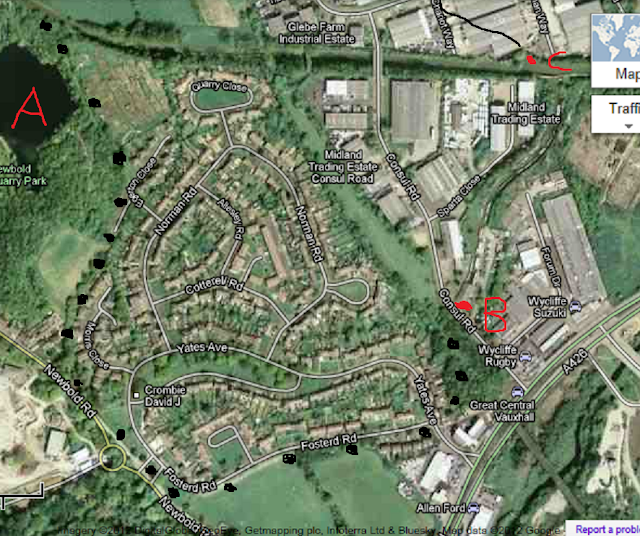 I have photocopy of a map dated 1828 titled `Intended improvements to the line of the existing Oxford canal`. It shows the old route snaking across fields as it followed the land contours and the proposed new route in bold. In case anyone wants to look, Rugby library has it under lock and key in the transport section of the map cabinet.
Now a combination of this map, a map dated 1947 and modern day maps the route can be traced quite easily. An online map i found useful can be found HERE and you can click on the drop down box to 19th century.
Also online HERE is the wording of the act of Parliament to do the straightening. Page 504 lists the new sections to be cut including one to join the Oxford canal at Joseph Astell`s garden in Ansty. Page 507 then lists the sections to be dis-continued following these new cuts being completed. The place names listed are mostly un-familiar until you go searching old maps you can then seek out the site and find the old route most of the time albeit in some cases very overgrown. Google earth is also good as even when a canal has been filled in by farming there are still scars visible from above.
﻿
Posted by Les Biggs at Sunday, February 19, 2012

Sound like you've had a brilliant adventure there Les, researching the past.

Carol
It`s my retirement hobby to read about and seek out anything canal related.
Les