Bridge 58 at Rugby, the Tesco stop, was also home to a retail park called Elliotts Field. It was a bit tired and not much of a fix for the retail therapy seeking boater. It was after all 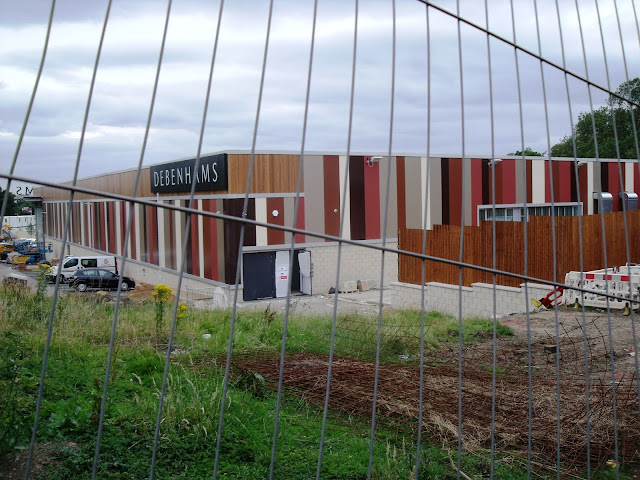 a mix of pure retail, Next, T K Max etc and the industrial side with the likes of DIY stores and Carpet Land. Above is the view from the towpath entrance, the car wash was to the right. Now with some 19 units  of nothing but pure retail dominated by 30,000 sq ft of Debenhams closely followed in size by Marks and Spencer this could be a future stopping point for boaters. Dare I suggest fellas give the other half the plastic and let them hit the shops while you watch the boat while partaking in a sherbet or two. Of course you must not confuse this with a Sherbet Dab which is a cab. There is no "r" but Londoners say it that way. Oh and by the way probably because of legalities over lease Halfords is still on site at one end. Lads don`t let her tell you there`s a shop selling man bits because as you know H is fine if you want to buy a bike or fluffy dice, stick to the sherbet plan. 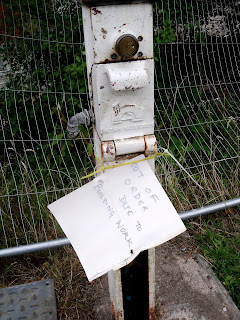 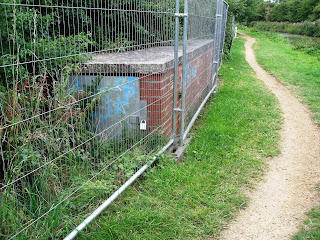 They can build 300,000sq ft. of retail units costing multi millions but the tap is out of order. I do hope CRT don`t need the stop planks in a hurry.

All due to open by Christmas and to Jaq`s delight it has an ED`S easy diner. This LINK will take you to a piece Jaq wrote about her childhood memories of an American diner.

Nice to see the site nearing completion maybe C&RT will now reinstate and refurbish the water tap and tow-path there. It's only been out of action for a year or so.
Nice to have an M&S near the canal which will save me walking into town for.
Good that you are able to relax and enjoy yourselves now.
Maybe we will meet up before the end of the year.
Have you finished painting Valerie yet?
nb Oakfield

Hi Keith
The painting is ongoing but are making progress.
Two coats on one side, two more needed. The rest has been rubbed down but as usual will find odd bits needing attention.
Les

Huff! I am not impressed. My favourite shop, Pets at Home, used to be there! How DARE they get rid of it.....