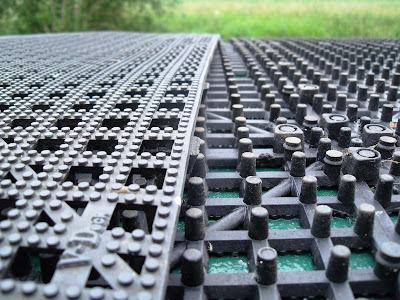 The nice weather has finally arrived and so the re-paint of Nb Valerie has begun.
The front deck has the V-Deck style of matting (pic right). it`s been down for nine years and as you can see the top surface to the left of the picture is in good condition. The right hand side shows the side that presses against the deck as we step on and move around. Real tough stuff that certainly can take some punishment. Not sure if these are still manufactured as a 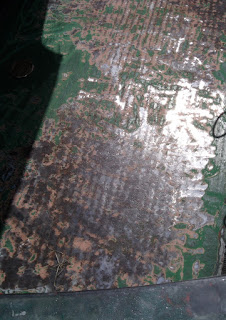 Google search fails to find the V-Deck name. Perhaps they were expensive and cheaper products took the sales.
The main problem is they dig into the deck paint and cause rust. Although perhaps after nine years and the fact the deck paint might not have been suitable in the first place may have contributed.
I used an angle grinder fitted with a flapping disc to remove the paint and loose rust. 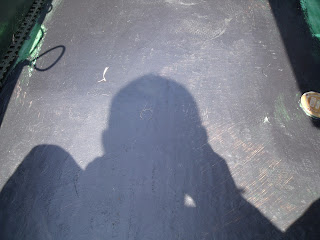 Next it had a coat of rust converter. 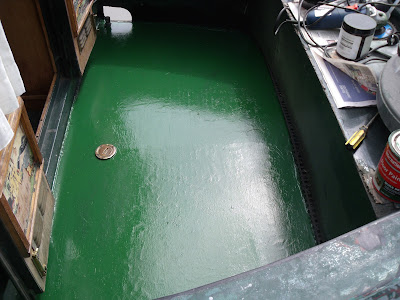 The first coat of paint was International floor paint that dried within two hours but needed, so the blurb says, five days to fully harden.
Time is something we have plenty of so letting it harden was not a problem.
A quick light sand gave it a key to receive two top coats of a smooth metal finish paint similar to Hammerite. I left it two days before putting the matting back down. Time will tell if the paint is tough enough. 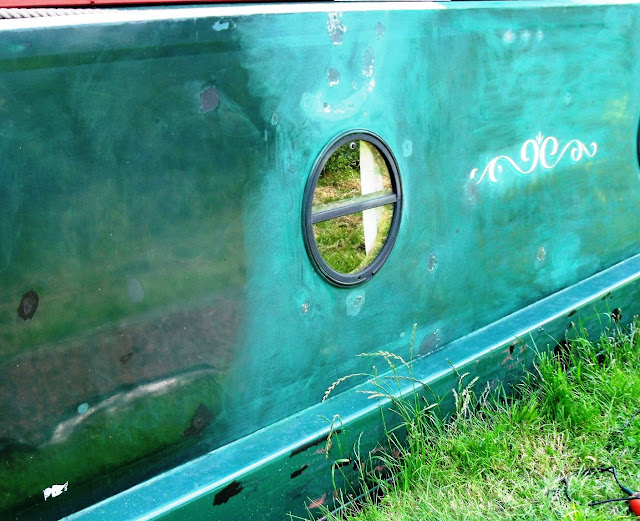 The front deck broke the monotonous job of sanding the boat. we now have two sides sanded with rust spots filled and sanded twice but still needing minor attention. The bow and stern have yet to be tackled but as I said time is something we have plenty of and Jaq and I have no intention of doing this day after day.

Looks all well and good. So what about the fancy lettering and related? Does it getremoved and painted as well. And then I wouldassume a floating sign painter comes along and refrehes the name and related.

Stationary residence or floating, they all require regular maintenance and sometimes more than just a regular repait.

Please hurry and get yours finished so we can commission you to do ours!

I know it's not the traditional way, but consider getting the name and scrolls done in vinyl - looks fab, lasts longer than paint and costs less, and unless you tell people (or someone comments on your post and recommends the process) no one can tell the difference from 2 feet away - not even a professional boat painter, as we discovered last year on the Maccie ...

Doing a grand job, team Biggs! Looking forward to seeing you again in the near future once we are heading north from the Thames.

PS Expect a deluge of complaints about not remaining true to tradition - I'll take responsibility for that ;-)

Hi Jesse
Needed doing, big job but at least we have the time.
Lesxx

Marylyn
I would not wish this amount of work on anyone so foindoing yours is a big NO.
Lesxx
Vinyl.....no comment.

Hi Bryce
The name etc will gradually almost dissapear or at least be flat and faded. Hope to find someone to re paint the name once we have finished.
Les