I`m sure the boaters amongst our readers know how a staircase flight works but me and Jaq have many friends and family back home who have no clue. Some of our readers might be new boaters who will enjoy the post. So experienced boaters are excused reading this post; feel free to do the washing up or carry on knitting.
Bunbury staircase locks are the first locks after leaving Nantwich on our journey to Chester. This staircase is made up of two locks and raises/lowers the Shropshire Union canal 15 feet, 7 inches.﻿
There are two lock chambers, and three sets of double gates. The gates in the foreground of the picture above separate the two chambers. The boat in picture 1 above is coming into the top lock to go down. Normally we would encounter just one lock, as you see it in the top picture. We would lower the water level, open the bottom gates and carry on our way. The difference here is two lock chambers to be negotiated. So in picture 2 below I have turned around and I am looking down at the second lock which has one boat entering to go up.


The difference in canal levels from the top lock in picture 1 to the bottom lock in picture 2 is as I mentioned, 15 feet, 7 inches and it will take two courses of action for the boats to swap places. With all gates shut the water is released from the top lock (Pic 1) into the bottom lock (pic 2). This will make the water level in both chambers equal.

In  picture 3 above, the boats are passing each other as they switch places. The gates they are passing through are the ones in the foreground of  picture 1. 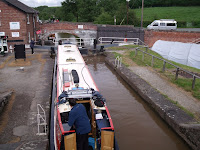 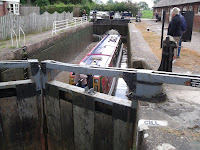 Things are slightly different when three boats want to use the locks at the same time. Two boats coming down and one going up is possible as is one down and two up. This then becomes the "Bunbury Shuffle". 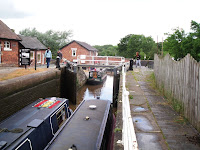 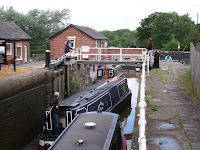 On the left two boats have come down in the top lock together and one boat has come up on its own. The gates are being opened between the locks. As in picture 3 above, the boats must now swap places so it is time to do the "Bunbury Shuffle". On the right above, one boat going down moves forward and into the vacant space next to the boat going up. The single boat facing us comes into the vacated
space, below left. The last boat then 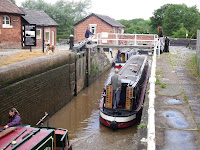 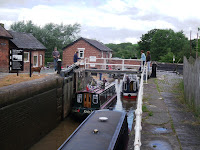 moves forward, below right. The first boat in has moved across the lock to make this manoeuvre easier for the last boat in. The gates will now close and the two locks will be filled or emptied to take the boats to the upper or lower sections of the canal.
Posted by Les Biggs at Sunday, June 10, 2012

We did the 'Bunbury Shuffle' on our very first hireboat holiday many years ago, it was terrifying! Luckily we had a very bossy individual in one of the other boats ordering everyone about :-)
Kath (nb Herbie)

Not the sort of thing you'd want to do with a crowd watching! Can it be done with four short boats? You'll have to give it a try on your way back and let us know!

Hi Kath
All great fun working through a lock in a different way. Sometimes you can tell the Gongozelers are thinking they`ve done it wrong when they see boats entering from both directions.

Hi Alistair
Yes it can be done. When the gate opens 3 boats need to fit on 1 side of the lock. This then creates the space to shuffle into. All the boats would need to be short.