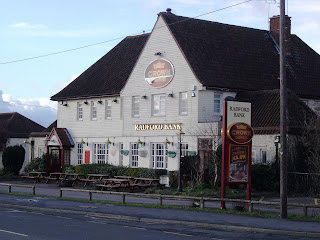 Radford bridge (98) was the destination for a Sunday roast. We had as normal moored out in the countryside but the 2 mile walk was well worth it.  Sunday £6.99($10.50) with 4 choices of meat and as many visits to the vegetable pots as you want.  Mon-Sat the price drops to £3.89 ($5) with the same quality but one less choice of meats. The roast is served 11am thru to 9.30pm
The bottomless Cornish ice cream bowl at £1.99($3) was just not to be missed and after all the walk back would help burn some calories.
﻿ 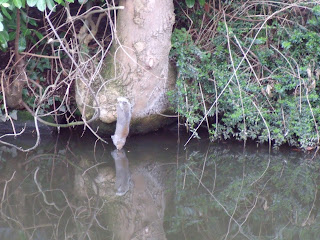 Now for just this post....animal corner. This little fella did his aerial act across the trees then came down for a little refreshment. 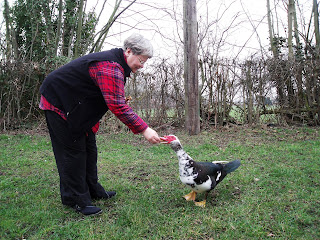 I did tell Jaq it won`t go away if you feed it, and it didn`t even hopping over a moving water hose as I wound it after taking on water. 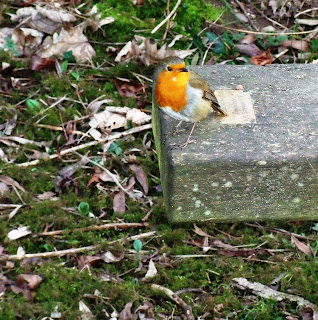 Robins are such posers always ready for the camera. The Robin in the States is about 3 times the size of the UK bird. 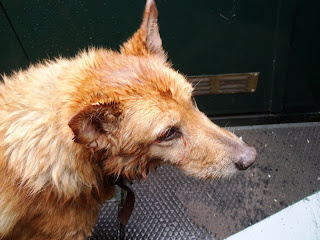 This 14 year old lady is for sure not posing. She is on our back deck soaking wet, panting and shaking real bad. I spotted her for the first time on a passing boat as we had lunch. The second sighting was for her, very lucky. She was just a nose and pair of eyes when I spotted her on the offside as we slowly rounded a bend and I think she was almost finished. I reversed and just managed to get the boat into a position that enabled me to grab her by the neck and haul her aboard.
Jaq dried her off while I first tried the boat that had passed us earlier but no one was aboard. I just went down the line of boats knocking and found the owner on a boat further down the towpath. The dog had little function in her rear legs and an abscess on the eye that had burst, both conditions the owner said were pre her water adventure. Jaq and I went on our way happy we had rescued the dog hoping she (the owner) would keep the dog safe.﻿
﻿
Posted by Les Biggs at Wednesday, March 07, 2012

Well done in rescuing the poor dog. Hope she survives that ordeal.
Karen

I hope her owner gets better treatment from her caretakers when she is 98.
jaq

I hope her owners thanked you!

She does look the very picture of 'mumchance'....

Well her "owner" was totally oblivous to where her old pal had been; the dog had to have been in the water for a good hour or more, struggling for her life.

Then the owner actually called the dog to come to her after seeing we'd rescued her, as if the poor, crippled, exhausted animal could even lift herself. I was spitting mad and had to go below. She did thank us but she behaved as if it was really no big deal her dog nearly drowning fifteen feet from her boat, while she was down visiting with the neigbors and they were all no doubt visiting another planet probably jacked on spliff.

Sorry for the rant. It pisses me off when people treat animals like a thing they own--like a car, or a lawn mower or a washing machine.
Jaq

Totally agree. If she was that bothered she would have been out looking for her. The least she could do is put the old girl out of her misery if she is too busy to look out for her properly. You are dog angels. Carol BV

Such a shame the way the dog walked away from our boat her back legs stiff and she was hopping from side to side as if her joints were not functioning. Anyway all we can hope is the dog is not hurting.
Have a nice holiday Carol, won`t see you as we are past your cruising range.
LES

Jaq, you and Les did a truly good thing saving that poor hound.

But for every such a one there are two of the likes of Mortimer Bones, who saved poor Boots.

Please don't think too badly of us English. Most of us are animal lovers, not merely animal owners.

Hi Lynne,
Lovely to connect with you at last! It's alwasy great when a long time reader reaches out to us for the first time; so glad you are continuing to follow along and sincere thanks for the congratulations--we grow closer with every passing month and thank our lucky stars we found each other. :)]
Les and Jaq

John,
It was clear to me after my first week here in the U.K. That most Brits really love their animals, and take excellent care of thier furry companions.

My attitude comes from America, where more folks than not in my experieince treat animals as a thing to be owned, and discarded when a pet no longer pleases them, or becomes in some way inconvenient.

This is why on the whole I prefer cats. Dogs made a very poor bargain in my opinion when they opted for domesticity and unconditional love for humans in return for bed and board at the minimum.

A cat will not love us just because we feed and shelter it. If a cat loves us it is solely and completely because it chooses to do so, for reasons of its own.

And if it doesn't please them they may or may not still take advantage of anything a human offers, knowing they are wild enough at their core to go it alone and fend for themselves.

But that is just my opinion. I'm extremely jaded when it comes to homo sapiens.
Jaq

Well Jaq, you know what they say, 'dogs have owners, cats have staff'....

Thomas and China are definitely of that opinion too!