"Continuously Cruising" it says at the top of the page, but what exactly does this mean? Boaters without a permanent mooring do it and they are referred as continuous cruisers. The Oxford dictionary definition is here.

British Waterways--our landlord--defines these words here. Now this link is just for those readers who are not aware of the rules, including friends of Jaq and I across the pond. You can easily reduce your life expectancy by wading through all the rules and regulations, and genuine boaters without a home mooring know the rules; they prefer to be cruising rather than reading the rule book.
A very rough but fair way of summarising the rules are:
Unless canal signage says otherwise you may moor for 14 days and then move on.
How far to move is another debate but the rule seems to say one must move into the next district. For U.S. readers this might equate to moving from town to town. We have today, as I type this, travelled 3 miles, but my belief is as long as your journey moves gradually to pastures new and you don`t keep doubling back, British Waterways are happy you are complying with your licence conditions.

Anyway this is not quite what I had in mind when I decided to write this post but that will come later. My point is how we boaters divide the 7 days of the week between cruising and mooring up. We recently moored up to stroll into town to re-stock the galley and have a wander through the weekly market. After filling the water tank (we actually ran out of water for the first time ever) we moved 3 miles further along the canal to peace and quiet.

Ahead we have 5 locks and then within a mile 15 locks so the decision tomorrow is 5 locks or 20 if we decide to move. This is what I`m getting at: do Continuous Cruisers move Mon through Friday and moor up for the weekend. On whatever days they do cruise how many hours do they cruise per day? Would 20 locks be considered one day's cruising for some?

I know the human race are a varied species and we all have our ways of passing through our span of life. For sure I think boating is a wonderful way to finish whatever length of sentence I have been allocated and hope it goes on for a long time yet. Remember the recent blog on the canal side deaths? Some of us get a very short sentence.

I have met people living afloat who attempt to see as much of the system in a given time, perhaps 2 years, so they spend a lot of time cruising quite a few hours a day.

Some I know moor on Sunday for religious reasons and are therefor Mon-Sat boaters.

There are the early birds who are cruising while others sleep and who moor up for the day very early every afternoon. In summer this is a good move as the holiday boats all look for moorings in the late afternoon so finishing early in the day gets you a mooring in the popular spots. Is the early start their way of getting in more crusing hours?

Some boaters will never moor in a busy spot other than to shop. Others seem to need the company of another boat. How many times have we moored miles away from towns and along comes a boat and moors a few hundred yards away us. Surely 15 minutes more cruising would find them a better mooring.

Some of our trips of late are recorded here purely from memory as I do not keep written records of lock and miles traveled on a daily basis.
7 miles 2 locks
9 miles 2 locks
8 miles
2miles 2 locks
Now as to whether these trips were 2 hrs., 3 hrs., weekday or weekend, I have no idea as we do not follow a set pattern of cruising such as weekdays only and stopping over the weekend.
What until now has been my casual laid back attitude to cruising hours on any particular day might be a thing of the past if this article below is anything to go by. We must stand together on this; the EU has interfered with our red diesel and now wants to restrict our boating time. 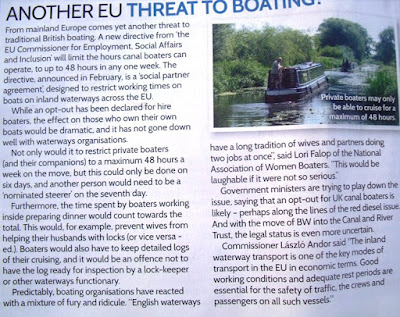 
I will be calling on you all to protest in the strongest way to Brussels but until we can group up and decide our plan of action I want every boater to stop buying Sprouts. Other actions will be decided at our first battle meeting to be held on 1/4/2012. or 4/1/2012 in U.S.
Anyway folks I just wrote this because the combination of our bog heading and the WW article got me thinking of different boaters cruising habits. I do know for sure that we cruise a lot less hours than when I was solo boating and I must say I like it a lot. This is after all retirement so no rush and my solo boating motto "there`s always tomorrow" still stands.
We all cruise differently but can you imagine if we had to have tachographs fitted like the trucks.to register drivers hours.
Posted by Les Biggs at Thursday, March 29, 2012

Hi you two - this got me thinking .... Lori Falop ... an anagram of April Fool ... and its in the April edition. Ithink it'll catch a few people out.

This is of course the new April edition of Waterways World... Will you be explaining April Fools Day to your US readers?

The EU is using a blunderbus to kill a mosquito! IF we have to have one of those devices it will be disconnected at least every other day! I did notice you were using April Fool's Day for your protest, and I am quite sure all the UK growers of Brussell Sprouts will be quite ticked off!
One of your North American friends, soon to be in the UK and taking up cudgels and flaming pitchforks.
Mike in Garnet.

Ross, Alf, Roger, Mike Sarah
Glad you all enjoyed that one. Sarah, Jaq says the U.S. folk are all clued up on April Fool.