As i cruise around i find the history of what is now my home absolutely fascinating. The present day world is there to see but a 200year old canal system that i now live on hides it`s past be it because of mother nature or more often human intervention.  It is there to research and as others like to follow other pastimes in retirement i have chosen the history. I hope others get some enjoyment from my blog that tends to be different to other boating blogs. Don`t get me wrong, i enjoy a huge number of  boaters blogs for their content and style of writing and hope we can all blog as one big happy family. 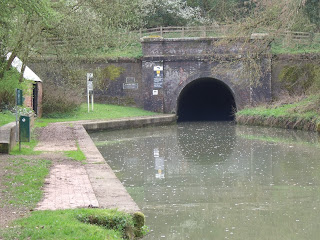 Late 1793 a contract to build Blisworth tunnel at £10 per yard was negotiated. Within a year the contractor was failing miserably and the canal company took over but by 1796 so much water was entering the workings that work had to stop. It was recommended to carry the canal across the hill by lock flights, this was turned down and the solution was to start the tunnel more to the east at the Blisworth end. Perhaps this accounts for the curved approach we now have as we approach the tunnel entrance. (not seen in the above pic)

﻿
﻿So again work started now at £16 per yd -- which reminds me that the original cost for a branch to Daventry was estimated at £6000 and i`m wondering IF they ever build a Daventry Arm what it will cost.--  but this soon all but stopped as it was felt work needed to be done elsewhere on the route. 1802 is the next significant date because a new lower priced contract at £15 was awarded (must be when compare the market.com started) and Blisworth Tunnel was finished in 1805.

Over the years a lot of repair work went on but in the 1980s the tunnel was closed for some years for massive work involving re-lining a large part of the tunnel with concrete rings. Click here.

Back to 1797 and a road was built over the hill to transship cargoes, this was soon followed by a Tramway that started at the wharf  next to the Mill at bridge 51 and ran to the bottom of the Stoke Bruerne locks. It was proposed to continue it to Cosgrove but the decision was made to finish the canal rather than have to long a Tramway. If you walk back from the tunnel on the non towpath side 2 GJCCo. markers can be seen and it`s
along here the Tramway ran. 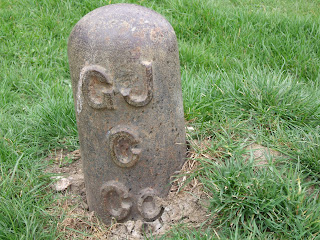 As for the rest of the route across the hill i`m not sure if any trace remains although it has been investigated in the past. Click here.
Posted by Les Biggs at Tuesday, April 05, 2011

Aren't you a love keeping an eye out for my nettles whilst tracking canal history in the area. Mmmm! After a lovely day of scouting about on the canals it would be heaven to dine on a freshly made lasagna layered not with spinach but yes! Nettles!

Lasagna, very nice but what will it taste like with nettles i wonder.

Ian and I were lucky enough to view the work relining the tunnel in 1984 (I think it was). The massive tunneling machine was impressive cutting and lining with those huge concrete rings as it moved through.
Karen

LOL! Maffi, I don't know what trad boater's fare is, but Les is going to experience a whole new realm of eating--which he's had a taste of here and seemed to enjoy; although I have to say I was shocked a man from the land of beef had never had a hot roast beef sandwich! Who knew that was an "American" thing.

Les, if you like the taste of fresh spinach layered into lasagna or scrambled eggs florentine, then you will love the tender nettle leaf tips. I can only speak for myself but to me nettles taste like MORE, please! Wait until you experience their medicinal benefits! If people really understood all their health giving qualities there would be no nettles to be found. :)